I enjoyed Martin Scorsese's "Shutter Island" as a kind of retro-Universal Pictures "old dark house" horror movie re-imagined by Hitchcock in the 1950s Technicolor textures of "Dial M for Murder," "Rear Window" and "Vertigo." As Scorsese himself described a similar project in 2007's "The Key to Reserva," it's...

When you see the back-projection [or chroma key] on the boat going to Shutter Island in the first scene of the movie, you'll probably get the idea (even if you don't consciously notice that it's back-projection). The effect isn't as obvious -- shaky or grainy -- as in '50s Hitchcock, but it has that same air of hyper-unreality that suits the material just fine. If, however, you don't pick up on what Scorsese's doing by the end of the first scene, the pounding, churning, blaring über-Herrmann-esque score as the main characters approach the creepy insane asylum/prison/fortress (actually the "Passacaglia" Krzysztof Penderecki's Third Symphony) ought to darn well clue you in.

This movie is a carnival ride, and I was happy to go along -- though I probably enjoyed it as much for what it is not (another collection of hackneyed Scorsese mannerisms, like "The Departed") as for what it is (a knowledgeable, atmospheric genre exercise -- though Glenn Kenny argues eloquently that it may be more than that: perhaps a feature-length remake of Scorsese's 1967 short "The Big Shave," "a chronicle of a man who simply cannot stop hurting himself...").

There is a moment, right at the end, that goes to the heart of Scorsese's tortured Catholicism, raising personal questions about sin, guilt, punishment and moral responsibility and recasting all that came before in a new, even redemptive, light.

Speaking of which: Quite a few critics tweeted about the difficulties they had reviewing "Shutter Island" without giving away its Hitchcockian plot twists (Polanski's "Ghost Writer," too). That's why I rushed out Friday afternoon to see it before the reviews spoiled the fun. Some critics made comparisons to other movies that gave away far too much about this one. And Michael Phillips of the Chicago Tribune confessed:

While certain films -- "Shutter Island," opening today, is the latest example -- contain a twist only a loon would reveal in an opening-week piece, other, less twisty narratives get dissected a little too fully. To wit: There I was the other week, writing about "The Wolfman" tra-la-la, and I'm talking about this and that and then, cavalierly, I'm dealing with the climax and before I know it: spoilers, without the necessary warning.

Phillips is somebody who takes his responsibilities to his readers seriously, and I appreciate his honesty and self-deprecating humor here. And he raises, once again, the Eternal Question: Why is it necessary, in a newspaper or web review tied to a film's theatrical release, to describe the plot at all, beyond a simple statement of the movie's premise? If a review contains more than one paragraph of plot synopsis, then the reviewer is most likely trying to pad the word count because he/she doesn't have much to say about anything else. 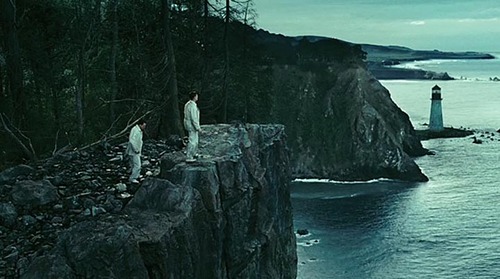 Two federal marshals (Leonardo DiCaprio and Mark Ruffalo) visit a spooky old asylum for the criminally insane located on remote, Alcatraz-like island from which no inmate has ever escaped, investigating the disappearance of a murderess. A storm is rumbling on the horizon, and they find themselves stranded in a house of psychological horrors...

Isn't that enough? It doesn't prevent the reviewer from going on to mention other noteworthy characters who populate the movie, or particular scenes or images or directorial touches of interest -- but it doesn't lay them all out so as to reveal the narrative shape of the movie, either.

Above, I mentioned a couple of significant thematic developments (one of them in a quote from the Muriel award-winning Kenny), and how they are related to key Scorsese themes, without having to reveal anything about the story or the characters that might spoil your ability to enjoy discovering them for yourself. If you were to come back after you'd seen the movie and re-read this piece, you would know specifically how these things fit into "Shutter Island" -- but, until then, nothing has been given away. The reviewer might even use certain descriptive metaphors that are appropriate, but only reveal their full significance to someone who's seen the movie. (Like, I don't know, a reference to Charles Foster Kane's childhood going up in smoke, or something like that...)

If a critic wants to really get into the movie in spoiler-depth, that can easily be done in a later, feature-length piece with the appropriate warnings for readers who haven't seen the movie yet. (Indeed, it makes more sense to wait a week or two simply to give readers the opportunity to see the movie first; I'm appalled at the narcissism of reviewers who behave, even in tweets and blog postings before the release date, as though they're writing for people who have already attended advance press screenings, not the moviegoing public.)

On the other hand, I've received complaints from readers who thought I'd spoiled something because they'd already seen the movie (or read so much about it elsewhere) that they thought I was giving something away -- something, they failed to apprehend, that would only have become noticeable once they knew the specific reference.

Do review spoilers bother you, or do you think critics ought to just assume that anybody interested in reading about a movie (whether it's a review or another form of criticism) has seen it first? Recall any particular critics who are notorious for spoilers, or any who are exceptionally conscientious about it?

P.S. One thing I thoroughly appreciated about "Shutter Island" is the way it looks. (It was photographed by Robert Richardson, no less.) The movie is physically impressive, using locations, sets and miniatures that are actually photographed with a camera and some light. There's even a credit at the end for the crew that designed and built the cliff set. Yes, there's a heightened artificiality to much of it, but at least you can see it is concrete reality viewed through a lens, not something with no substance or dimension generated completely from inside a computer.