Putting NYFF in its place 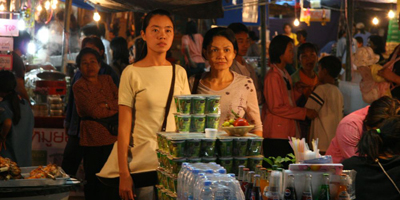 From "Syndromes and a Century."

Manohla Dargis (one of my favorite critics) does a fine job of putting the New York Film Festival into perspective in today's New York Times. This is very much the kind of realistic historical and aesthetic evaluation I've been hoping somebody would write, ever since I posed my own questions about the role and relevance of today's NYFF, in posts and comments here and here. Dargis writes:

Good, bad and sometimes just blah, most of the selections in the coming week support Mr. Peña’s assertion that the festival represents something like the state of the art. Too bad the fine art has to share precious shelf space with white-elephant frippery like "Little Children" and "Marie Antoinette" (2006). Along with the similarly audience-friendly film "The Queen" (2006), which was released in theaters the day after it opened the festival, these selections feature the bulk of the recognizable faces in the event. All three are red-carpet bait, the sort of star-gazing entertainments that attract the mainstream-media attention that is so crucial for festivals from Cannes to Los Angeles. All three are also being released by a studio or studio division, and are among the small set of English-language films that will dominate awards chatter until the Oscars in February.

Given the increasing competition for the audience’s attention, it would be easy to justify putting any one of these three in the festival: films like "The Queen" sell tickets (and newspapers), and probably make board members happy. But it is harder to justify programming all three in a festival with just 25 slots in its the main section. The New York Film Festival isn’t a grab bag; it’s an elitist event for film lovers willing to shell out as much as $40 a show. In a D.I.Y. world with too many choices, including an estimated 600 film festivals, some of which have seriously deep pockets and no qualms about pandering to their audiences, elitism is a virtue. It’s also this festival’s greatest strength.

The public’s appetite for serious work of the sort that has defined the New York Film Festival since its inception in 1963 has diminished, at least in theatrical terms. The generation that watched Jean-Luc Godard’s "Masculine Feminine" (1966) at the festival in 1966 and continues to get to Lincoln Center this time of year, still sometimes frequents its local art-house theater. Not so, apparently, that generation’s progeny: a similarly large and dedicated younger audience for filmmakers like Mr. Weerasethakul ["Syndromes and a Century," also shown in Toronto], whose films show at prestigious festivals the world over, racking up ecstatic reviews along the way, has yet to emerge in America. That said, the vanguard of fiercely engaged cinephiles blogging online about the latest in Korean cinema suggests that a new generation of passionate filmgoers could emerge with more nurturing.

There are a multitude of complex, interconnected reasons why foreign-language cinema has taken such a hit, including its displacement by American independent film in the public’s over-multimedia-stimulated imagination. In this climate small distributors are finding it difficult to take chances with challenging, difficult, thoughtful (each adjective another kiss of death) foreign-language films, even when individual titles come equipped with glowing notices and the imprimatur of a world-class festival like Cannes. When even well-received American independent films like “Old Joy" and “Mutual Appreciation" are facing a tough market ride, it becomes increasingly difficult for a director like Mr. Weerasethakul to get a toe in the distribution door. His films don’t look, sound or play like the usual Hollywood or Sundance fare; they are, like their director, sui generis.

It’s great that “Syndromes and a Century," which has yet to find an American distributor, is on the menu this year; too bad that the entire program isn’t similarly adventurous. It has always been the case that some good films, like Jia Zhangke’s “Dong" and Tsai Ming-Lian’s “I Don’t Want to Sleep Alone," both of which showed at recent festivals, don’t make it into the New York lineup. ["Dong," shown in Toronto, is a companion piece to "Still Life," which won the Venice festival this year and was belatedly added to the Toronto line-up, but neither "Still Life" nor "Dong" is in NYFF.] Festival programming is always a matter of timing, taste, desperation, politics and logistics, not to mention worthiness. But if the New York Film Festival is going to remain relevant in these difficult movie times, it needs to work harder to secure the best, and it needs to nurture a new audience, not just dine out on the faithful. Whether it scales up or retains its modest proportions, it needs to embrace the very exclusivity that makes it occasionally maddening and generally indispensable.

Advertisement
Brava! As a recent NY commenter here at Scanners recently reported, the NYFF is running a trailer for itself saying something like: "Some people accuse us of being selective and having high standards, but that's what our audience expects from us." I'm all for elitism -- as long as it implies having standards. Simply having a small number of slots does not alone make a festival "selective" or "elitist" or "prestigious" or "exclusive." It makes it limited. And that's fine. Telluride (held over Labor Day Weekend) doesn't have all that many slots, either. A festival is defined by what its programmers do to fill the slots that are available. As a film festival programmer myself (from the epic Seattle International Film Festival to the "exclusive" Floating Film Festival), I know how hard it is to program these events, whether you have hundreds of showings or only a few, so I am fully sympathetic. But any festival needs to figure out its identity and its role in the film culture (based, in part at least, on its location and its desired audience). I think Dargis's assessment of NYFF is right on.