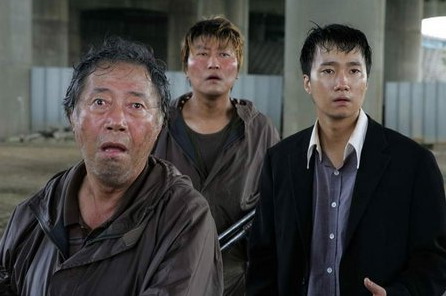 What is the NYFF crowd going to make of "The Host"?

I laughed when I read Caryn James' tired and trivial "All the King's Men" piece in the New York Times the other day -- especially this little nugget of unsupported parochial spin:

Oscar-ready films that have opened in September, like “Mystic River" and “Good Night, and Good Luck," have come out of the prestigious New York Film Festival. “All the King’s Men" went to the nonexclusive Toronto film festival, and the word there was that the movie was mediocre at best.

Advertisement
What are those two statements intended to mean? That films stand a better chance at winning Oscars if they are launched in the "prestigious" New York Film Festival (which shows about 30 features, including revivals -- the vast majority of which have already played Cannes in May, and Telluride and/or Toronto in September) rather than the "nonexclusive" Toronto International Film Festival (which shows ten times as many films)?

As David Poland points out ("Why We Don't Link To Caryn James Much"), that notion is "as wrong as wrong can be." He cites the obvious counter examples of Oscar faves shown at Toronto but not NY: "Crash," "Brokeback Mountain," "Capote," "Sideways," "Ray," "Finding Neverland"... and mentions that Clint Eastwood's "Flags of Our Fathers" also isn't being shown at NYFF. (For that matter, neither is Martin Scorsese's "The Departed," although both films open in October.)

But who even cares whether a film festival screens a movie that's later nominated for an Oscar? That's not what film festivals are about. So, is James suggesting that the more "exclusive" a festival is, the better it is? In that case, surely the Floating Film Festival (which shows twenty-something films and is programmed mostly by film critics, including Roger Ebert, Richard and Mary Corliss and me), and which is held aboard a cruise ship for only 200 or so festivalgoers, is the more "exclusive" fest. (Bruce Kirkland of the Toronto Sun has called it "the world's most exclusive.") Still, Roger Ebert says the two best film festivals in the world -- in terms of influence and quality -- are Cannes and Toronto.

Or maybe James is suggesting that "mediocre at best" pictures are helped by exposure at "prestigious" film festivals, but not at "nonexclusive" ones? (Didn't seem to help "The Da Vinci Code" or "Southland Tales" get better reviews out of Cannes...) Does she think people would think the movie was better if it was in NYFF rather than TIFF? Does she also have a bridge for sale?

But the question I really want to ask is: To whom does the New York Film Festival matter and in what ways? The general public can't get tickets, which are almost exclusively reserved for donors to the Film Society of Lincoln Center. NYFF is social payback -- time to give the old rich folks a little cinematic baksheesh for their generous financial support.

OK, so it doesn't do a helluva lot for the movie lovers of New York. How does it help the films themselves? I asked several prominent specialty distributors recently, and they only thing they all agreed upon was that if you put your movie in the NYFF, and you opened it shortly after the festival screenings (in many cases, that means releasing it the very next day), you could save a lot of money because Lincoln Center would cover practically all your publicity costs (getting the filmmakers in town for interviews, etc.). Basically, the festival pays for the launch of your movie -- and it's damned expensive to open a movie in New York. Plus, you get a good word-of-mouth screening out of it.

Unfortunately, "art films" in New York are unhealthily dependent on a single, make-or-break New York Times review, and (until this year, when the Times revised its policy) films in the NYFF were reviewed only once -- when they played the festival. Naturally, if you got a good review, you'd want to open the movie as soon as possible to capitalize on it. (If the Times review isn't going to be so good, or if it's uncertain, you open the movie on a Sunday. If the review turns out to be positive, you buy ads and reprint it.)

Nobody I talked to spoke of any particular "prestige" associated with being in the NYFF. One person did tell me a story about negotiating for the US rights to a foreign film, and how the producer held out for more money after the film was selected for the NYFF. Problem was, an NYFF slot didn't appreciably increase the value of a film in the American market. (For that matter, neither would any other film festival.) The Times review was not so great. And the movie went without a US distributor.

You may have noticed that this week Robert De Niro and the Tribeca Film Festival gang were making headlines, upstaging the opening of the NYFF with a press conference expressing solidarity with the newly launched festival in Rome, which begins later in October. That festival has been criticized for competing with the Venice festival, just as Tribeca has been criticized for competing with the old guard NY Fest. And, of course, that kind of competition is exactly the point of mounting the new festivals in Rome and Tribeca.

So, I ask YOU -- whether you're a distributor, a filmmaker, a publicist, a critic, a moviegoer: What do you get out of the NYFF? How does it help film in New York, or anywhere else? Or does it? Feel free to post comments anonymously if you have to -- or send me an e-mail and I'll do it for you. I think you see my point of view -- so, enlighten me, change my mind if I'm wrong, or confirm my impressions with your own experiences and observations. I really want to know what this apparent dinosaur has to offer the film world in the 21st century...

P.S. Over at The Hot Blog, Texas-based Variety critic Joe Leydon comments: "At this point in time, when a film plays the New York Film Festival, it does more for the festival than it does for the film. Seriously. Is there a more irrelevant festival in any major North American city? Hasn't Toronto made the event almost comically redundant?"