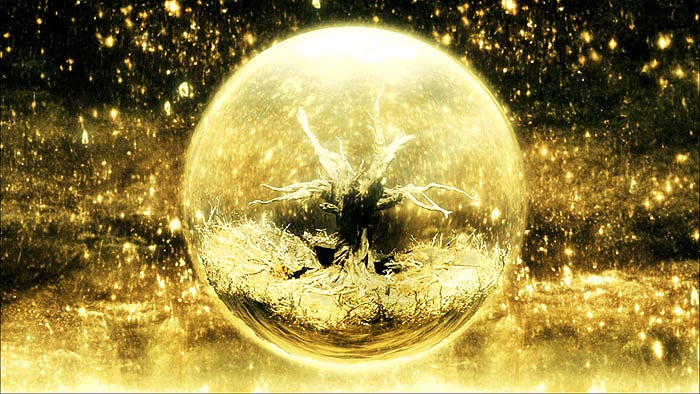 When I reviewed Darren Aronofsky's "The Fountain" last year, after having first seen it at TIFF 2006, I wrote:

"The Fountain" is a science-fiction historical adventure-fantasy about a man's (or Man's) struggle to face the incontrovertible fact of death.

It begins with Tomas (Hugh Jackman, a boy a long way from Oz) as a 16th century Spanish conquistador exploring the land of the Mayans in search of the biblical Tree of Life at the behest of Queen Isabella (Rachel Weisz). The movie slips into the 21st century, where Tommy (Jackman) is a surgeon and research scientist desperate to discover a cure for the tumor in the brain of his wife, Izzi (Weisz), who is writing a fairy-tale book called The Fountain that includes the 16th century story.

Surging forward another few millennia into the 26th century, the film finds Tom (Jackman) as a kind of zen astronaut hurtling through space in a big bubble with a dying tree and the ghost of 21st century Iz (Weisz) on their way into a mysterious nebula. The three stories flow into and out of one another.

Advertisement
I got that bit about the "26th century" from the press kit, not from the movie itself, but I was attempting to be careful in how I described the relationship between the three intertwined "stories" in the film. Yes, they are set in three different time periods, but are they really meant to be chronological stories of the same (or different) characters? Not only do I, as a viewer of the film, not know -- I don't care. Nor should I.

Roger reviewed "The Fountain" last week (he gave it half a star less than I did), and observed -- here be spoilers:

Did I have it figured out? It didn’t take me long, and here was my thinking: Since there is not a single element in the film claiming that the same man is alive in all three time periods, he obviously is not. There is a critical belief that you should not bring story elements to fiction that cannot be found there. The fictional identity of the first man is explained by Izzy’s novel, in which she would obviously visualize her own lover as the hero. The fictional nature of the third man is explained because, hey, people don’t go floating through the cosmos inside a bubble while levitating and eating bark, even in “the future.” There are more things in heaven and earth than are dreamed of in our philosophy, but not that. Stephen Hawking will back me up. The film’s central section is unalloyed realism, and generates the fantasy of the first and third. Since Izzy dies in it, magic isn’t allowed. Fiction sets its rules.

RogerEbert.com reader Matt Withers to write in with his own theory about "The Fountain," which we printed as a guest commentary here:

... I was struck by what an amazing tale it told. A quick Google search later led me to believe that so far no one has given it credit as a story that makes much sense; I found simply a mass of possible interpretations. I actually believe there is a very clear and linear story being told (albeit in a "Pulp Fiction"-y kind of timeline). Since I have not come across any explanation similar to my own, I thought I would share it -- film fan to film fan.

To begin our exploration of just what the hell is going on in "The Fountain," our first task is to determine which, if any, of the three story lines presented is real.

Advertisement
You'll have to read the piece for Withers' interpretation of what's "real" (and not) in the movie -- but Marc Caddell isn't buying it. He writes in with his own interpretation (which you can read at the above link).

Me, I think either of these readings are fine (whatever floats your bubble), but I think they are utterly beside the point. In a movie of this sort, the movie is the experience, and it's reductive to try to say one story is more "real" than another. I wrote an article about this subject on RogerEbert.com a few years ago (about "Fight Club" and "Taxi Driver" and "The Wizard of Oz" and "American Psycho" and "Eyes Wide Shut" and "Citizen Kane" and "The Discreet Charm of the Bourgeoisie"...) called "Head Trips: Movies Inside the Skull":

It’s silly how many moviegoers and critics insist upon making an artificial distinction between what is “real” and what is “unreal” in a movie – often at the expense of what the film itself is actually about. It’s as if, to them, the predominant idea behind any given picture boils down to nothing more than: Did It Really Happen Or Was It All In His/Her Head? Well, look at it this way: If it’s on the screen, it’s there for a reason – to convey something about character, story, theme. And that is all that matters.

A movie consists of nothing more or less than the images in front of you, and what you go through while you watch them. Consider: Does it honestly matter if Dorothy really goes to the Merry Old Land of Oz, or if it was “all a dream” – or, for that matter, if her “trip” was the result of a concussion, or magic Munchkin mushrooms? Of course not. As any child can (and will) tell you, the important thing about Dorothy’s journey to Oz and back is what she experiences along the way, and what she gets out of it, not whether she physically travels anywhere....

Of course, in "The Wizard of Oz" (1939), the distinction between “reality” and “fantasy” is made pretty explicit because, as we all know, Kansas is a monochromatic state (of mind) and Oz is a horse of a different Technicolor. (I’m not so sure I picked up on that, though, the first time I saw the movie as a small child – watching it on black-and-white broadcast TV.)

It's always the theme, and the imagery, that matters to me in a movie, not so much the Point A to Point B trajectory of the plot. I guess if I were to describe "The Fountain" in story terms, I'd use not just the image of the tree, but maybe the one of the bubble: The movie is the bubble. Whatever you experience is inside the bubble, and that's all that matters. Whatever's outside the bubble is, as Roger writes, only speculative because it's not actually in the film.

Want to dip your toe in this argument? Or float your own theory about the structure of "The Fountain"? Dive in....