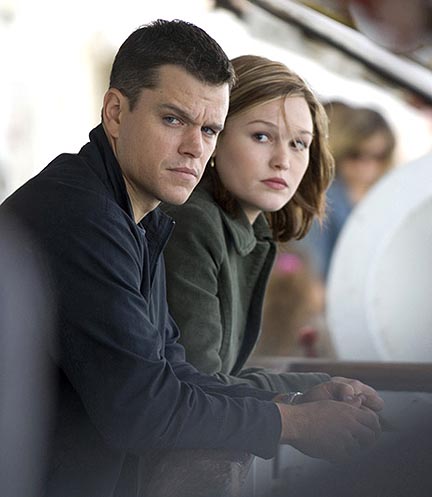 Matt Damon and Julia Stiles scope out the situation in "The Bourne Ultimatum."

Kathleen Murphy and Richard T. Jameson present their much-anticipated annual list of indelible memories-at-24-fps, Moments Out of Time, at MSN Movies. They've been sifting through the fragments of movie-time for these shining moments for many years, beginning in Movietone News and continuing through the 1990s in Film Comment.

Beginning when I was in high school, I would read through them religiously, looking for moments I'd treasured, too -- or maybe even ones I hadn't spotted or properly appreciated. Then I'd re-read, again and again, as if I were holding gems to the light and examining them through a magnifying glass, for the sheer pleasure of how they caught the rays. I'd pore over every turn of phrase, teasing out the meanings, even for the movies I hadn't seen with my own eyes (yet).

In "Ratatouille," the remembrance of things past courtesy of the eponymous dish: the critic's flashback to childhood

When Bourne (Matt Damon) wonders why the CIA operative (Julia Stiles) who once set him up is helping him now, she answers with what passes for a declaration of love in the killing environs of "The Bourne Ultimatum": "You were ... hard for me." ...

In "The Assassination of Jesse James by the Coward Robert Ford," the pebbles sliding away from the vibrating rail as Jesse's boot rests there, waiting to stop his last train

Leaving her friend to wait out her abortion, Otilia (Anamaria Marinca) attends an obligatory birthday party in "4 Months, 3 Weeks and 2 Days." The camera holds and holds as she sits frozen, claustrophobically hemmed by babbling guests, until she and we nearly explode with tension

The first getting-to-know-you-and-your-music duet in "Once," one of the purest distillations of rapport ever

In "Starting Out in the Evening," confronted by a redheaded beauty (Lauren Ambrose), the elderly gentleman (Frank Langella) involuntarily covers his face with his hand -- to hide his age or to shield his eyes from her bright heat

Night birds: Chigurh, the raven, and the gunshot reverberating off the otherwise deserted bridge, after which the two bend their separate ways in "No Country for Old Men" ...

"There Will Be Blood": Killing God in a two-lane bowling alley: "I'm finished."...

Hungry for more? Devour all of 'em here.

Next Article: Once (revised and sexed-up) Previous Article: Why the Helvetica is Trajan the movie font?

Once (revised and sexed-up)

Why the Helvetica is Trajan the movie font?