Melancholia: This is The End

"Melancholia" is now available On Demand; in theaters November 7.

Of the Four Bodily Humours -- sanguine (blood), choleric (yellow bile), melancholic (black bile) and phlegmatic (phlegm) -- Lars Von Trier has probably been most closely associated with the choleric, as expressed in angry, violent, inflammatory, irritating and caustic films such as "Breaking the Waves," "The Idiots," "Dancer In The Dark," "Dogville," "Manderlay," "Antichrist"... The latter felt to me like a glossy fashion magazine's idea of a horror movie ("Evil Vogue" -- all it was missing were the scratch-n-sniff Odorama perfume ads), but von Trier¹ claimed it grew from deep inside a cocoon of depression.

"Melancholia" strikes me as a more focused and harrowing portrait of clinical depression, a glowing, black-bile-on-velvet portrait of despair so bleak that it destroys the entire planet. Two planets, in fact: one is Earth and the other (quite similar looking but much, much larger) called Melancholia, a kind of massive-planet-sized anti-matter particle which we see collide with and engulf the Earth (from deep in space) in the opening montage... and again, from a terrestrial perspective, at the end.

If Terrence Malick's "Tree of Life" is, as I described it earlier in the year, "a movie about (and by) a guy who wants to create the universe around his own existence in an attempt to locate and/or stake out his place within it," then "Melancholia," by my reckoning, is a movie about (and by) a person whose depression is so inescapably great and soul-destroying that it envelops and annihilates the world. Because it has to. There's nowhere else for it to go. Also, it's important for the depressed character/filmmaker to firmly assert that the only life in the universe is on Earth, and that all of it is annihilated. Hope of any kind is not an option. Besides, anything less that than the obliteration of absolutely everything would spoil the perfection of the happy ending for von Trier and Justine (Kirsten Dunst), his Bride of Oblivion. 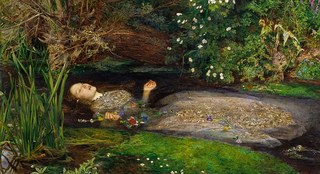 "Melancholia" begins with an overture/montage (the orchestral prelude to Wagner's "Tristan und Isolde") that von Trier himself describes, unimprovably, as a headlong dive into the abyss of German Romanticism: a series of exquisite, haunting ultra-slow-motion tableaux -- some of which are directly referenced in the film proper (the bride enmeshed in a sticky grey organic web; Justine coming through the woods while her nephew whittles a stick in the foreground; the manicured "Last Year at Marienbad" grounds of the manor in which the movie is set) and some of which are more indirect (Justine's horse Abraham collapsing in a field under the aurora borealis; Justine as the mad, suicidal Ophelia, who drowned in Denmark; Justine conducting electricity through her fingertips). There's something almost Lynchian about these images. They don't feel to me like they've been intellectualized (as von Trier's imagery often is); more like Lynch's, they have an immediacy, as though they've leapt straight from the artist's unconscious onto the screen.

Hand-held shaky-cam work aside, the aesthetic is about as far from Dogme95 as you can imagine -- so pristine and self-consciously beautiful that von Trier (as usual) has already felt the need to half-apologize for it in an interview on the movie's official site: "Well, I am afraid it has turned out too 'nice." [...]

"All the time I meant it to be polished in some way. And I hope people will find something beyond the polish, if they really look for it. It's just harder to get down to than with 'Antichrist,' because the surface is so polished."

"Melancholia" is spectacularly polished, evocative of the elaborately artificial movie-worlds of the director's "The Element of Crime" (1984) and "Europa/Zentropa" (1991). There's no aesthetic "vow of chastity" behind these lush, Romanticized 2.35:1 land-, space- and face-scapes. The opening screens are reminiscent of the Classic Rock chapter dividers in "Breaking the Waves." You may not even notice at first that they are moving. I think of them as panels in altarpiece paintings or sectional works like Hieronymus Bosch's "Garden of Earthly Delights," depicting separate but abutted/overlapping visions of heaven and hell here on Earth. 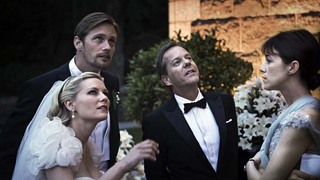 After this overture/prelude montage, the movie, like most of the elements in it, is divided in two. The first part, "Justine," is a torturously prolonged chronicle of an endless wedding reception as experienced by the clinically despondent bride; the second traces the slow journey from denial to awareness of Justine's sister Claire (Charlotte Gainsbourg). The doubling/splitting/mirroring of the planets, the sisters and the film's structure continues with the characters: Michael (Alexander Skarsgård), Justine's shy, gentle, lovestruck groom and Claire's wealthy, impatient, assertive husband John (Kiefer Sutherland); the sisters' divorced parents, the irresponsible, (desperately?) fun-loving and possibly alcoholic Dexter (John Hurt) and the brittle, bitter Gaby (Charlotte Rampling, whose rictus-visage has made her modern movies' scariest thing on two legs); the two Bettys seated on either side of Dexter at the reception; Justine's longtime advertising agency boss Jack (Stellan Skarsgård) and his nephew, the inexperienced newcomer Tim (Brady Corbet) he assigns to shadow his star employee all night until she comes up with a campaign tagline he expects from her... It's matter vs. anti-matter, all the way through. 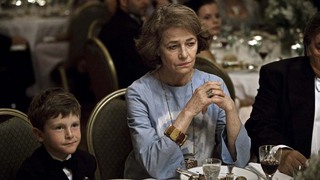 The movie proper begins with a comedic exercise in frustration that hangs over the rest of the film: a loooong white limousine, carrying Justine in her wedding dress and Michael in his tux, attempts to negotiate a winding driveway lined with old stone markers, and can't quite make one of the turns. By the time they arrive for their own reception dinner they are two hours late, making the ceremonies seem all the more interminable. Poor Michael has invested his heart and future in Justine, but all she wants to do is shut down and take a nap as the procession of hollow, mandatory wedding rituals drag on and on and on: the meal (remember to pass from the left), the awkward toasts, the dance, the cutting of the cake.... If there's anything more hellishly tiresome than a wedding, it's one that doesn't even delight the bride. By the end of the evening (near the end of the middle of the eternal night), the marriage of Justine and Michael is stillborn... abandoned and forgotten, just another a path not taken. Her last words to him are, "What did you expect?" Justine has moved past clinging to any expectations, beyond desire, beyond hope.

In the depths of her despair, Justine finds a certainty that keeps her calm in the face of universal annihilation -- which is merely an external manifestation of what she feels inside, anyway. She welcomes the apocalypse, a suicide without guilt because nobody is left behind. "Melancholia" effectively submerges the viewer in Justine's near-catatonic emotional state (that's one of its most powerful achievements), yet the movie itself is not a depressing experience. There's (evidently hard-won) humor behind almost everything -- including those utterances from Justine, above. That final absurd sentence hit me as particularly funny, and insightful into the way the depressed mind works, an endless spiral of contradictions: We're all alone, life is evil, and nobody will miss it. Well, yes, if all life is extinguished, Justine, you can be fairly certain there will be nobody around to miss it. (I think this is the ultimate form of the old joke about the food being terrible -- and such small portions!)

I will venture to say this: There are few movies in which someone (like me) who has suffered from clinical depression recognizes the authentic sensibility of depression (it takes one to know one): "Persona," Cronenberg's "Crash," "Fight Club" ... and certainly "Melancholia." Charlotte Gainsbourg and Willem Dafoe had some pretty deep depression scenes in "Antichrist," but once they got into the woods the movie turned into a freakshow and the real horror was lost. By showing where "Melancholia" is going at the very start, and then following through, von Trier captures the futility of true depression, when your only conviction is that everyone is utterly alone, life is evil, existence is and has always been meaningless, and you need to make it all end soon, if only you had the energy to stand up.

That probably doesn't sound very enjoyable, does it? Well, I can't think of (m)any von Trier comedies (they're all comedies, aren't they?) that I would watch again for pleasure (I haven't seen "Manderlay" or "The Boss of It All") -- but "Melancholia" is, if not exactly exhilarating, some kind of ecstatic experience, like witnessing the celestial apparition of Melancholia itself. This movie has the courage of its maker's and central character's convictions, both nihilistic and visionary. Watching it, I felt a sense of awe: Surely no revelation is at hand.

¹ I know, it should just be "Trier." The "von" is an aristocratic joke, a nickname he supposedly picked up in film school and that he kept in honor of two other phony "von" filmmakers: Erich von Stroheim and Josef von Sternberg. But while it's commonplace to refer to "Stroheim" and "Sternberg" (maybe because those names already have two syllables), people in the U.S. seem to prefer "von Trier." 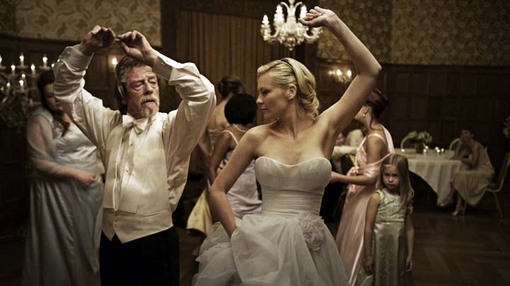