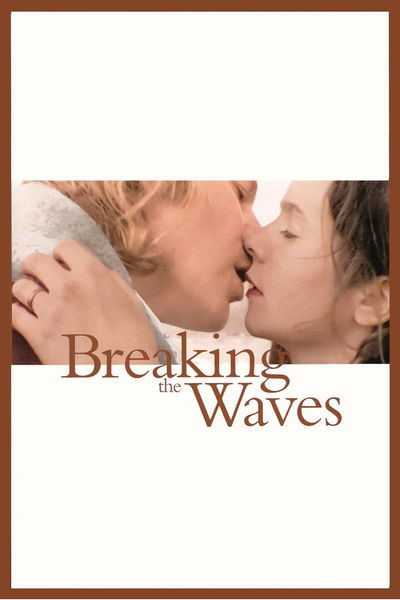 “Breaking the Waves” is emotionally and spiritually challenging, hammering at conventional morality with the belief that God not only sees all, but understands a great deal more than we give Him credit for. It tells the story of Bess, a simple woman of childlike naivete, who sacrifices herself to sexual brutality to save the life of the man she loves. Is she a sinner? The grim bearded elders of her church think so. But Bess is the kind of person Jesus was thinking of, I believe, when he suffered the little children to come unto him.

The movie takes place in the 1970s, in a remote northern Scottish village. Bess (Emily Watson), a sweet-faced and trusting girl, is “not quite right in the head,” and her close-knit community is not pleased by her decision to marry Jan (Stellan Skarsgard), who works on one of the big oil rigs in the North Sea. But she loves Jan too much that when the helicopter bringing him to the wedding is delayed, she hits him in a fury. He is a tall, gentle man with a warm smile, and lets her flail away before embracing her in his big arms.

She is a virgin, but so eager to learn the secrets of marriage that she accosts her new husband in the powder room at the reception after the ceremony, telling him eagerly, “You can love me now!” And then, “What do I do?” The miracle of sexual expression transforms her, and she is grateful to God for having given her Jan and his love and his body.

Meanwhile, downstairs at the ceremony, Jan's shipmate and Bess' grandfather scowl at one another; the shipmate crushes a beer can, and the grandfather picks up a lemonade glass and breaks it in his bloody hand.

We learn a little about Bess, who had a breakdown when her brother died. Her closest friend is her sister-in-law, Dodo (Katrin Cartlidge), a nurse who stays in the remote district mostly because of her. Bess belongs to a strict sect where women do not speak in church, and the sermon over the body at a funeral might be, “You are a sinner and will find your place in hell.” Bess' grandfather observes sourly, “We have no bells in our church.” Jan is critically injured in an accident on the rig. He is paralyzed from the neck down, and the local doctor tells Bess he may never walk again. “You don't know Jan!” she says fiercely. One day Jan asks her to find a man and make love to him, “for my sake. And then tell me about it.” Bess does not like this idea, but she does what Jan asks. Dodo is enraged: “Are you sleeping with other men to feed his sick fantasies? His head's full of scars--he's up to his eyeballs in drugs.” It is indeed never made quite clear why Jan, a good man, has made this request of the woman he loves. That is not the point. The point is that Bess, with her fierce faith, believes that somehow her sacrifice can redeem her husband and even cure him. As his condition grows worse, her behavior grows more desperate; she has herself taken out to a big ship where even the port prostitutes refuse to go, because of the way they have been treated there.

The film contains many surprising revelations, including a cosmic one at the end, which I will leave you to discover for yourself. It has the kind of raw power, the kind of unshielded regard for the force of good and evil in the world that we want to shy away from. It is easier sometimes to wrap ourselves in sentiment and pious platitudes, and forget that God created nature “bloody in tooth and nail.” Bess does not have our ability to rationalize and evade, and fearlessly offers herself to God as she understands him.

This performance by Emily Watson reminds me of what Truffaut said about James Dean, that as an actor he was more like an animal than a man, proceeding according to instinct instead of thought and calculation. It is not a grim performance and is often touched by humor and delight, which makes it all the more touching, as when Bess talks out loud in two-way conversations with God, speaking both voices--making God a stern adult and herself a trusting child. Her church banishes her, and little boys in the village throw stones at her, but she tells Dodo, “God gives everyone something to be good at. I've always been stupid, but I'm good at this.” “Breaking the Waves” was written and directed by Lars von Trier, from Denmark, who makes us wonder what kinds of operas Nietzsche might have written. He finds the straight pure line through the heart of a story, and is not concerned with what cannot be known: This movie does not explain Jan's cruel request of his wife, because Bess does not question it. It shows people who care about her, such as the sister-in-law and the local doctor, and others who do not: religious bean-counters like the bearded church elders. They understand nothing about their Christianity except for unyielding rules they have memorized, which means they do not understand Christianity at all. They talk to God as if they expect him to listen, and learn. At the end of the film they get their response in a great savage ironic peal.

Not many movies like this get made, because not many filmmakers are so bold, angry and defiant. Like many truly spiritual films, it will offend the Pharisees. Here we have a story that forces us to take sides, to ask what really is right and wrong in a universe that seems harsh and indifferent. Is religious belief only a consolation for our inescapable destination in the grave? Or can faith give the power to triumph over death and evil? Bess knows.

The House That Lars von Trier Built, and That I Live In