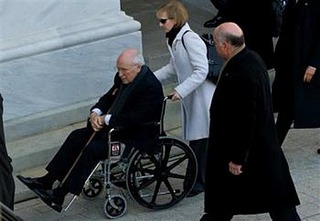 Tom Brokaw, NBC News: "It's unfortunate for Vice President Cheney to have had this accident obviously, because there will be those who don't like him, who will be writing tomorrow that he had a Dr. Strangelove appearance as he appeared today in his wheelchair."

Brokaw brought it up. Judge for yourself. Did it occur to Brokaw that that this could have been a wily piece of black-hearted/suited satirical stagecraft on Cheney's part? Wonder what was in those boxes that he was reportedly moving -- himself -- when he injured his back. Shreddable secret documents, perhaps? Or could the former CEO of Halliburton not afford to hire movers?

UPDATE: Reports that the ex-VP was doing a little recreational waterboarding down by the Potomac when he slipped on the ice have not been confirmed.