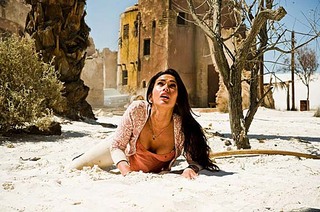 Megan Fox, one of the leads in "Transformers" has criticized your films for being special-effects-driven and not offering so many acting opportunities. Do you agree?

Well, that's Megan Fox for you. She says some very ridiculous things because she's 23 years old and she still has a lot of growing to do. You roll your eyes when you see statements like that and think, "Okay Megan, you can do whatever you want. I got it." But I 100% disagree with her. Nick Cage wasn't a big actor when I cast him, nor was Ben Affleck before I put him in "Armageddon." Shia LaBeouf wasn't a big movie star before he did "Transformers" -- and then he exploded. Not to mention Will Smith and Martin Lawrence, from "Bad Boys." Nobody in the world knew about Megan Fox until I found her and put her in "Transformers." I like to think that I've had some luck in building actors' careers with my films.

So there! But what did Fox actually say about being in "Transformers"? Here are some excerpts from her cover interview in Entertainment Weekly:

ENTERTAINMENT WEEKLY: Transformers turned you into an overnight star. Looking back, how do you feel about the movie?

MEGAN FOX: I'm terrible in it. It's my first real movie and it's not honest and not realistic. The movie wasn't bad, I just wasn't proud about what I did.

What percentage of your range have people seen so far?

Seven percent. On the new one, I tried. But unless you're a seasoned veteran, working with Michael Bay is not about an acting experience. [...]

You're a bigger star now than when you did the first Transformers. Did they beef up your role in the sequel?

The humans are still secondary to the robots because it's a movie about robots. I feel like the part is adequate. I feel like we do something that's watchable on our end and then ILM makes it phenomenal.

You don't sound convinced that this is the greatest movie on earth.

You up for a third Transformers?

Sure. I mean, I can't s--- on this movie because it did give me a career and open all these doors for me. But I don't want to blow smoke up people's ass. People are well aware that this is not a movie about acting. And once you realize that, it becomes almost fun because you can be in the moment and go, ''All right, I know that when he calls Action! I'm either going to be running or screaming, or both.''

Are you happy with the kinds of roles you're getting offered now?

I get offered some outrageous s---, like "Bikini Summer Camp Island," or whatever.

Do you think you're a good actress?

I think I could be. If I really buckle down, I think one day I could be a very good actress. But so far, I haven't done anything yet.

So, Fox is saying she hasn't yet had a chance to show off her acting chops in Michael Bay movies, and Bay's response is to claim that she makes ridiculous remarks because she has a lot of growing to do -- and that, as proof, he has made box office stars out of other actors, including Nicolas Cage who won an Oscar for Best Actor ("Leaving Las Vegas") the year before Bay cast him in his first blockbuster, "The Rock." In the previous 15 years, Cage's career had only included several films by Francis Ford Coppola ("Rumble Fish," "The Cotton Club," "Peggy Sue Got Married"), the Coens ("Raising Arizona"), Norman Jewison ("Moonstruck"), David Lynch ("Wild at Heart") -- stuff like that. (But wasn't it Simon West who really propelled Cage to mega-stardom in "Con Air" the next year, when he also co-starred with John Travolta in John Woo's "Face/Off"?)

I guess I missed the part where Fox said Bay's movies weren't popular -- to which Bay could respond by saying his prestigious productions provided showcases for actors to do some of their greatest work in memorable roles.

My favorite part of the Fox interview is this, about a brief appearance in an earlier Bay film: "I was actually an extra on "Bad Boys II" [in 2003]. There's a club scene, and I was one of the club kids. I was in a stars-and-stripes bikini and a cowboy hat, dancing under a waterfall.... I was still in ninth grade. I liked it at the time, because I was getting out of school. So I was like, F--- yeah, I don't care! And I got paid extra because if you allow them to put water on you, you get paid extra. I got probably $600."

And it wouldn't be the last time Bay put water on her. Turns out she auditioned for "Transformers" by washing Bay's Ferrari while he shot video of her. Who says she hasn't have an opportunity to stretch under Bay's direction?