Mike Figgis' "Leaving Las Vegas" (1995) is not a love story, although it feels like one, but a story about two desperate people using love as a form of prayer and a last resort against their pain. It is also a sad, trembling portrait of the final stages of alcoholism. Those who found it too extreme were simply lucky enough never to have arrived there themselves.

Few films are more despairing and yet, curiously, so hopeful as this one, which argues that even at the very end of the road, at the final extremity, we can find some solace in the offer and acceptance of love. The movie tells the story of Ben and Sera, played by Nicolas Cage and Elisabeth Shue. He is a Hollywood agent, she is a prostitute. Although prostitutes can be a cliché in the movies, and those with a good heart even more so, the details of their relationship leave clichés far behind, and the movie becomes the story of these specific characters and exactly who they are. There is also the truth that a man in Ben's condition would be unable to begin any relationship without paying for it.

Ben is in the final stages of an alcoholic meltdown. We watch as he asks a friend in a bar for a loan and is told bluntly: "Don't drink it in here." We sense his loneliness and need in his attempt to pick up a woman in a bar: "I really wish you'd come home with me. You smell great and you look great." We see him being fired from his job, and agreeing that he should be fired, and telling his boss the severance check is too generous. Then he burns all of his possessions, and there is a curling photograph in the fire, which seems to come from a failed marriage. He moves to Las Vegas with the intention of using his severance to drink himself to death.

Cage's performance in these early scenes is an acutely observed record of a man coming to pieces. He shows Ben imploding, rigid in his attempt to maintain control, to smile when he does not feel a smile, to make banter when he wants to scream. Heneedsa drink. During the movie, Cage will take Ben into the regions of hell. There will be times when he has the DTs, times when he must pour booze into his throat like an antidote to death, times of nausea, blackouts, cuts and bruises. There is a scene in a bank when his hands shake so badly he cannot sign a check, and we empathize with the way he tries to function, telling the bank teller whatever he can think of ("I've had brain surgery"). Yes, sometimes, he feels better, and sometimes we can sense the charm he must have had (we sense his boss' affection for him even as he's being fired). But for Ben these moments are not about pleasure but about the temporary release from pain.

Sera is seen in three ways: As Ben sees her, as her pimp and her clients see her, and as she sees herself in close-up monologues during therapy sessions. Her pimp (Julian Sands) is soon off the scene; it is bold of Figgis to establish him, to show his sadomasochistic control of Sera, and then to make him disappear in an off-screen killing. We need to know where Sera is coming from, but we don't need to linger there.

For Ben, who almost runs her down in a crosswalk, she is literally the last person in his life he will be able to focus on. He loves her with the purity of a love that has no components, except need and gratitude. He doesn't want to have sex with her, doesn't want her for companionship, isn't looking for an "experience." He is simply touched, somewhere inside his suffering where nothing else can reach, that this woman would care for him.

Why does Sera love Ben? The movie leaves that for us to intuit, and the therapy sessions do not explain her feelings, they only show her trying to discover them. There is an early monologue where she boasts about her skill as a hooker, how she can sense exactly what a client wants and provide it. That is how she wants to see herself. We also see that her pimp cuts her ("never on the face"), and we witness a night when she goes into a motel room with four drunken high-school athletes, and this is so unwise that we read it as deliberately self-destructive. Sera still has her looks, but she once had innocence and hope, and they are gone. When she looks at Ben, she feels sympathy and empathy, but more than that, I think she feels admiration for the purity of his gesture: Having arrived at the end of his road, he accepts his destiny with a certain stoic courage.

Of course, he could be saved. Alcoholics Anonymous meetings are filled with healthy, functioning people who were once living Ben's life. But most drunks are not lucky enough to find sobriety. And in Ben's case, there may be another component; he is actively committing suicide. "Is drinking a way of killing yourself?" Sera asks him, and he replies: "Or, is killing myself a way of drinking?"

Sera senses she cannot save him. "You can never, ever, ask me to stop drinking," he tells her soon after they meet. "Do you understand?" She says: "I do. I really do." As a hooker in Vegas she has met a lot of sad and desperate men and no doubt a lot of drunks, but there is something about Ben, she tells her therapist, that she can't get out of her mind. Oddly enough, we sense it, too. There are not many terminal drunks we would want to spend a movie with, but we feel tender toward Ben. Of other famous movie alcoholics, Ray Milland's in "The Lost Weekend" was a case study, seen from outside, and Albert Finney's in "Under the Volcano" lacked Ben's self-knowledge.

The movie was made quickly, inexpensively, close to ground level. Mike Figgis is a British director whose career is a litany of risk-taking and original concepts; his boldest experiment was "Timecode" (2000), filmed on video in four unbroken 90 minute shots which were simultaneously seen on a screen divided into quadrants. He shot "Leaving Las Vegas" on location, without permits or permissions, using an unobtrusive 16mm camera and sometimes sending his actors into real situations. The cinematography, by Declan Quinn, creates a high-contrast noir look, the shadows sometimes invaded by garish neon. The music reinforces it. Figgis wrote the original score, and also uses the kinds of songs ("Angel Eyes," "Come Rain or Come Shine") drunks punch into the jukebox at 3 a.m. He repeats some of the songs, which is right: A drinking session can develop its own theme song.

The film was nominated for best actor, actress, director and screenplay. Cage won, and deserved to. Shue did not win (Susan Sarandon did, for "Dead Man Walking"). It is impossible to imagine one performance without the other, and Shue is the emotional center of the film, because the Cage character is on a set trajectory and beyond the possibility of change. Shue before and since has been in mostly mainstream commercial movies; like Halle Berry with "Monster's Ball" and Charlize Theron with "Monster," she found a role that took her absolutely to the limit and went all the way, fearlessly.

The screenplay is by Figgis, based on a novel by John O'Brien, who killed himself at about the time the film went into production. He was 34. His father said the book was his suicide note. The character of Ben is certainly a man who has made his decision and will stay with it; why he kills himself with alcohol, instead of, say, shooting himself in the head as O'Brien did, may have two answers. The first, more pragmatic, is that it allows a story arc to develop, as Sera follows Ben on his final lonely journey. The second, which I feel when I watch the film, is that Ben's guilt, or despair, or self-loathing, is so great that he doesn't want a quick end. He wants to suffer all the way out.

That Sera brings him some comfort does not lessen his pain, and if he truly loved her he would not want to leave her. But perhaps he is too deranged to have such thoughts. "You are my angel," he tells her, not long before the unbearably sad and tender death scene. By then he is much more dead than alive.
Nicolas Cage also stars in "Moonstruck," another title in the Great Movies collection at www.suntimes.com/ebert/greatmovies/ 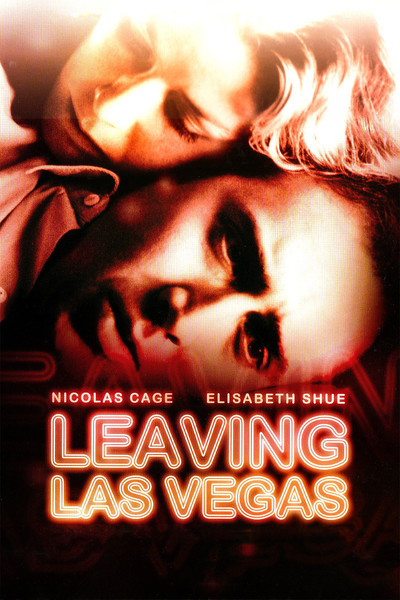