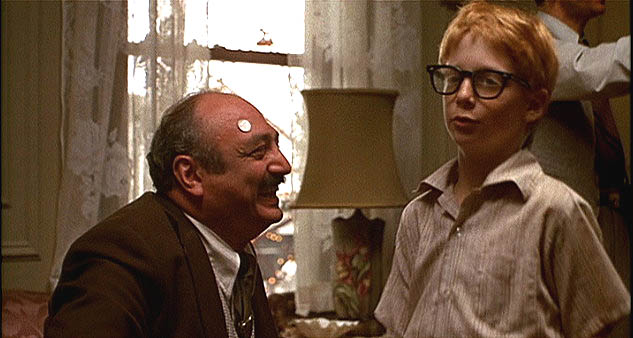 I don't read Slate much anymore since David Edelstein, a real film critic, departed for New York Magazine, and the once-sentient Christopher Hitchens ceased being capable of writing about anything but his own old opinions, circa 2002 and 2003. (Unlike Billy Pilgrim, Hitchens has become stuck in time -- and inside his own head, and nothing beyond what he has previously stated or believed can be processed, mainly because he doesn't seem to think it possible that anything else, like reality, could possibly matter.) A reader reminds me again of why I'm less inclined to visit Slate these days, sending me (with a warning) an inexcusably stupid essay by Stephen Metcalf, of the site's aptly named "dilettante" column, about a classic John Ford Western, called The Worst Best Movie: Why on earth did 'The Searchers' get canonized?"

A better question might be: "Why on earth did Stephen Metcalf think he was capable of writing anything worth reading about 'The Searchers'?" Here's how Metcalf begins:

"The Searchers," John Ford's epic 1956 Western, is a film geek's paradise: It is preposterous in its plotting, spasmodic in its pacing, unfunny in its hijinks, bipolar in its politics, alternately sodden and convulsive in its acting, not to mention boring. Impossible to enjoy, and yet not as obviously medicinal as, say, "The Spirit of the Beehive," "The Searchers" segregates the initiated from the uninitiated; and so it is widely considered, by the initiated, at least, to be among the four or five best movies of all time. At his maiden screening, a young Cahiers du Cinema critic named Jean-Luc Godard wept, later adding, "How can I hate John Wayne … and yet love him tenderly … in the last reel of 'The Searchers'?" Martin Scorsese and Paul Schrader routinely name "The Searchers" as one of their favorite films...

Yes indeed, those qualities Metcalf describes sure do make the movie sound like a "film geek's paradise," don't they? I mean, where is the film geek who does not just crrraaave the spasmodic, the unfunny, the sodden and the boring? Surely, those attributes constitute the very essence of what we -- and Godard and Scorsese and Schrader and countless other crix 'n' geeks -- value in "The Searchers."

By this point in Metcalf's embarrassingly self-revealing scalping (three giveaway words that neutralize the stance of anyone pretending to offer critical insight: "impossible to enjoy"), I found myself thinking not so much of John Wayne or John Ford or Jean-Luc Godard, but of Joey Nichols, the boorish friend of Alvy Singer's father in "Annie Hall," who thought he was so clever to stick nickels on his forehead and his cufflinks as a gimmick to help people remember his name. And my response to Metcalf suddenly formed itself in the words of young Alvy: "What an asshole."

And what a dilettante. Is it worth responding to an ad hominem attack on a movie by someone who has no idea what he's looking at? Probably not. But earlier today I got a (quite good) Opening Shots submission from someone who began by writing: "Originally I wanted to propose an older film to impress the crowd that demands such esotericness from cinephiles..."

Since when are "old movies" -- especially all those Hollywood pictures that millions went to see each week -- considered "esoteric"? What is the difference between an "old movie" and a "new movie" when they both unspool in the immediate present, at 24 frames per second, the way they always have and always will? A movie is always happening right now as you watch it (a film prof of mine used to call this the "eternal present tense"). There's nothing "esoteric" (or, as Metcalf would have it, "medicinal") about it -- unless, of course, you're simply determined to make it so with a blinkered hankering for the new, or a knee-jerk anti-intellectualism (very trendy now) that insists anything valued by smart or talented or passionate people must be beneath one's dignity to appreciate or enjoy.

More on "The Searchers" (and Metcalf's mindless potshots) later. But as for Stephen Metcalf's critical aptitude, here's another apt phrase: Damn him and the horse (or ass) he rode in on. May he (continue to) wander forever between the winds...

(Thanks to Casey Tourangeau... I think.)