Camille Paglia is known for being both brilliant and wacky (possibly wacko) -- often at the same time, which is probably when she's at her most inspired. A founding contributor at Salon.com (and co-star of "It's Pat: The Movie"), Paglia spoke on the phone to Salon editor Kerry Lauerman yesterday after the news of Elizabeth Taylor's death, and offered up an extraordinary tribute. I just wanted to share some of it with you. Lauerman begins by quoting something Paglia wrote about Taylor in Penthouse in 1992:

"She wields the sexual power that feminism cannot explain and has tried to destroy. Through stars like Taylor, we sense the world-disordering impact of legendary women like Delilah, Salome, and Helen of Troy. Feminism has tried to dismiss the femme fatale as a misogynist libel, a hoary cliche. But the femme fatale expresses women's ancient and eternal control of the sexual realm." Paglia takes it from there:

Exactly. At that time, you have to realize, Elizabeth Taylor was still being underestimated as an actress. No one took her seriously -- she would even make jokes about it in public. And when I wrote that piece, Meryl Streep was constantly being touted as the greatest actress who ever lived. I was in total revolt against that and launched this protest because I think that Elizabeth Taylor is actually a greater actress than Meryl Streep, despite Streep's command of a certain kind of technical skill. [...]

To me, Elizabeth Taylor's importance as an actress was that she represented a kind of womanliness that is now completely impossible to find on the U.S. or U.K. screen. It was rooted in hormonal reality -- the vitality of nature. She was single-handedly a living rebuke to postmodernism and post-structuralism, which maintain that gender is merely a social construct. Let me give you an example. Lisa Cholodenko's "The Kids Are All Right" is a truly wonderful film, but Julianne Moore and Annette Bening -- who is fabulous in it and should have won the Oscar for her portrayal of a prototypical contemporary American career woman -- were painfully scrawny to look at on the screen. This is the standard starvation look that is now projected by Hollywood women stars -- a skeletal, Pilates-honed, anorexic silhouette, which has nothing to do with females as most of the world understands them. There's something almost android about the depictions of women currently being projected by Hollywood. [...]

Elizabeth Taylor has been a colossal pagan goddess to me since I was 11 or 12. I was so lucky to have seen her at her height. And my sensibility as a culture critic and as a feminist was deeply formed by her. In the U.S. in the 1950s, blondes were the ultimate Aryan ideal. Perky blondes like Doris Day, Debbie Reynolds and Sandra Dee ruled the roost! And then there was Elizabeth Taylor with that gorgeous, brunette, ethnic look. She looked Jewish, Italian, Spanish, even Moorish! She was truly transcultural -- it was a radical resistance to the dominance of the blond sorority queens and cheerleaders. And then her open sexuality in that puritanical period! It was so daring. She picked up one man after another. [...] 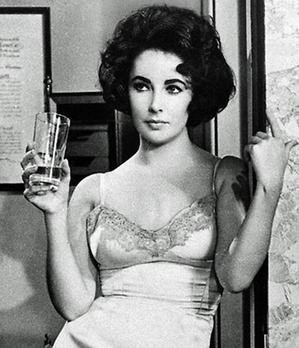 "Butterfield 8" was my Bible. She didn't want to make that film. She hated it her whole life. But "Butterfield 8" meant everything to me as an adolescent. It formed so many of my ideas about the pagan tradition descending to us from Babylon and surviving the Christian onslaught of the Middle Ages. The first time you see her in the film, in that tight, white, sewed-on slip, it's so amazing. Her dress is ripped on the floor, she brushes her teeth with scotch, and she goes up to the mirror and angrily writes "No sale!" on it in lipstick! To me she represented the ultimate power of the sexual woman.

There was a long feminist attack on the Hollywood sex symbol as a sex object, a commodified thing, passive to the male gaze, and it's such a crock! "Butterfield 8" really shows it. There's that incredible moment in the bar where she's wearing a svelte black dress and she and Laurence Harvey are fighting. He grabs her by the arm, and she grinds her stiletto heel into his elegant shoe. It's male vs. female -- a ferocious equal match. He's strong, but she's strong too! That scene shows the power and intensity of heterosexuality, with all its tensions and conflicts. It also shows how terrible current Hollywood filmmaking is -- how false and manufactured sex has become. There's no real eroticism anymore. "Butterfield 8" sizzles with eroticism, because of the psychological distance and animal attraction between male and female. The businessmen in that film are all in their uniforms, their black suits. They're like a horde of identical and characterless myrmidons or clones. They have wealth, they have power, but they're nothing compared to her! The film truly captures the complexities and struggles of sexuality -- all of which have been lost in our period of easy gender-bending. Everything's become so bland and boring now.

There's much, much more here.

Paglia says Taylor's acting reputation was resurrected by Turner Classic Movies, which exposed new generations to her films, detached all the off-screen publicity -- scandals, illnesses, tragedies and melodramas -- that accompanied them the first time around. And she traces a connection from the strength and voluptuousness of Ava Gardner to Taylor, noting that these "tough broads" had a robustness "compared to the vulnerability and emotional train wrecks that were Marilyn Monroe and Rita Hayworth." 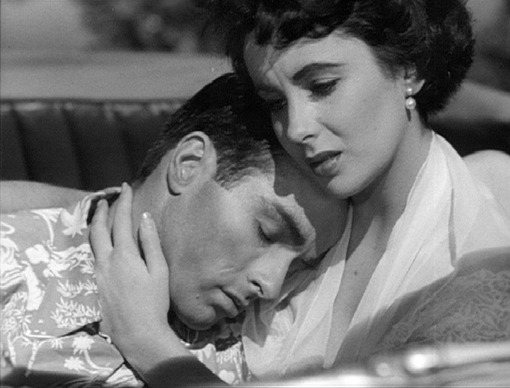 I don't remember "Butterfield 8." It doesn't have a very good reputation -- people said Taylor won her first Oscar for almost dying of pneumonia in Paris the year before, and that she should have won for playing Maggie the Cat in "Cat on a Hot Tin Roof" two years earlier. "Giant" (George Stevens, 1956) and "Cleopatra" (Joseph L. Mankiewicz, 1963) were superstar mega-spectaculars -- the former with James Dean and Rock Hudson, the latter with her fifth and sixth husband, Richard Burton. (She tended to form friendships with with sensitive young men like Roddy McDowall, her childhood co-star in 1943's "Lassie Come Home," Dean, Montgomery Clift and Michael Jackson; and to marry -- or enter into sometimes tempestuous romantic entanglements -- with overtly masculine types like Conrad Hilton Jr., Mike Todd, Eddie Fisher, Burton and John Warner.)

But if you want to see what the Taylor legend is really about, some of my favorites are: "A Place in the Sun" (George Stevens, 1951), "Cat on a Hot Tin Roof" (Richard Brooks, 1958), "Suddenly, Last Summer" (Joseph L. Mankiewicz, 1959), "Who's Afraid of Virginia Woolf?" (Mike Nichols, 1960 -- for which Taylor won her second Oscar for best actress) -- all but the first of which, oddly, are based on stage plays and, as Paglia notes, Taylor did not have a stage background.

And then there's "Boom!" (Joseph Losey, 1968)¹ -- one of the strangest movies you will ever see. Based on Tennessee Williams' play, "The Milk Train Doesn't Stop Here Anymore," it's one of John Waters' favorite "failed art films." And Roger Ebert wrote of it:

There are different kinds of bad movies. Some are simply wretchedly bad, like well, you know. Others are bad but fascinating and "Boom!" is one of these.

It isn't successful, it doesn't work, but so much money and brute energy were lavished on the production that it's fun to sit there and watch.

Being so awkward and hopeless on its most fundamental level, this is a film for voyeurs.

Waters says the movie was available on DVD for about five minutes and then went out of print again. You can still get it on PAL Region 2 discs from the UK, though, and it occasionally shows up on TCM. Don't miss it.

¹ Waters: "It was a giant flop when it came out. They had it called 'Boom' and it didn't work so they retitled it 'Boom!' with an exclamation point, which is the most pitiful marketing I've ever seen."