Don't let this affect your opinion of Juno... 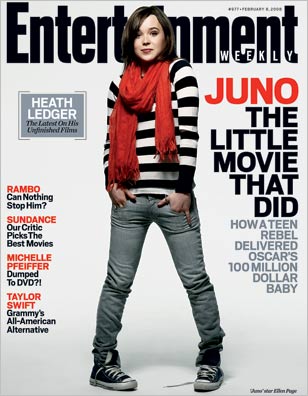 UPDATED (below): There's Ellen Page on the cover of Entertainment Weekly next to the headline: "Juno: The Little Movie That Did." Subhead: "How a Teen Rebel Delivered Oscar's 100 Million Dollar Baby." This is when I feel a little sorry for people who didn't see the movie back when they could still at least feel like they were discovering it for themselves -- even if the "Little Movie That Could" was just a Fox Searchlight marketing ploy all along. Anyway, it turned out to be a great way to sell the movie: 4 big-time Oscar nominations (Best Picture, Actress, Director, Original Screenplay) and triple-digit milliones in theaters. (And that's a digit that can't be undid.)

Game blogger Surfer Girl even started a hilarious rumor that "Juno: The Video Game" was in development, "the most realistic teenage pregnancy simulation to date, for Playstation 3, Xbox 360, PC, and Wii. Crave could not get Ellen Page for the game, so in her place will be Jamie-Lynn Spears. For portable fans, a track-and-field title set in the Junoverse will hit DS and PSP."

(Just imagine wielding a Wii pork sword. Can you impregnate Juno -- and win?)

The post was labeled "joke," but that didn't stop Gamespot News from reporting it as a really maybe sorta true story, straight outta DICE Summit. (BTW, just above the "Juno" item, Surfer Girl offered this: "For the Blu-Ray release of 'There Will Be Blood,' Backbone Entertainment is working on 'an epic milkshake drinking adventure' that will feature the likeness of Daniel Day-Lewis, it will take up an estimated 5GB and feature at least twenty hours of slurping action, plus multiplayer.")

"I drink your milkshake!" is the golden ticket that will sell this thing with the people who are too lazy to read reviews and don't care that much about awards. It's simple, it's viral, it's primitive...it will travel. Make the "I drink your milkshake" T-shirts, hand out the buttons and bumper stickers, cut the TV and radio ads that emphasize the line over and over, and sell this brilliant but undeniably gnarly film as a kind of half-melodrama, half-hoot." -- Jeffrey Wells, January 9, 2008

The proper response to this hype and hoopla would be: "So what?" It's all after-the-fact anyway, and it has nothing to do with the movies themselves. Although, at least, the now-ubiquitous "I drink your MILKSHAKE!" catchphrase from "TWBB," which by now even USA Today has reported as a viral phenomenon, was inspired by the delivery of a line that's actually in the movie. (The brief "Friend-o" fad seems to have passed.)

The Reeler's S.T. VanAirsdale says that he likes Juno, and all its Oscar nominations, but...

In my perfect world, none of this matters in the first place, and the Academy gets it right every year. But the nominations do matter, and the Academy is always hurting the ones it purports to love. No one can take away "Juno"’s $100 million gross or marketing savvy, but its loyalists are now in the position of having to defend a film whose assiduous charm, like "Little Miss Sunshine"’s before it, is suddenly its biggest liability. I know it’s an honor just to be nominated, Juno, but I really wish you had quit while you were ahead.

Advertisement
"Little Miss Sunshine" is the Best Picture/Original Screenplay nominee everyone seems to be comparing "Juno" to this year. Both are comedies about families, and both end sweetly. I know people who liked "LMS" at Sundance, but were sick of hearing about it by the time the Oscars rolled around. (Actually, a similar backlash has been visited upon "No Country for Old Men" since its release. Although it's still a critical favorite, a box-office hit, and a leading Oscar contender, it's also come in for more than its share of: "What's all the hype about?" criticism. At this rate, you can be sure "There Will Be Blood" -- no matter what its riveting qualities, will be next on the Backlash List.)

The Bagger was never much of a critic, but he used to cover music occasionally and he was always struck by what happened when some indie plaything hit it big — the Replacements or Liz Phair back in the day, and the Strokes or Clap Your Hands Say Yeah more recently. He learned that you could almost set your watch by the backlash. Critics work to lift worthy work into public consciousness, but once it is embraced by the tawdry masses, they drop their treasure like a box of rocks.

Is that what's happening? Is "Juno" a fashion victim?

UPDATED 2/10/08:In a piece called "Hating Juno: How the backlash started," published the same day as this one, Slate's Dana Stevens wrote:

Then came the anti-backlash backlash. The day the nominations came out, "Simpsons" writer Tim Long piped up meekly, "Is it so wrong to have liked Juno a little?" Alone among the movies of 2007, "Juno" is a movie you adore or revile, attack or defend, and maybe change your mind about—not just after a second viewing, but halfway through the first. [...]

"Juno" may not have had me at hello, but it managed to win me over by the time Juno's carapace of cleverness finally shows its first chink, as she admits to her disappointed father (J.K. Simmons), "I really don't know what kind of girl I am." Maybe it was Ellen Page's luminous face and brazen self-confidence, or the unexpected transformation of Jennifer Garner's character—beautifully played by Garner and, yes, beautifully written by Diablo Cody. Michael Cera's exquisite comic timing makes even his underwritten character come alive. And I know I'm supposed to sneer at the precious indie-rock soundtrack, but some of those songs are really catchy. I tried to approach a second viewing in the mood of critical dyspepsia capable of inspiring one-liners like "[Juno] is a vintage lunch box purse with nothing in it." But I have a hard time despising this sweet little movie, even if much of the acclaim being heaped upon it (best director? best picture?) feels like overkill.

At this point, it's difficult to separate "Juno" hatred itself from a more general ennui inspired by the film's marketing campaign. There's the maddening ubiquity of the movie's pseudonymous author (say it with me now: stripper turned blogger turned Oscar-nominated screenwriter!). Cody is now writing the back-page column for Entertainment Weekly (I'll leave the question of whether her writing there is groundbreakingly sassy or painfully self-indulgent to be battled out in the feature's bloodthirsty comments section). Then there's the faux-humble Oscar push that's trying to position Juno as the "little movie that could," even as Fox throws the full weight of its marketing dollars behind it.

Advertisement
So, to rephrase some of my questions above: How can you tell how much of your response to a film is based on what's onscreen, and how much is based on the marketing campaign or "what you've heard"? Are you oblivious to, or unaffected by, hype? (Most people say advertising does not affect them; studies demonstrate that most people are simply unaware of how much advertising affects them.) Do you think your response to, say, "Juno" would have been different if you'd seen it at a film festival in September, or on its opening weekend in December?