Diminished by the movies 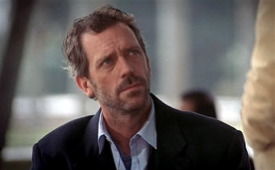 Hugh Laurie as Dr. House. His mind is his temple, his body is his house.

"Two TV icons are demoted to the big screen." That's the headline over Christopher Orr's piece in The New Republic about the careers of Jennifer Aniston and Sarah Jessica Parker, who seem diminished in the multiplex. Not that their TV shows -- "Friends" and "Sex in the City," respectively -- were anything special. They made for mediocre television at best, and on the occasions I attempted to pay attention to them I likened the experience to visiting a distant planet populated by synthetic creatures who could not have been less interestingly humanoid if they tried. I did not enjoy my time spent in the company of these banal, studio-fashioned aliens, and I question their resemblance to any carbon-based life-forms on Earth.

But at least on their long-running series Aniston and Parker were big, pretty fish in their teeny-tiny sitcom puddles. In the movies ("Rumor Has It," "The Family Stone"), the comedy hasn't gotten any bigger or better, but they've seemed outscaled, like little floundering fish out of water. I'm not convinced either has the presence for the big screen, although Aniston was terrific in "The Good Girl" (a small movie) and Parker, who strikes me as more of a character actress than a leading lady, was suitably kooky and vivacious in Steve Martin's "L.A. Story" and hilarious as Johnny Depp's exasperated wife in Tim Burton's low-scale "Ed Wood." On the other hand, in the company of incandescent actresses such as Catherine Keener, Frances McDormand and Joan Cusack in "Friends With Money," Aniston -- ostensibly the biggest name in the cast -- faded out, becoming blurry and indistinct almost like that actor played by Robin Williams in Woody Allen's "Deconstructing Harry."

Orr puts it this way:

There was a time, not so long ago, when going from TV star to movie star was an unquestioned step upward. George Clooney managed the transition with such aplomb a few years back that the most recent Oscars ceremony essentially anointed him King of Hollywood. [It wasn't that easy. Orr forgets the failed pre-"Out of Sight" attempts like "One Fine Day," "Batman & Robin" and "The Peacemaker" that prompted many to question whether Clooney had the stuff movies are made of.] But lately, as television has innovated and improved and mainstream film largely stagnated, it's not clear that the old hierarchy still pertains, at least not for those fortunate enough to star on successful series. Take Kiefer Sutherland, who was never more than a middling presence on the big screen, but has become a contemporary icon on the little one. Or take Aniston and Parker: Both have had plenty of bites at the cinematic apple and are scheduled for plenty more, but neither is likely ever again to have a role with the cultural stature of a Rachel Green or Carrie Bradshaw. Big-screen outings such as "Rumor Has It" and "The Family Stone" -- both released on video this month--are more likely to erase the actresses from public memory than to plant them there anew.

John Patterson at The Guardian ("Move Over Hollywood") agrees that mainstream movies have largely taken a back seat to television when it comes to "cultural stature," impact, innovation and creativity:

Today, US television is where cultural debates are sparked, and where popular culture renews and reinvigorates itself. Over the past 10 years, TV has slowly seized the creative initiative from the movies and run with it, all the way to the Emmys -- and to the bank. With entire seasons of TV shows available on DVD and cheap iPod downloads of popular shows online, television is now teeming with beautifully written, well-made programmes, including "The Sopranos," "Deadwood," "Law & Order" and its many spin-offs, "Lost," "24," "Six Feet Under," "The Shield" and "Nip/Tuck." Umbilically connected to the internet, TV is also able to attach itself swiftly to new currents in subterranean culture and bring them to viewers in a matter of days. This inventiveness affects all areas, from news to drama. And it is because of the sudden upsurge in TV drama, along with the immense fortunes to be made in it, that so many names we associate with the cinema are moving to television.

Advertisement
The article quotes Lorraine Bracco of "The Sopranos" in Entertainment Weekly: "I haven't seen a movie that's inspired me as much as 'The Sopranos' has. A lot of our one-hour episodes are as good as any movie out there today."

Dr. Melfi is right. I observed recently that a series like "24" makes a movie like "Mission: Impossible III" (or "Miiii") irrelevant. The movie may be bigger and louder, but that doesn't make it more engaging when it's not better written, acted or directed, and the special effects and stunts often aren't nearly as convincing or compelling. Meanwhile, "Veronica Mars" was doing splendid Southern California high school film noir long before the acclaimed indie "Brick," and "The Sorpranos" has more to say about the history and mythology of the gangster genre, from "Scarface" (the 1932 Hawks/Muni original) to "The Godfather" to "Scarface" (the DePalma/Pacino remake) to "GoodFellas," than any gangster picture since "GoodFellas." From what I've seen, "Deadwood" is doing things with the Western that no movie would dare these days. After "Twin Peaks" (and the failed series pilot released as "Mulholland Drive"), David Lynch doesn't have a show on the air anymore, but the mysterious, surreal spirit of those creations can be felt in a show like "Lost."

Last week I watched the season finale of "House," a crisp and economical medical-detective series that I watch mainly for Hugh Laurie's misanthropic title character. The show itself is as formulaic as most American movies (and the writing often similarly just above functional), but Laurie is a more interesting leading actor than most of the performers who get cast as the leads in studio pictures today. One thing I really like about "House" is how it just begins and ends -- with none of the transitional filler usually employed to pad out the hour. Several times when the series has gone into its last commercial break (which I promptly speed through with TiVo), I've expected there to be another segment -- but it's over. I realize that's just because we've been conditioned to expect these little unnecessary codas. But "House," like its main character, is too prickly and abrupt for that. (They really ought to just cut to black for a couple beats at the end; it would improve the effect.)

I admit, some of the (downright Cronenbergian) medical imagery on the season finale (a man with a horribly blistered and swollen tongue; an eyeball erupting from its socket; an exploding scrotum; a butchery by surgical machinery) was so gross and explicit I had to block part of the screen from view with my hand. It's as graphic as the stuff in horror movies, but it's medical and "CSI" has made that kind of gore acceptable even on broadcast television.

But despite this (and not because of it), I came away feeling that if this episode -- basically an autopsy, or exploratory surgery, performed by Dr. House on his own body, character and personality -- had been presented as a film (I imagine it as a David Cronenberg exploration of the mind and the flesh, or a Francois Ozon psycho-thriller, or maybe even a Mamet picture where it's not clear who's conning whom), it would have played film festivals and received serious critical attention. But here it was being offered as commercial television. For adults.

Meanwhile, back at the multiplexes: For the next few months its superheroes, cartoons and anti-Christs. I don't know about you, but I'm superheroed out. Maybe in the fall we'll get movies about people again.