“Cinema is the history of boys photographing girls.” Or so Jean-Luc Godard is claimed to have said. I thought of his words while watching “One Fine Day,” an uninspired formula movie with another fine performance by Michelle Pfeiffer. She does everything in this movie that a much better movie would have required from her, but the screenplay lets her down.

Since Pfeiffer is one of the producers, she can blame herself; she *wanted* to make this predictable fluff about two beautiful people who engage in a verbal sparring match for 90 minutes while we patiently wait for them to acknowledge that they have fallen hopelessly in love. She completes a three-dimensional, appealing character and puts her in a lockstep plot.

The movie stars Pfeiffer as Melanie, a divorced mom who has some kind of a job involving big architectural projects. George Clooney plays Jack, a divorced columnist for the New York Daily News. Through a series of coincidences, both single parents are suddenly required to take care of their kids for the day, and then circumstances throw them together, again and again.

So OK, what's going to happen? Consider this to be like the crossword puzzle. Get out your pencils.

The kids, Maggie and Sammy, (like/dislike) each other. When their parents are distracted for a moment, they (run out of sight/stay where they're told to stay). When the parents try to find them, they (do, with great relief/lose them, and the movie turns into “Ransom”). When both parents use identical cellular phones, they (accidentally exchange phones and get each other's calls/keep their own phones and get all of their own calls). When Maggie grows attached to some kittens, her father (lets her keep them/tells her to forget them). After the Pfeiffer character criticizes the Clooney character for being late and irresponsible, she herself is (late and irresponsible/always on time). Toward the end of the film, when it appears certain they are in love, a silly misunderstanding (delays this realization/ends in a kiss).

And so on. This is the kind of movie you can sing along with. I amused myself by trying to figure out Michelle Pfeiffer's job. She works for a big company, I guess, but her only colleague seems to be her elderly and powerful boss. When she trips and falls and breaks the model of a big architectural project, it's her job to take it downtown and hire a guy to glue it back together again, and yet she also seems to be the designer, or planner, or salesperson, or broker, or something, of this whole undertaking.

We don't know for sure because it's all flimflam. Her job scenes should be subtitled “Obligatory Scenes Necessary So Little Maggie Can Be Taken to the Office.” Jack's newspaper job is easier to understand, especially after he explains it takes him “about an hour” to write a column, and the mayor is planning to sue him after yesterday's column. Everybody knows columnists like that.

Pfeiffer looks, acts and sounds wonderful throughout all of this, and George Clooney is perfectly serviceable as a romantic lead, sort of a Mel Gibson lite. I liked them. I wanted them to get together. I wanted them to live happily ever after. The sooner the better. 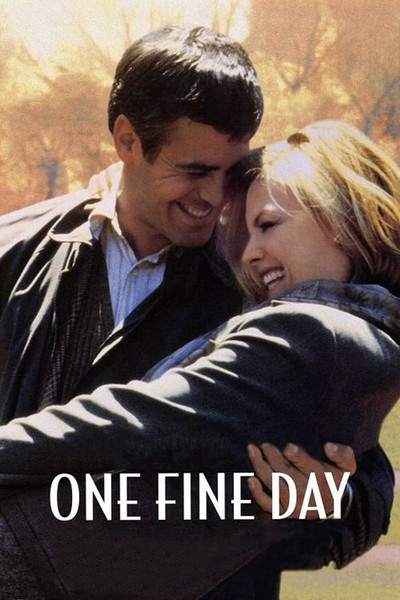