Detour: There's an arty road ahead 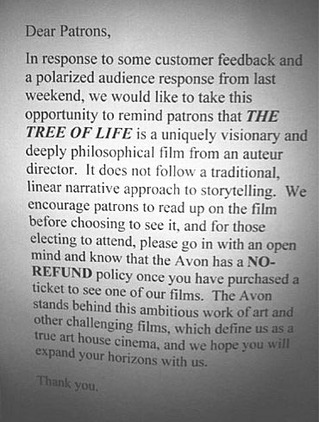 There was a small but vocal minority of patrons who walked out of the film, but there were a few individuals who were fairly nasty and belligerent towards the management staff, demanding their money back. There have been a significant number of people who were fascinated by the film and there were plenty of individuals who have written to us to tell us that they thought the film was a masterpiece.

And this isn't the first time the Avon has taken this approach, Birnbaum said:

Like any arthouse theater, we have had films that were met with disdain, and there are films that had a universally negative response. Two that come to mind were "Me and You and Everyone We Know" and "Margot at the Wedding." In general, dysfunctional suburban films tend to be received very poorly in our market. I certainly wouldn't put "The Tree of Life" in that category; the negative response to the film isn't for that reason. It's more for the particular visual and stylistic approach in the film that is so different from what people are accustomed to these days.

I booked what we used to call "specialized" films in Seattle -- for academic series at the University of Washington, for the Seattle International Film Festival, and for commercial arthouses (first the Grand Illusion and University Cinemas, then the Market Theater) -- in the 1980s, and I understand the importance of preparing people for what they're going to see. (Heck, at the Market we had a two-week first-run theatrical engagement of Peter Van Greenway's dazzling "A Zed and Two Noughts," about a pair of widowered twins who become obsessed with alphabetically organizing and filming plants and animals as they rot, from Apple to Zebra. Not good for concessions sales. I kind of wish we'd put up a sign: "Warning: This movie exhibits signs of decay.") As I recall, we had a (not terribly strict) half-hour refund policy: If you just couldn't stand it, you could escape in the first 30 minutes and still get your money back. Once an indignant couple was so offended by our choice of cartoons (we showed newly struck 35mm Looney Tunes before every feature at the Market -- and NO ADS, except for trailers) that Ann, the owner, handed them their money and practically shoved them out the door: They were shocked, shocked that we would show Chuck Jones' Oscar-winning Pepe LePew short, "For Scent-imental Reasons," before a restored re-release of Truffaut's "Jules and Jim." Some people have no sense of humor -- or proportion.

I recall some theaters posting warnings about the swishy hand-held camerawork in the opening scene (especially) of Woody Allen's "Husbands and Wives" in 1992 because patrons were getting nauseous. (This was not the kind of publicity-stunt nausea that could be exploited, like with 1973's "Mark of the Devil" or 1973's "The Exorcist": "You'll be so scared and grossed out you'll throw up!") But this has to do with warning people about possible involuntary physiological reactions, not matters of cinematic values or taste. 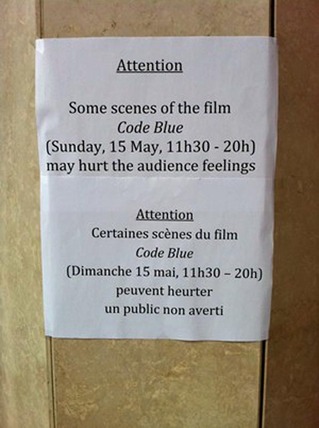 In the Directors' Fortnight at Cannes this year there was a film by Urszula Antoniak called "Code Blue" that featured gruesome scenes of rape and murder. Barbara Scharres of the Gene Siskel Film Center wrote: "I don't have a problem with violence, death, or any form of sexuality as content in art, but I do have a problem with a film that seems like an arty, empty, beautifully-composed facade for half-baked ideas."

This film, too, came with a posted warning at the box-office that "Some scenes of the film 'Code Blue'... may hurt the audience feelings." Or the audience may just hate it. Scharres described the scene at the screening she attended:

There were walkouts throughout, but about ten minutes from the end, a large part of the audience simply decided that they'd had enough and started streaming out. I've never seen anything to match it at Cannes. So many people were leaving that the guards had to prop open the exit doors although the film wasn't over.

Todd Brown at twitchfilm.com, who took the photo of the "Code Blue" sign on his way in (not on his way out), begged: "Please, please, please, MPAA, can we get this added as an official ratings category?"

I get no kick from sheer pain, but I confess to a certain sadistic streak when it comes to artful experimentation. When I was a student programmer, I loved watching people flee for the exits during the "Be Black, Baby" National Intellectual Television "documentary" in the middle of Brian DePalma's ingenious comedy of voyeurism, "Hi, Mom!" (1970). People actually forget what they're watching and it's not until Robert De Niro reappears as a cop (we've seen him audition for the part) that the audience (onscreen and in the theater) starts to awaken from the nightmare. And then comes the payoff, which I won't reveal here.

Art house exhibitors depend heavily on reviews to inform audiences about the movies they show. These aren't the kinds of films that have multi-million-dollar advertising and promotional campaigns behind them (pick up your "Tree of Life" action figures, souvenir cups and frog rockets at your local Taco Bell), so you hope your audience will self-select. At the Market (in Seattle's historic Pike Place Market), we only showed movies we actually liked because 1) we had only 250 seats and a single screen, so we could end up playing the same movie for weeks or months; and 2) we figured our judgment was one of our best selling points. People became regulars because they learned to trust us.

Nevertheless, I remember a few mystified moviegoers walking out on Jim Jarmusch's "Stranger Than Paradise" (1984) or Ross McElwee's "Sherman's March" (1985) simply because they didn't know how to process a black-and-white movie built out of long takes with black leader between the shots, or a 16mm documentary about a filmmaker trying to make a documentary about the Civil War while using his camera to meet girls. I don't blame anybody for feeling a little disoriented. They should feel a little disoriented; that's part of the pleasure of watching these movies. They take you into unfamiliar territory.

This reminds me: Over at Tales of Odie-nary Madness, Odienator suggests audience warnings for other films, such as "Thor":

Please be advised that Thor is a piece of shit. Granted, it is directed by Kenneth Branagh, but not the one you remember from Henry V and Much Ado About Nothing. This is the one from Wild Wild West. Thor also stars the Anthony Hopkins from such 70's films as Audrey Rose and Magic, and the Natalie Portman who proved that doubles did more than just dance for her in Black Swan. They acted for her too.

Remember that the Odie-On has a strict NO REFUND policy. You got what you deserved for even considering to see a movie about some blonde asshole from outer space swinging a hammer.

I can't help but wonder what kinds of warnings the Avon came up with for "Me and You and Everyone We Know" ("Those with a low tweeness tolerance may become violently ill") and "Margot at the Wedding" ("Please be aware that these are the most loathsome specimens of humanity that you will ever see in a film that does not feature brutal crimes or investment bankers").

"The Tree of Life" was reportedly met with a mixture of boos and applause at its Cannes press screening, and I can understand that (particularly because the ending on the beach contains its weakest, most banal imagery). But I'm mildly surprised to hear, from moviegoers across the U.S., that walkouts are common, even if it's only a small percentage of the audience. (I've seen the word "geezers" used repeatedly.) You get a taste of the marquee names, Brad Pitt and Sean Penn, up-front (if that's what you've come for) and then the movie goes scooting off across space and time, but when it does you know it's not done with them and that it will circle back again. Besides, I'd think anybody who's ever heard of Terrence Malick would stick around just to see where he's going -- even if those who've seen "The Thin Red Line" and "The New World" may feel that they've been through some of this terrain before.

Of course, at the Egyptian Theater in Seattle (home of the Seattle International Film Festival), people applauded after the showing I attended. But Seattleites do that. (We'll clap for anything that seems artsy in earnest.) The crowd I saw it with was a good mix of what Brooklynites insist on calling "hipsters" these days (can't stand that term), gray hairs (like me -- and even older!) and folks I was too lazy to stereotype.

So, what do you think? The MPAA looks out for sex, nudity, violence, language and drug use (including smoking tobacco); do we need Art Warnings, too? Do even art-house audiences need to be re-trained -- or at least alerted -- to hang in there when a movie is anything other than conventional? Is that the equivalent of pre-labeling such films as "cultural vegetables? (See "Into the Great Big Boring.") Should cinephiles be warned before buying tickets to mainstream multiplex releases when, in the estimation of theater management, there's really nothing to sustain the interest of anyone past puberty? Got any ideas for warnings you'd like to see on particular pictures? Is the whole idea of doing this simply smart consumer advice for a theater that enforces a no-refund policy? Or is it maybe a little condescending? Or all of the above?

(Please feel free to sing the title of this post to the tune of the 1945 Spade Cooley/Tex Williams hit. Or the 1951 Patti Page version, if you prefer.)