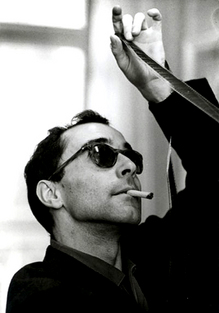 Commenting on Jonathan Rosenbaum's article in Cineaste ("DVDs: A New Form of Collective Cinephilia," Michael Althen wrote that, for him, cinema is not what it used to be:

It only exists in festivals -- and on DVD. That's a long way from my/our former belief that cinema can only exist if it follows the well-known liturgy of an anonymous mass staring at a screen. On the other hand, this was a somehow romantic construct fueled by Truffaut's "Day by Night" and other cinephile movies. To be honest, that was not how I discovered the Movies. Born in [the] Sixties, growing up in a suburb, I saw most of the influential movies of my life on TV: "Le Samourai," "The Party," "Jules and Jim," "Citizen Kane", "Le scandale"... Did these less-than-ideal-viewing-circumstances diminish in any way the experience? Maybe.... [Maybe] Cinema is not dead -- but it's different. Its future will be defined by those who grow up having the possibility to choose between Blu-ray at home and 35mm somewhere in the dark.

It seems that cinema, like criticism, is forever dying and never quite dead. (See my recent post, "It's the End of the Cinema as we know it (then and now).") Movie formats and formulas are always being tinkered with -- which is not to say you have to like the new recipes, any more than you were obliged to savor the flavor of New Coke back in the 1980s.

But there's no contesting the reality that, thanks to digital delivery systems (DVD, Blu-ray, downloads), more films, old and new are available in high quality prints than ever before. Thanks to improved technologies, more films are being seen under better circumstances (including high-definition home and computer screens) than at any time in history. To fully appreciate just how good most films now look on digital video, it really helps if you grew up watching movies not only in first-run downtown movie palaces but in neighborhood second-run and bargain theaters, on cathode-ray televisions (first bluish-black-and-white, then garish color), or in classrooms with 16mm Bell & Howell projectors and beat-up nontheatrical prints (often double dupes), or even the well-worn, splicey 35 mm prints that endlessly travelled the repertory-house circuit.

Rosenbaum himself argues that the debate over the optimal way to experience movies (both aesthetically and socially) has been greatly oversimplified:

For far too long, an absolutist either/or mentality has been ruling the debate about changes in global film culture brought about by DVDs (and much the same mentality has needlessly assumed that we have to "choose" between reading about film on paper or on the Internet). Presumably, one is forced to either go along with the doubts and demurrals of some of my favorite programmers and archivists... who stand up for original formats, or to embrace the more optimistic projections of bloggers such as myself and Girish Shambu, who tend to emphasize how many films can be seen nowadays on DVD over the diminished properties and quality of image and sound found in nontheatrical venues.

Last week when I went to see "Splice" at an AMC multiplex in North Seattle, I couldn't help but think how much better the movie would have played at home on my five-year-old 55-inch Sony Bravia and makeshift 5.1 surround system than it did on the big screen in the nearly unoccupied auditorium. It wasn't dark enough in the room, the print was soft (as was the projection), there wasn't enough light on the screen -- even the sound was less than vivid, perhaps due in part to the muddied acoustics of the empty hall. It's not that anything was particularly wrong with the presentation, it just wasn't very good.

(Ironically, the automated platter systems most multiplexes installed in the '70s and '80s -- so simple even a teenager could simply push a button, thus sparing the theater the expense of a union projectionist -- have improved to the point that the overall quality of projection has now risen to the mediocre. There seem to be fewer breakages, equipment failures, egregious focusing and framing problems... but most movies look pretty blah in these characterless boxes anyway. At least they look better than the unavoidable ads and the trailers, many of which are projected in murky video with the houselights half up.)

Most of the complaints about "the theatrical experience" -- justified or not -- haven't changed for decades: rude, noisy audiences; high ticket and concession prices; having to actually pay to sit, captive, while you are bombarded with advertising... And now, of course, there are tweets and texts flashing all over the place, too. No thanks -- I'd rather watch a movie in a dark, quiet room on a sharp screen, enveloped in clear, sharp sound. Whether I'm watching "Splice" or a Lubitsch picture from the '30s, chances are it's going to be a better experience than I could get in almost any theater -- and I can arrange the time and place myself.

Which brings me to the other key issue addressed in Rosenbaum's piece: the social element. The ways we communicate now, through phones and computers, through Facebook as well as face-to-face (thank you), have been extended to our involvement with, and discourse about, movies. Rosenbaum writes:

In the past, cinephilia as a collective experience and activity was almost entirely a matter of audiences experiencing films together, as part of the same crowd--or else, at the very least, comparing notes months later in paper publications. Today there's a new kind of networking that's based much less on people being in the same places at the same times and more on alerting other people to what's available and where and how, and then reflecting on what's seen and heard afterwards, with several others, via the Internet.

Weighing these two experiences against one another, the emphasis has mainly been on the material differences between viewing a film in 35mm on a large cinema screen and viewing a digital transfer on a home screen that is almost always smaller. But surely the social differences are no less pronounced and pertinent, and the changes in how films are now being experienced in social terms apart from their viewing also need to be explored. Those who insist that what was formerly a communal activity has now become a solitary one are often committing the error of limiting the social experience of cinema to a particular set of viewing conditions when it has always been more complicated than that, especially once one takes in such activities as film criticism, film education, and various kinds of discussion. So the extensions of these latter activities via blogging and chatgroups now have to be factored in, along with the relative reduction of people seeing the same films at the same time in the same viewing spaces.

Anybody who follows an ad hoc network of movie bloggers (paid or unpaid) knows that these loosely organized, often overlapping communities carry on discussions that aren't necessarily connected to films that are new in theatrical release. Just as there's been a wide-ranging consideration of "slow/contemplative cinema" in recent weeks in film sites, magazines and personal blogs (Nick James, Steven Shaviro, Harry Tuttle, Vadim Rizov, Glenn Kenny, et al. -- referring back to a 2008 article by Matthew Flanagan, "Towards an Aesthetic of Slow in Contemporary Cinema"), there's no rush to wrap it up. I'm just mentioning it now, though I've been following and thinking about it for, gosh, more than a month. Good grief! That's approximately six years in Internet Time, isn't it? (I'm with Girish on this: we need a Slow Internet Movement along the lines of Slow Food and Slow Cinema, if we're really going to take advantage of the archival nature of the web. It's not just about being first and fast and superficial; it's an opportunity to consider a spectrum of arguments and evidence.)

Anyway, my point -- and Rosenbaum's -- is that the Internet provides a valuable and enjoyable forum for movie-related social interactions (even if a troll should intrude upon occasion). As for the "audience experience," Rosenbaum simply points out that, in the case of many worthwhile films, theatrical screenings are not an option, much less the only option, available to those who want to see them.

He mentions Jacques Rivette' and Suzanne Schiffman's twelve-hour "Out 1" (1971) and Bela Tarr's seven-hour "Sátantángó" (1994) as "extreme examples" -- which got me to thinking once again about whether all films are really "meant to be seen" with an audience. (What if you show up at the theater and there's only a handful of people there? Should you leave and ask for your money back because you're not getting the "full theatrical experience" the filmmakers theoretically intended?)

This issue has long bugged me. When I was a daily newspaper film critic (especially in Los Angeles), studios would invariably insist on screening comedies and action movies in a large auditorium with an invited (usually radio-station giveaway) audience. The idea behind this strategy is that critics would think the movie was funnier or more rousing if they were surrounded by a lot of other people with an incentive to laugh and cheer (after all, they were getting to see a free movie before it opened!). I do not think this worked particularly well for me. I sometimes resented the knee-jerk audience responses (like having someone elbow you in the side to tell you when you're supposed to react). Other times, it was fine. I would recommend seeing Marx Brothers comedies with an audience the first time, if you can. The gags and performances were honed on the road in live tours so the timing for laughs would be just right; when you watch them at home for the 400th time they can appear to have a little too much air in them. As for Buster Keaton, the greatest filmmaker of all time, it doesn't really matter because you may spend so much time wide-eyed in awe that laughing becomes almost incidental. (Some things in Keaton are so funny I honestly do forget to laugh.)

Whether or not you think cinema is dead, or you have reached the end of your own particular road, cinephilia itself is not a thing of the past.