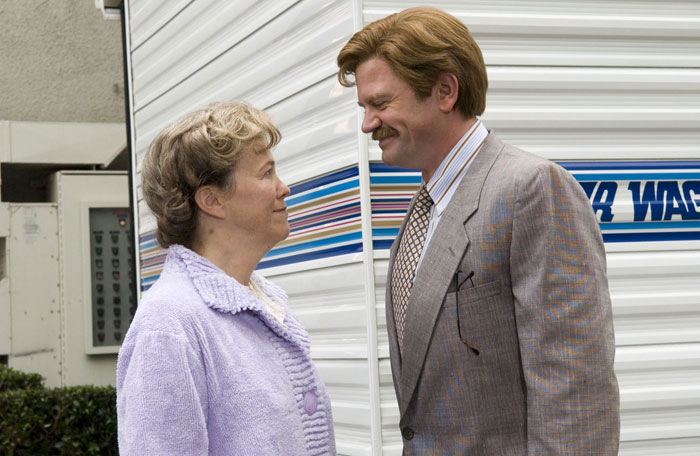 Catherine O'Hara, the funniest person on the planet, with John Michael Higgins, who's no slouch himself.

Please note that, in the list of Categories in the column at right, there is one topic that still has no entires. That is "Oscars." Because, really, after last year what's even left to joke about? And it's only November.

Nevertheless, I have a couple of Chicago Sun-Times/RogerEbert.com reviews this week, and one of them is of Christopher Guest's "For Your Consideration":

Hey, I heard Catherine O'Hara is so splendid in Christopher Guest's latest ensemble comedy, "For Your Consideration," she's a shoo-in for an Oscar nomination.

It's true -- she is that good. And she's long overdue. (I would already have given her an Oscar, an Emmy, a Grammy, a Peabody, a Nobel and a People's Global Golden Choice Award for her performances as Lola Heatherton and Dusty Towne in the 1982 SCTV "Network 90" Christmas special alone.)

Perhaps the two biggest problems with "Fur: An Imaginary Portrait of Diane Arbus" are the last two words of the title. This through-the-looking-glass ''Beauty and the Beast'' fable has little to do with Diane Arbus, the famous photographer, or with her work, which is not seen in the film. As a Lewis Carroll title card explains, this "is not a historical biography" but instead "reaches beyond reality to express what might have been Arbus' inner experience on her extraordinary path" to becoming an artist. Sure. All that's missing is a sense of who Arbus was, and how the fictional journey depicted in the film is reflected in (or, rather, distilled from) her art.

Meanwhile, over at The Onion, the question is considered: "Are Oscar Prognosticators Evil?."