Hey, I heard Catherine O'Hara is so splendid in Christopher Guest's latest ensemble comedy, "For Your Consideration," she's a shoo-in for an Oscar nomination.

It's true -- she is that good. And she's long overdue. (I would already have given her an Oscar, an Emmy, a Grammy, a Peabody, a Nobel and a People's Global Golden Choice Award for her performances as Lola Heatherton and Dusty Towne in the 1982 SCTV "Network 90" Christmas special alone.)

I'm serious. Except for the Oscar buzz part, because I really don't know if there's any Oscar buzz about O'Hara (though I also don't know why there shouldn't be). The awards rumor just happens to be part of the anecdotal story of "For Your Consideration," another improvisational lampoon from the most comedically inspired movie stock company since the heyday of Preston Sturges. "Waiting For Guffman," "Best In Show," "A Mighty Wind" -- it's an unalloyed joy every time these people get together to make a movie.

Guest co-wrote and directed the definitive and most uncannily incisive, satire of modern indie-Hollywood back in 1989: "The Big Picture," in which a film-school graduate and award-winning short-film director (Kevin Bacon) endures a passage through major-studio development hell on the way to making his first low-budget feature. Since "Guffman" in 1996, when Guest revived the pseudo-documentary approach he had helped pioneer with "This Is Spinal Tap," his movies in that style have focused on show biz of some sort -- community musical theater, a dog show, a folk concert reunion -- and the laughs stem from the characters' ambivalence about indulging their wildest ambitions, and their inestimable faith in the magnitude of their (or their dogs') own talents. And there's no more ripe subject for comedy than vanity.

In "For Your Consideration," the Guest Repertory Company gets Oscar fever. It begins with a blogger who posts a bit of Oscar-baiting hyperbole after a visit to the set of the Sunfish Classics D-list production, "Home For Purim," an earnest and sentimental melodrama about a Jewish family in the Deep South during WWII. The clan's dying matriarch is played by Marilyn Hack (O'Hara), a former '80s TV series regular whose very name evokes precisely the right half-forgotten tone: "Oh, yeah. Who was she again?"

All it takes is this one spark about Marilyn's "Oscar-worthy performance" (or some such phrase -- probably typed by a fan still nurturing an adolescent crush) to jump-start the buzz-apparatus into furious motion.

"For Your Consideration" captures certain essential, absurd truths about how movies are made these days: The marketing process begins before the film is made and then continues during production and post-production all the way through its release; the fate of a picture is often determined by rumors and perceptions that take shape long before the movie itself has even wrapped, and rumors take on their own reality. The Academy Awards are, of course, just another election, and as such heavily influenced by buzz, timing, momentum, lobbying, strategic public appearances and other the machinery that has little or nothing to do with the actual candidates. It's politics.

Any further elaboration of the loosely constructed plot would be a disservice (because it would only give away jokes). So, let a listing of some of the major characters suffice to bring an anticipatory smile to your face: Harry Shearer as Victor Allan Miller, best-known for playing a frankfurter in television commercials; Eugene Levy as Morley Orfkin, Miller's worthless agent; John Michael Higgins as Corey Taft, clueless publicist; Jennifer Coolidge as Whitney Taylor Brown, superfluous producer/financier; Ed Begley Jr. as Sandy Lane, stylist to the semi-stars; Parker Posey and Christopher Monyihan as romantically entangled co-stars; Bob Balaban and Michael McKean as the screenwriters; Jane Lynch and Fred Willard as hosts of an "Entertainment Tonight"-like TV show; Michael Hitchcock and Don Lake as TV film critics; Ricky Gervais and Guest himself as the director of "Home for Purim."

Like Guest's other films, "For Your Consideration" is extremely funny and tinged with sadness and disappointment, the kind that accompanies all of our inevitable adjustments to dreams deferred and downsized. Because of that, even the most shameless characters retain some teensy core of dignity. The movie features some big laughs, a lot of modest ones, and performances so exquisitely fresh and precise that they make laughter almost irrelevant -- in a way that only genius can.

Me, I have developed such affection for these performers (and others I haven't even mentioned) and such appreciation for their brilliance that I just sat there with a big smile on my face the whole time. 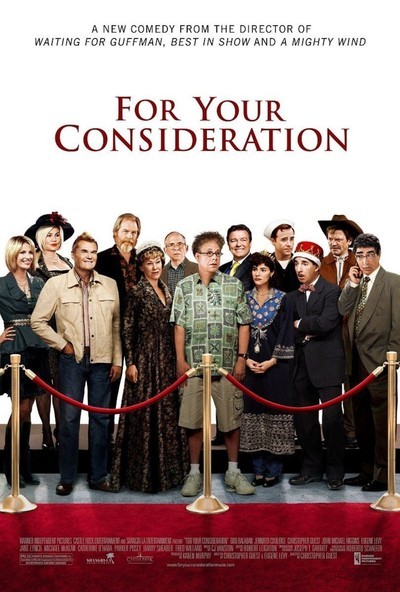