And the Muriel™ for the Oscar™ for Best Picture goes to...

In case you didn't know, the top five Muriel Awards for Best Picture of 2009 are:

Surprisingly, three of those are among the ten Oscar nominees for Best Picture, too. I was honored to be asked to provide a Muriel blurb for the Coens' existential comedy, my favorite movie of the year. It goes something like this:

Schrödinger's (Cheshire) cat sits, grinning, atop the Coen Brothers' oeuvre, simultaneously dead and alive, like... well, like a cat. Like a cat in a box. Maybe it's the box Barton Fink carries to the beach. What's in it? You know, but you don't know. And the Coens aren't going to open it for you because that would be too obvious and, really, where would that get you? No, in order to appreciate the Coens' way of seeing you must be willing and able to hold two -- at least two -- contradictory realities in your head at the same time. Like an inevitable coin flip that's both heads and tails until it's called. Like a man chasing his hat. Like a failing grade that is also an unsatisfactory grade. Like mere sir my sir. Like... the parking lot. Or maybe not so much like the parking lot. Accept mystery.

Any good movie creates its own world. The Coens go beyond that. "A Serious Man" embodies an entire worldview -- a way of perceiving and appreciating (if not necessarily understanding) a moral and existential universe in Coen-esque terms (and Kafka-esque, too). It's a suburban Minneapolis Jewish world in the late 1960s, but it is a fully realized universe with ancient traditions and new freedoms, where to do nothing is to take action and there's nothing more certain than the uncertain. Every shot is in its place -- every pause, every gesture, every inflection, every frame is what it needs to be. Great movies don't have to be perfect movies (someone once said), but like "No Country for Old Men" and "Miller's Crossing," "A Serious Man" is both.

To this I would like to add a little something else from an off-topic comment (that somehow evolved in a thread about "Avatar") I wrote in reply to someone who said he thought the Coens mocked their characters (a criticism he did not think applied to Kubrick), and that "A Serious Man," "unlike with Job," was about "suffering for suffering's sake." I see it differently: 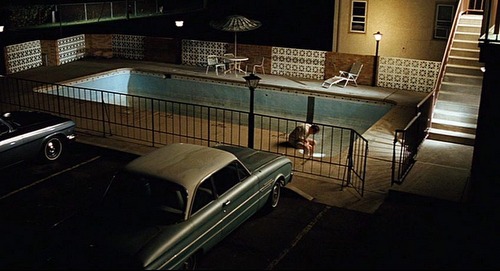 The criticisms you make of the Coens are exactly the ones that have long been made about Kubrick in "Lolita," "Dr. Strangelove," "Clockwork Orange," "Barry Lyndon," "The Shining," "Eyes Wide Shut"... The Standard View was/is that he was cold and godlike, treating his characters with scorn and derision. But satire, or "mocking," doesn't preclude empathy for the human condition. I'd argue that the story of Job is precisely about suffering for suffering's sake, though that's not the way it's usually interpreted by believers. The Coens take a more humanistic view, showing that inexplicable suffering exists (think of the beautiful, touching scene with brother Arthur by the empty Jolly Roger motel pool) -- and perhaps we shouldn't take it so personally by taking the blame on ourselves and feeling that God is punishing us. So, the Coens place the Job figure in a Kafkaesque world where, if Hashem exists at all, it's not as a personal god. I find that to be a rather humane view of the world.