There's a little back-and-forth between me and Glenn Kenny about this Oscar-nominated picture called "Avatar" over at MSN Movies. Good heavens, I wonder, what's all this fuss about? Maybe you're just a fogey, Glenn suggests. I say I wanted to visit a world of awesome mystery and wonder, and all I got was this velvet painting of a movie. Glenn says that he wanted a state-of-the-art "ass-kicking James Cameron science fiction action movie" -- and, for him, "Avatar" delivered on that score. 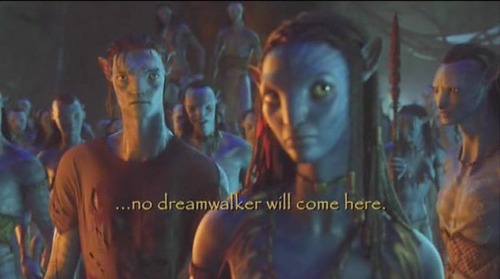 Me: What some see as mythic simplicity, I see as simplistic simplicity. Almost everything in "Avatar" is, as they say in studio development circles, "a little too on-the-nose." Like "The Dark Knight," its most recent popular predecessor, the movie simply announces what it's supposed to be about and then shows it to you. Life on Pandora isn't just interconnected in some metaphorical or metaphysical way; its subterranean neural pathways actually light up when you step on them. The movie accompanies the dialogue like a PowerPoint presentation illustrating a lecture.

Glenn: In Hollywood today, most directors' grasp of action grammar (hell, of film grammar in general) ranges from the crude to the illiterate. The '80s and '90s gave us just a few guys (and at least one woman) who knew how to fill a frame with exciting movement (what us critic types sometimes call "kineticism") and how to cut around and assemble those frames to create stirring, involving action. John McTiernan of the first "Die Hard" picture and "The Hunt for Red October" was one such director, one of the best. Another was Cameron, who added to that talent a flair for comic-book style composition and design. As I've noted before, elsewhere, so many instances in "Aliens" and even the non-sci-fi "Titanic" bring to this viewer's mind the epic double-page spreads of the great comic-book artist Jack Kirby. The sort of thing I still get a jolt from.

Good comments over at Glenn's place, too.