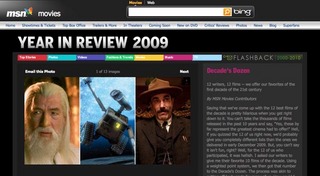 Saying that we've come up with the 12 best films of the decade is pretty hilarious when you get right down to it. You can't take the thousands of films released in the past 10 years and say, "Yes, these by far represent the greatest cinema had to offer!" Hell, if you quizzed the 12 of us right now, we'd probably give you completely different lists than the ones we delivered in early December 2009. But, you can't say it isn't fun, right?

This reminds me: How the hell did I manage to omit Laurent Cantet's 2001 "Time Out"? You can find the aggregate ballot results here, individual contributors' lists here.

MSN Movies: Best of the Decade:

That's a pretty mainstream list (hey, it's for MSN) -- and so is mine:

Rarely has the path of discovery from first image to final image been as convoluted and deeply mysterious as the one that winds through Michael Haneke's "Caché" (aka "Hidden"). The picture begins with a seemingly ordinary establishing shot: an exterior of a jumbled block of Parisian townhouses and apartments. Birdcalls echo through the streets and alleyways. The credits read out across the screen until they cover most of it (like one of Charles Crumb's later comics panels) and then they fade away, leaving us with that same image. What are we looking at? What are we looking for? A woman comes through a gate and walks out of the frame. A boy on a bicycle rides through. "Well?" says a man's off-screen voice. "Nothing," says a woman's. The scenario that initially emerges is straight out of David Lynch's "Lost Highway": a video tape (the one we've been watching) has been left here, in front of this flat occupied by Georges and Anne Laurent (Daniel Auteuil and Juliette Binoche) and their teenage son Pierrot. The tape, and childlike drawings featuring splashes of blood, hint at something terrible hidden in Georges' past, and that of France, as well. How much will be revealed? And what are we witnessing in that bedeviling final shot, a revelation so subtle some viewers actually missed seeing it, perhaps assuming the movie was over? Like many great movies, "Caché" teaches you how to watch it as you watch it, and the experience is riveting in part because it is not easily explained away. -- Jim Emerson