In the Sweet By and By

I have read many excellent articles and reviews about Roger and the documentary, "Life Itself," but this one by Matt Fagerholm (published first on his site, Indie Outlook) had such an elegantly elegiac feel, invoking memories of Roger, Robert Altman, Heath Ledger and Philip Seymour Hoffman, that the specter of Roger reading over my shoulder was intensified. I felt his presence. And when I told Matt about it, he said he felt Roger's presence when he was writing it. I don't doubt it. I know how much "Prairie Home Companion" and "Synecdoche New York," meant to Roger. And for Matt to write about "Life Itself" through the prism of those two particular films was both insightful and heartbreaking. Roger found a place of peace in those films, seeing "Prairie" as Robert Altman's farewell to the world, but not in a sad way, but in the manner of a man who is calling together all he loved for what must be the last time. And he reveled in the music. In Charlie Kaufman's "Synecdoche," Roger was getting a clear-eyed glimpse of what life must become for some who have to live in the burning house and not notice the fire. He named it the best film of the decade saying, "the surface may daunt you. The depths enfold you. The whole reveals itself, and then you may return to it like a talisman...The subject of "Synecdoche, New York" is nothing less than human life and how it works. Using a neurotic theater director from upstate New York, it encompasses every life and how it copes and fails. Think about it a little and, my god, it's about you. Whoever you are." And Matt's essay draws together all of those elements for a different take on "Life Itself," and what those films meant to Roger.

IN THE SWEET BY AND BY

"There’s a sense of elegy in the film. A sense that something wonderful is coming to an end, and the way to handle that is not to regret it, but to treasure the memories."

Roger Ebert said these words in June of 2006 while reviewing Robert Altman’s "A Prairie Home Companion" on "Ebert & Roeper." Later that month, he would undergo surgery to remove a cancerous tissue near his right jaw. This would lead to various complications rendering him unable to speak. He wouldn’t make a public appearance until the following year at Ebertfest. In between that time, Altman would pass away, bringing newfound poignance to his last film and its preoccupation with death.

Essentially a big-screen version of Garrison Keillor’s live radio variety show, the picture dramatizes a "what-if" scenario in which the program is cancelled and forced to deliver its final performance. A typically starry ensemble of exuberant thespians take their turns in the spotlight, crooning folksy tunes and cracking cheesy jokes before scurrying backstage to wistfully observe the action with glistening eyes. The tone of Keillor’s humor is an acquired taste, to be sure (I could understand Roeper’s aggravation with it), but the unbridled sweetness and charm of its cast ultimately won me over. The entire film feels like a labor of love celebrating life’s impermanent, fleeting and yet gloriously transformative joys that make every struggle worth the effort.

A few months before the film premiered (and, it would turn out, eight months before his death), Altman was awarded his only Oscar, an honorary accolade for career achievement. Rather than spit out an embittered "Thank you" before bolting from the mic (as Hitchcock memorably did), Altman gave a beautifully eloquent speech that served as a fitting final bow. It was preceded by a brilliant verbal duet performed by "Prairie Home Companion" stars Meryl Streep and Lily Tomlin that illustrated the director’s groundbreaking technique of naturalistic overlapping dialogue which revolutionized movie comedy, and cinema in general, in 1970’s "M*A*S*H." Altman said that he looked at the award as "a nod to all of my films because, to me, I’ve just made one long film." That perspective makes perfect sense, since his last film certainly functions as a worthy, heartfelt finale not only to a career but to a life lived to the hilt.

In his initial four-star review, Ebert hailed the film as "a memorial to memories of times gone by, to dreams that died but left the dreamers dreaming, to appreciating what you’ve had instead of insisting on more." He ends the review by quoting F. Scott Fitzgerald’s "The Great Gatsby," "And so we beat on, boats against the current, bourne back ceaselessly into the past," the very same prose that his longtime friend Bill Nack recited (as he so often did for Ebert) after the screening of "Life Itself" at Ebertfest this past April. When Ebert inducted "Prairie Home Companion" into his Great Movies series in 2008, he said that he saw the film in a wholly new light. "I unconsciously found myself picturing Altman as the host of the radio show, instead of Keillor … There are lines that may indeed have been written by Keillor, but take on a special meaning now that Altman is gone. One of them is, ‘Every show is your last show. That’s my philosophy.’ I can hear Altman saying that." I can hear Ebert saying that too. 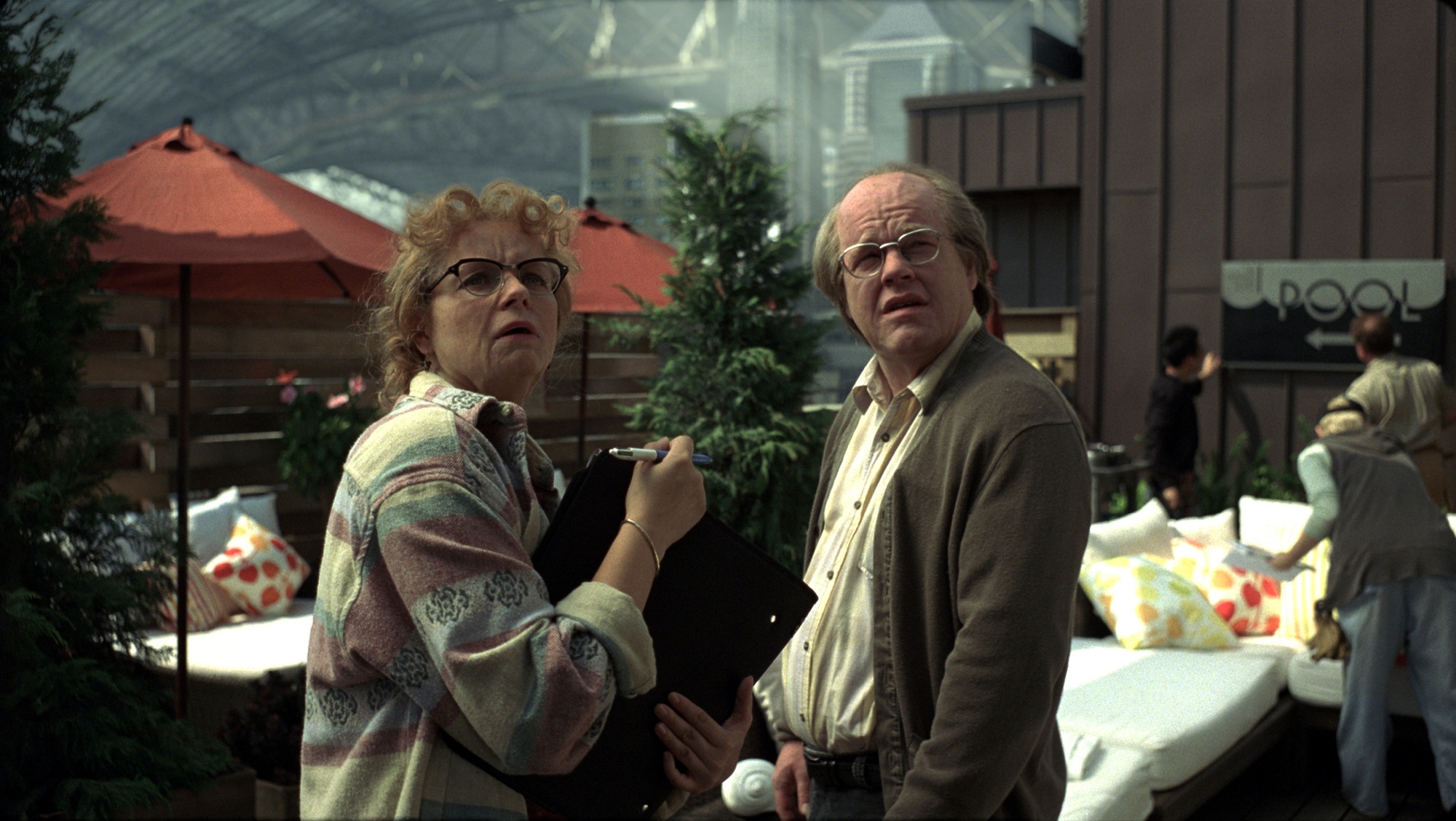 Throughout the footage of Altman’s Oscar speech, the camera cuts to a few other faces that are no longer with us, including Heath Ledger and Philip Seymour Hoffman, who were both nominated that night for Best Actor. Hoffman would go on to win for "Capote" and later star in Charlie Kaufman’s brilliant 2008 directorial debut, "Synecdoche, New York," which Ebert named the best film of the decade, writing, "Hoffman’s character experiences a deterioration of body, as we all do, finds it more difficult to see outside himself, as we all do, and becomes less sure of who ‘himself’ is, as sooner or later we all do" (and as Ebert did in his final years). That film also dealt unflinchingly with death and the potential that our mortal limitations are doomed never to realize. Just as Altman’s spirit haunts "Prairie Home Companion," Hoffman’s haunts "Synecdoche." For me, Ebert’s spirit haunts both to such a degree that I can’t watch a single frame of them without instantly thinking of him.

Hoffman was, of course, the legendary critic’s ideal actor to star in a Roger Ebert biopic, and in an ideal afterlife, that film is screening to rousing applause. I think Altman would be the best choice to direct it. In late 2004, Altman directed a stage adaptation of his 1978 film, "A Wedding," at Chicago’s Lyric Opera. Ebert recalls this in his Great Movies article: "[Altman] knew his time was limited. ‘Where the years have gone, I don’t know,’ he told me backstage that day at the Lyric. ‘But they’re gone. I used to look for a decade. Now I look for a couple more years.’ He got them." So did Ebert. The final act of his extraordinary life was an inspiration to all who witnessed it. His refusal to be lionized as an airbrushed icon was the reason why his readers grew so close to him. He hated phoniness as much as Altman did, and allowed people to see the reality of his illness because he wanted to universalize it, removing its societally imposed stigma. That’s what Ebert believed great art could do, and that’s precisely what Steve James’ documentary does so indelibly.

During the time Altman was directing his opera, he was honored by the Chicago Film Critics Association. I was there that night, a freshman at Columbia bursting with excitement and anxious adrenaline. I’ll never forget watching Ebert beaming from ear to ear as he guided the somewhat frail yet still indomitable Altman into the room. Later in the evening, I ended up shaking hands with both of them. Ebert told me that he used to teach film at Columbia, and I immediately wished that I had been a fly on the wall in his class. Altman held my hand in a vice grip as I told him what an inspiration his films had been to me ("McCabe & Mrs. Miller," "Nashville," "The Player," hell, even "Popeye"), and he replied, "Thanks son, that’s nice to hear." Hard to believe that was ten years ago. It feels like yesterday. Now I know how Hoffman’s character feels in "Synecdoche."

Watching Altman’s speech again, I’m struck by how similar it is to Ebert’s own "curtain call," "A Leave of Presence," his final article published two days before his death. Both men never had any intention to fade away. They were always forging ahead tirelessly in their work with primal passion. Altman had two films in pre-production when he died, and Ebert had several projects in development, some of which I am now honored to help realize. When Altman says he has many years left and Ebert says, "I’ll see you at the movies," this is not fanciful optimism. It is a fact, pure and simple. The overwhelming legacy of these two giants will remain eternally alive and well in the minds and hearts of those moviegoers who cherish truth devoid of artifice.

It’s clear that the music of Altman’s "Prairie Home Companion" touched Ebert very deeply, particularly the song, "Red River Valley," which the cast sings in the last moments of their last show before breaking out into a spirited rendition of "In the Sweet By and By" over the end credits. Of "Red River Valley," Ebert wrote: "When I heard it for the first time around a campfire at a summer camp when I was about 9, I knew I would feel that way about it all of my life." It’s a song of unrequited love sung by a man to a woman who captured his heart, didn’t return his affection and is about to leave forever. It’s a song of loss and of gratitude, of savoring the light before it vanishes, of life itself.

"Come and sit by my side if you love me

Do not hasten to bid me adieu

But remember the Red River Valley

And the one who has loved you so true."

"Life Itself," the documentary on Ebert directed by Steve James, is now playing at Chicago’s Landmark Century Centre Cinema and is also available at the following venues/platforms listed here.