One of Robert Altman's trademarks is the way he creates whole new worlds in his movies -- worlds where we somehow don't believe that life ends at the edge of the screen, worlds in which the main characters are surrounded by other people plunging ahead at the business of living. That gift for populating new places is one of the richest treasures in "Popeye," Altman's musical comedy. He takes one of the most artificial and limiting of art forms -- the comic strip -- and raises it to the level of high comedy and high spirits.

And yet "Popeye" nevertheless remains true to its origin on the comic page, and in those classic cartoons by Max Fleischer. A review of this film almost has to start with the work of Wolf Kroeger, the production designer, who created an astonishingly detailed and rich set on the movie's Malta locations. Most of the action takes place in a ramshackle fishing hamlet -- "Sweethaven" -- where the streets run at crazy angles up the hillsides, and the rooming houses and saloons lean together dangerously.

Sweethaven has been populated by actors who look, or are made to look, so much like their funny-page originals that it's hardly even jarring that they're not cartoons. Audiences immediately notice the immense forearms on Robin Williams, who plays Popeye; they're big, brawny, and completely convincing. But so is Williams's perpetual squint and his lopsided smile. Shelley Duvall, the star of so many other Altman films, is perfect here as Olive Oyl, the role she was born to play. She brings to Olive a certain ... dignity, you might say. She's not lightly scorned, and although she may tear apart a room in an unsuccessful attempt to open the curtains, she is fearless in the face of her terrifying fiancé, Bluto. The list continues: Paul Smith (the torturer in "Midnight Express") looks ferociously Bluto-like, and Paul Dooley (the father in "Breaking Away") is a perfect Wimpy, forever curiously sniffing a hamburger with a connoisseur's fanatic passion. Even the little baby, Swee' Pea, played by Altman's grandson, Wesley Ivan Hurt, looks like typecasting.

But it's not enough that the characters and the locations look their parts. Altman has breathed life into this material, and he hasn't done it by pretending it's camp, either. He organizes a screenful of activity, so carefully choreographed that it's a delight, for example to watch the moves as the guests in Olive's rooming house make stabs at the plates of food on the table.

There are several set pieces. One involves Popeye's arrival at Sweethaven, another a stop on his lonely quest for his long-lost father. Another is the big wedding day for Bluto and Olive Oyl, with Olive among the missing and Bluto's temper growing until steam jets from his ears. There is the excursion to the amusement pier, and the melee at the dinner table, and the revelation of the true identity of a mysterious admiral, and the kidnapping of Swee' Pea, and then the kidnapping of Olive Oyl and her subsequent wrestling match with a savage octopus.

The movie's songs, by Harry Nilsson, fit into all of this quite effortlessly. Instead of having everything come to a halt for the musical set pieces, Altman stitches them into the fabric. Robin Williams sings Popeye's anthem, "I Yam What I Yam" with a growling old sea dog's stubbornness. Bluto's "I'm Mean" has an undeniable conviction, and so does Olive Oyl's song to Bluto, "He's Large." Shelley Duvall's performance as Olive Oyl also benefits from the amazingly ungainly walking style she brings to the movie.

"Popeye," then, is lots of fun. It suggests that it is possible to take the broad strokes of a comic strip and turn them into sophisticated entertainment. What's needed is the right attitude toward the material. If Altman and his people had been the slightest bit condescending toward "Popeye," the movie might have crash-landed. But it's clear that this movie has an affection for "Popeye," and so much regard for the sailor man that it even bothers to reveal the real truth about his opinion of spinach. 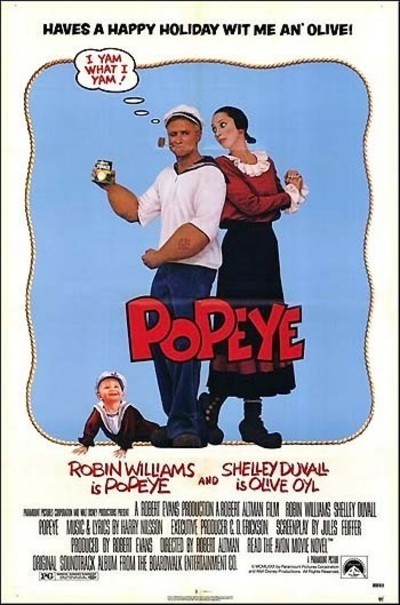