Days of Ebertfest: The 2013 schedule

PRESS RELEASE: CHAMPAIGN, Ill. -- Terrence Malick's 1978 film "Days of Heaven" won an Oscar for best cinematography, and Roger Ebert likely found that no surprise. It is "above all one of the most beautiful films ever made," Ebert said in a 1997 review. So it's only appropriate that the film will open the 15th annual Roger Ebert's Film Festival on April 17 in the big-screen, newly renovated Virginia Theater in downtown Champaign.

Also among the 12 features and two shorts to be screened during the five-day "Ebertfest" -- running through April 21 at the Virginia and at the University of Illinois -- will be a kabuki-inspired drama from Japan; a recent silent film from Spain that deserved as much attention as "The Artist," according to Ebert; a sympathetic take on the "mad" painter Vincent Van Gogh, directed by frequent festival guest Paul Cox; and a documentary, which will close the festival, about veterans overcoming their wounds through fly-fishing on a Montana ranch.

Oscar-winner Tilda Swinton was a guest for the 2011 Ebertfest and returns this year with the crime thriller "Julia," in which she plays the title role of an unlikable "tough broad who is in way over her head," according to Ebert. Jack Black will be a guest with a very different crime story, "Bernie," in which he plays the title role of a funeral director who everyone likes but who has something to hide.

Other festival guests will include most of the films' directors, along with others connected with the films -- among them a U. of I. alumnus.

As usual, all the festival films will be screened at the 1,500-seat Virginia Theater, a 1920s-era movie palace, with other events (to be announced later) at the U. of I.

Since last year's festival, extensive work at the theater has brought in all new seating, extensive plaster repair and painting, installation of an elevator and other accessibility features, along with other improvements.

This year's schedule of films, with the current lineup of guests (Ebert's comments are from past reviews or his online journal): 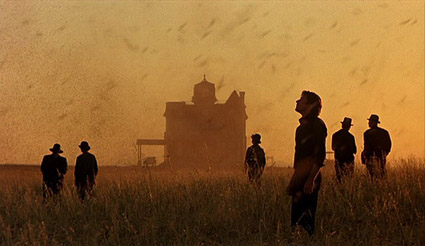 7 p.m. -- "Days of Heaven" (1978), a drama that takes place in the years before World War I on the Texas prairie, in which a farmhand convinces the woman he loves to marry a rich farmer who appears to be dying. Told from the perspective of the farmhand's teenage kid sister, it features Brooke Adams, Richard Gere and Sam Shepard. Haskell Wexler, an uncredited director of photography for the film, will be a guest. Credited Director of Photography Néstor Almendros won an Oscar for the film.

Before the film will be the short "I Remember" (2012), with director Grace Wang as a guest. 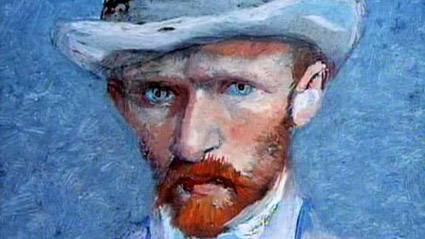 1 p.m. -- "Vincent: The Life and Death of Vincent Van Gogh" (1987), a film that takes the viewer inside the life and work of Van Gogh, based on hundreds of letters the painter wrote to his brother. The director Paul Cox "adopts the role of a disciple of the painter," says Ebert, exploring Van Gogh's technique even down to the brushstroke at times, and portraying the painter as a "poetic, thoughtful man ... open to the full range of his experience." Cox will be a guest.

Before the film will be the short "To Music" (2013), with co-directors Sophie Kohn and Feike Santbergen and actor Paul Cox as guests. 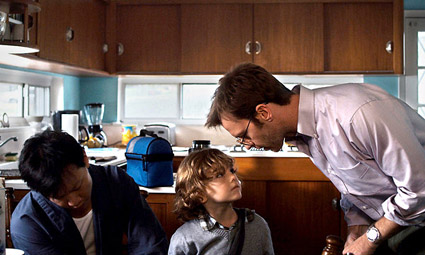 4 p.m. -- "In the Family" (2012), a drama essentially about a father and son being separated against their wishes, according to Ebert, though the story is more complicated than that. The film "tells a quiet, firm, deeply humanist story about doing the right thing." First-time director Patrick Wang, who also wrote the screenplay and gives an "extraordinary performance" as the father, will be a guest. 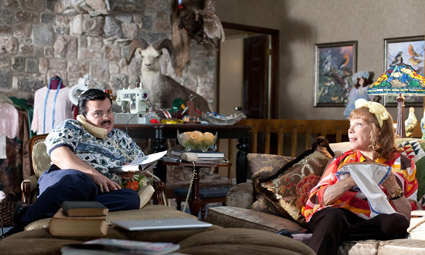 9 p.m. -- "Bernie" (2011), a droll comedy based on a true story in Carthage, Texas, in which a much-liked funeral director befriends a much-older and much-disliked rich widow, before things turn sour. Jack Black plays the title role, giving "one of the performances of the year," says Ebert, with Shirley MacLaine as the widow. Black and director Richard Linklater will be guests. 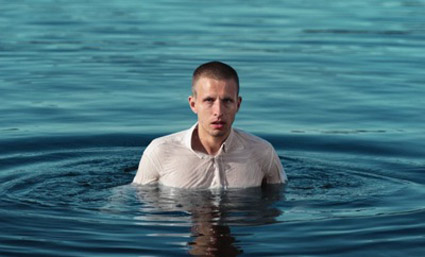 1 p.m. -- "Oslo, August 31st" (2011), a Norwegian film about a day in the life of a drug addict struggling to stay clean and sober, and feeling that life has moved on without him. It is "quietly, profoundly, one of the most observant and sympathetic films I've seen," Ebert says. Director Joachim Trier will be a guest.

4 p.m. -- "The Ballad of Narayama" (1958), a Japanese film "of great beauty and elegant artifice, telling a story of startling cruelty," Ebert says. That cruelty involves a village and its tradition of carrying those who have reached the age of 70 up a mountain and leaving them there to die. Presented in the style of kabuki theater, and structured around song and dance, it centers on the relationship between an elderly mother and her son. Film historian David Bordwell will be a guest. 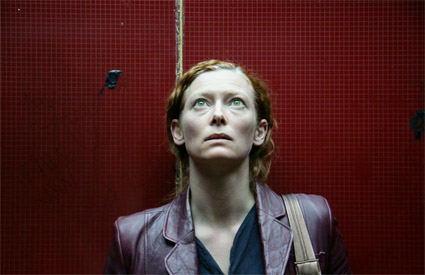 8:30 p.m. -- "Julia" (2008), "one doozy of a great thriller," Ebert says, in which Tilda Swinton is "amazing." She plays an unlikable woman in search of a big score, on a "nightmare journey through a thicket of people you do not want to meet," at the same time protecting a young boy. Swinton will be a guest. 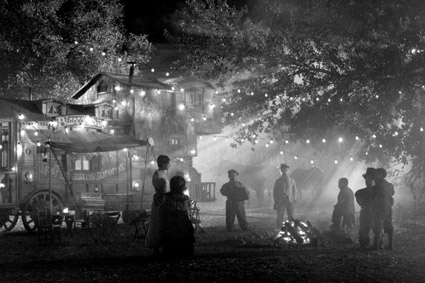 11 a.m. -- "Blancanieves" (2012), "a visually stunning" silent film from Spain, accompanied by a "full-throated romantic score," whose story draws on the Brothers Grimm and Snow White and yet "is anything but a children's film," Ebert says. The plot revolves around the daughter of a famous matador who eventually becomes a matador herself. Director Pablo Berger will be a guest. 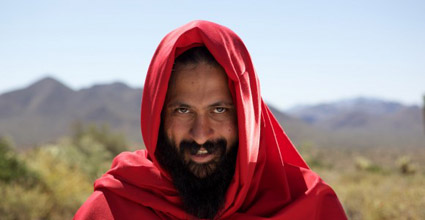 2 p.m. -- "Kumare" (2011), a documentary that follows filmmaker Vikram Gandhi, raised in New Jersey in a Hindu family, as he sets himself up as a guru in Arizona and begins to attract followers. The film is not satirical or snarky, as one might expert, Ebert says, and "seems to establish that a guru can be a complete fraud and nevertheless do a certain amount of good." Gandhi and executive producer Stephen Feder, a U. of I. media studies graduate, will be guests. 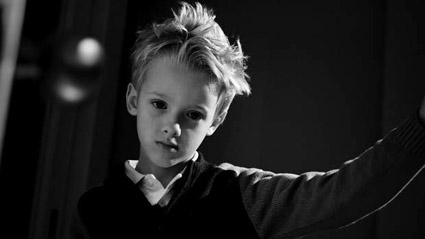 5 p.m. -- "Escape From Tomorrow" (2013), a fantasy/drama and "fun paranoia ride ... about the terror of ubiquitous entertainment," says reviewer Michał Oleszczyk. Shot guerrilla-style almost entirely at Disney World, the film revolves around a father who becomes obsessed with a couple of sexy French tourists and then "gets caught up in the dark underside of the surrounding kingdom." The film premiered at the Sundance Film Festival in January. Director Randy Moore and producer/editor Soogin Chung will be guests. 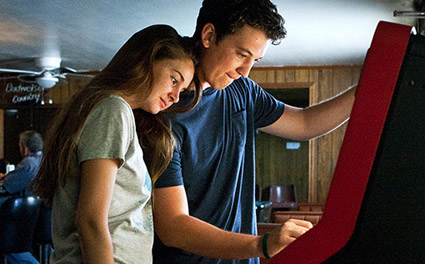 9 p.m. -- "The Spectacular Now" (2013), a comedy/drama about a high school boy and girl and their developing relationship, which also premiered at the recent Sundance. Its characters "look, speak and feel like real 18-year-old middle-American human beings," which is rare for a film about high-school romance, Ebert says. Director James Ponsoldt will be a guest. 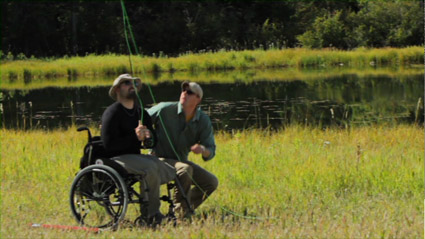 Noon -- "Not Yet Begun to Fight" (2012), a documentary about men of broken body and soul and their therapy through fly-fishing on a Montana ranch. The men are wounded veterans participating in a group called "Warriors and Quiet Waters." Guests will include the producer/co-director Sabrina Lee, the co-director and editor Shasta Grenier, and film subjects Erik Goodge and Elliott Miller.

The schedule also can be found at ebertfest.com, complete with Ebert's reviews, information about other events, and a video retrospective from last year's festival. Also available on the website at the time of the event will be live streaming of panel discussions and the post-film Q-and-A sessions at the Virginia Theater.

The festival is an event of the College of Media at Illinois. Additional support is provided by the Champaign County Anti-Stigma Alliance, sponsoring "In the Family"; Steak 'n Shake, sponsoring "Blancanieves," and The Academy of Motion Picture Arts and Sciences.

Ebert is a Pulitzer Prize-winning critic for the Chicago Sun-Times and co-hosted "Ebert & Roeper," a weekly televised movie-review program, until 2006. He also produced and contributed to "Ebert Presents at the Movies," which ran through 2011.

Ebert is a 1964 Illinois journalism graduate and adjunct journalism professor.

Ebert selects films for the festival that he feels have been overlooked in some way, either by critics, distributors or audiences, or because they come from overlooked genres or formats, such as documentaries. (The festival previously was called "Roger Ebert's Overlooked Film Festival." It was renamed in 2008.)

Guests connected with the selected films appear on stage for informal Q-and-A sessions after the screenings. Also attending and participating in panel discussions will be members of Ebert's "far flung correspondents," a group of film commentators from all over the world who regularly contribute to his online journal.

As in recent festivals, Ebert's wife, Chaz, will act as the emcee. Ebert will play a role through his computer-assisted voice.

The 1,000 festival passes, covering all festival screenings, went on sale in November and usually sell out -- though a few remain available.

Even if tickets for individual films are sold out, entrance can usually be obtained by waiting in a designated line that forms outside the theater prior to each screening.

More details about this year's festival, films and guests can be found at the official Ebertfest site.