The first few jump scares seem to set the tone for the cheesy but fun ghost story "Winchester." These eye-roll-inducing shocks bring to mind the humor in the films of horror-comedy gods Peter Jackson and Sam Raimi, both of whom infuse slapstick humor into otherwise by-the-number shock scares. Still, it's hard to know if you're supposed to laugh at the first few ghosts that appear in "Winchester," a period film set in a haunted San Jose mansion just before the Great Earthquake of 1906. The finger that suddenly appears out of a hole in the wall? Or the kid armed with a pitchfork? Or how about that one stray roller skate? Are any of these things supposed to be funny?

Most signs initially point to "yes." Brotherly director duo Michael and Peter Spierig ("Predestination," "Daybreakers") and their co-writer Tom Vaughan leave many suspicious little bread crumbs throughout laudanum-addicted psychiatrist Eric Price's (Jason Clarke) investigation into the sanity of Winchester rifle heiress Sarah Winchester (Helen Mirren). Maybe you see the signs, too: a familiar face here, a telling coincidence there, or just the generally peculiar (and forceful) reversal of expected roles between Eric's doctor and Sarah's patient. Regardless of how actively disoriented you are by them: the first few jump scares are fittingly misleading. They suggest you're either about to see a tongue-in-cheek, or earnestly dumb cash-in on the post-"Insidious"/"The Conjuring" trend of jump-scare-intensive, sub-"Poltergiest III" haunted house films. Thankfully, while "Winchester" is definitely trashy and fairly dumb, the Spierigs are also sincere and technically accomplished enough to lean into their story's tackiest elements and carry them off with gusto.

Like "The Exorcist" before it, "Winchester" follows a head-shrinker of little faith who eventually abandons his doubts and embraces his latent superstitions. Unlike "The Exorcist," "Winchester" is completely corny. Case in point: Eric lost his wife under mysterious circumstances and now literally carries that baggage with him everywhere in the form of a rifle cartridge he engraved with the words "Together Forever." Eric's past is a weakness that Sarah and her otherworldly tormentors prey upon. But it's nothing compared to Sarah's preposterous but almost true backstory: she's using a $20 million inheritance to build a house whose design is dictated to her whenever she's possessed by visiting spirits at the stroke of midnight. Each new room in the Winchester mansion is made to look just like the room where the next random visiting ghost died. Unfortunately, the Winchester company thinks Sarah is too crazy to continue being their leader, and now want a doctor to confirm what they already know.

While "Winchester" is loosely based on a true story, the film is never too close to reality. Eric ultimately must resolve his residual dead-wife-related guilt if he's going to overcome his skepticism about Sarah's ghost situation. This suggests that the only surprise "Winchester" holds for viewers is waiting to see whether the Spierigs and Vaughan will attempt an elaborate twist ending, as the screenwriters of "Jigsaw," the Spierigs' last film, did, or just confirm what you probably already know about Sarah's paranormal situation. The cynic in me repeatedly wondered: is Sarah lying because the filmmakers are nuts, or is she telling the truth because they're that creatively bankrupt?

Thankfully, "Winchester" leveled my unfair expectations simply by being silly and fun. Most of the film is genuinely atmospheric, thanks especially to the omnipresent construction noises (hammers on chisels, saws through planks) that surround the house. And there are some well-choreographed setpieces, particularly the one where a rifle slowly but surely fires right next to Mirren's head. Clarke gives one of his best performances to date, and even the expository dialogue is florid enough to be enjoyable. Finally: who could resist an eccentrically baroque haunted house brought to life without computer-generated imagery? What "Winchester" lacks in originality its creators make up for in execution. 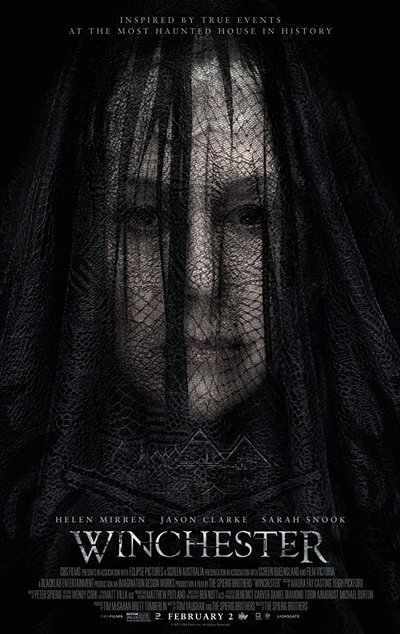