From "Saw" to "Insidious," indie horror filmmaker James Wan's films have always been confrontational in their guileless grand-standing. So it's not surprising that watching "The Conjuring" is like getting a tour of a haunted house attraction from someone that pushes, and pulls you through every room.

There's nothing really scary about Wan's latest because there's nothing particularly mysterious, or inviting about its proceedings. The film's relentlessly lame expository dialogue and tedious parade of jump scares are overwhelming in the worst way possible. Only one in five scares hit home because, while Wan sometimes proves that he can reel viewers in, he usually prefers to strong-arm his audience into submission. Then again, the film's scenario, scripted by Carey and Chad Hayes (the 2005 "House of Wax" remake), is so thunderously stupid that you probably wouldn't want to wander around Wan's film-shaped carnival ride if you could.

"The Conjuring" is as toothless as it is because it's two different kinds of boring. The film's plot is explained exhaustively whenever loud noises aren't blaring, and random objects aren't teasingly leaping out at you from the corner of your eye. In fact, the Hayes' brothers are so anxious to explain their "Amityville Horror"-knockoff's convoluted backstory that they dump information in viewers' laps three different ways before the film's opening credits.

First, there's a dramatization of the 1968 Annabelle Higgins case, a real-life "haunting" that apparently involved a creepy doll, and two dimwitted nubile nurses. Next, Ed and Lorraine Warren (Patrick Wilson and Vera Farmiga) explain to a rapt collegiate audience that they're demonologists who specialize in exorcisms. It's never explicitly explained in the film, but in real life, the Warrens "investigated" the Amityville Horror hoax. Finally, a ream of text assaults your eyeballs with even more useless information. This movie is set in the early '70s, is "based on the true story," and follows the most serious exorcism case in the Warrens' history. And if you don't believe the filmmakers, too bad, braaaahm, here's the movie's title in huge, bigger-than-Kubrick yellow font; don't choke on it.

That kind of incessant throat-clearing continues after we're introduced to the Perrons, a family with five young daughters who just moved into a big house on the edge of a small Massachusetts town. We learn something new about the Perrons and the Warrens in every other scene because they never stop describing themselves to each other. The girls are rambunctious, and miss their old home: "Well, first cute boy she meets, she'll forget about Jersey."

The Perrons' house needs cleaning up: "Whoa! That's gonna take a lot of elbow grease!" The Warrens are God-fearing, and happily married: "You said that God brought us together for a reason." And while there are three stages to a haunting ("Infestation, Oppression, Possession"), the Perrons' new house isn't haunted—they are ("It's like stepping on gum: sometimes you take it with you").

Don't let the Hayes' diarrhetic explanations put you off: you can ignore much of what's being said and understand "The Conjuring" just fine. But a key reason that the film's barrage of jump scares is as dissatisfying as it is is because the Hayes' scenario is distressingly light on intelligent characterizations, memorable dialogue, logic. One might argue that there wouldn't be much of a movie if characters didn't make stupid decisions. But it takes a special kind of rocket scientist to enter a room after seeing a ghost with slit wrists whisper (loudly), "Look what she made me do," then disappear around a corner.

This is a movie where two characters, after experiencing a major traumatic event, express affection for each other by saying, "You did good," and, "No, you did." Hokey period details, like Wilson's Elvis-like flip haircut and sideburns, or Farmiga's Liberace-style collar ruffles, are meant to lull viewers into complacency. But that kind of bait-and-switch tactic is just annoying in a horror film whose monsters are only as scary as they are fitfully unnerving.

The fact that so many pseudo-spooky scenes in "The Conjuring" involve jump scares is telling. Wan and the Hayes want their film to be judged as a theme park attraction. But they fail to deliver bargain-basement cheap thrills. Even if you ignored the parts of "The Conjuring" that require more than shock-deep emotional involvement, the film's scares are too monotonous and schematic to be really scary. Wan and the Hayes only plumbed their ids so much, and consequently only have to offer a creepy doll, a screaming old crone, and dead kids in period dress. These things aren't that much scarier when they're flying into your face. There's nothing holding "The Conjuring" together beyond its creators' desperate need to needle you. 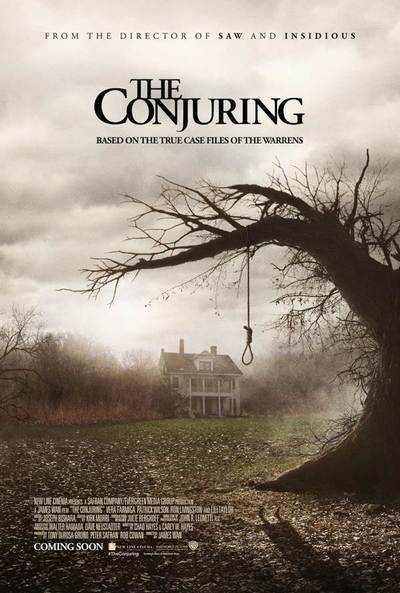