The mind reels at the thought of trying to review "Predestination." Not that it is bad, mind you—in fact, it is really, really impressive and well worth venturing out to find despite the crummy January weather (those in especially intemperate areas will be relieved to find that it is on VOD as well)—but because this is one of those films that is so filled with twists, turns and unexpected developments that even the most oblique plot discussion threatens to wander into dreaded spoiler territory. Then again, I admit that I knew pretty much everything that was going to happen going in thanks to my familiarity with the source material, Robert Heinlein's celebrated 1959 short story "—All You Zombies—," and still found myself knocked out by its startlingly effective translation from the page to the screen. I will try to keep the details to a minimum, but, trust me, the less you know going in, the better, especially considering the fact that the story deals in no small part with time travel (and all of the attending paradoxes) and that is not even close to being its most unusual aspect.

As it turns out, there are such things as Temporal Agents, an elite group of people charged with traveling through time in order to prevent horrible crimes before they occur. As the film opens, one such agent is trying to disarm the latest deadly explosive set by the Fizzle Bomber, a terrorist wreaking havoc on Seventies-era New York when it goes off in his face, burning him badly in the process. He manages to return to headquarters and after massive plastic surgery and a long recuperation process, he recovers and now looks like Ethan Hawke in the bargain. Returning to New York in the hopes of catching the Fizzle Bomber, he is working as a bartender when he strikes up a conversation with a slightly androgynous-looking guy who calls himself "The Unmarried Mother"—he makes his living writing fake tales of woe for so-called "confession" magazines—and who promises to tell "the best story that you ever heard," a saga that begins in 1945 when she was left on the steps of an orphanage as an infant.

Yes, "she" for, as it turns out, he started life as a girl named Jane. Growing up in the orphanage, Jane (eventually played as an adult by Sarah Snook) was relentlessly picked on by her peers for being different but proved to be smart as a whip, surprisingly strong and filled with determination. These qualities, not to mention the retention of her virginity, prove to be of interest to SpaceCorp, a Sixties-era government agency charged with recruiting women to go into space to provide relief, as it were, for astronauts on long missions. Alas, after a fight, she is kicked out of SpaceCorp, but one of the people in charge, the enigmatic Mr. Robertson (Noah Taylor), continues to find her of interest. Around this time, though, Jane meets a mysterious man and falls in love but is crushed when he vanishes, leaving her pregnant and alone. While delivering her child, another unanticipated discovery is made that will change her life forever, among other things. But I have already divulged far more than I probably should have, even though I have not even come close to getting to the truly wild stuff yet.

So what can I talk about? For starters, there is the impressive job that the Australian writing-directing team of brothers Peter and Michael Spierig have done in bringing Heinlein's story, which he claimed to have written in a day, to life. Sticking fairly close to the source material for the most part, they have figured out a way of recounting it in a way that is straightforward enough for most attentive viewers to follow and yet complex enough to inspire them to want to go back and watch it again. (Here is where the VOD option might be helpful.) As for the time travel aspect, "Predestination" follows the lead of some of the best films of its type (a short list including the likes of "Time After Time," "Back to the Future II," "Primer" and "Looper") by embracing the potential paradoxes rather than trying to ignore or explain them away—the results are utterly preposterous, of course, but in a manner more entertaining than annoying. (The only time the narrative steps wrong is towards the end, mostly involving material invented solely for the film, and even then, these are flaws born of ambition rather than laziness.) From a stylistic standpoint, it also impresses in the way that it evokes the look and feel of the various eras that it touches on via clever costumes, production design and cinematography rather than through lavish special effects.

At the heart of "Predestination," however, are the two central performances by Ethan Hawke and Sarah Snook that bring genuine emotional weight to a storyline that could have easily plunged into utter nonsense. Hawke, for example, is an actor who in recent years has more often than not been gravitating towards material that is off-beat and original—at this point, his name on a marquee pretty much guarantees that the film in question will at least be somewhat interesting. Even though he is more or less playing the straight man this time around, he still clearly recognizes a juicy story when he sees it (as he did with his previous collaboration with the Spierigs, the better-than-average vampire saga "Daybreakers") and gives real life to a character that could have easily blended into the woodwork in other hands.

As the heart of the story, however, Sarah Snook delivers a knockout performance that calls on her to perform the kind of tricky scenes that could have resulted in bad laughs throughout if handled incorrectly. Not only does she pull off her performance brilliantly throughout—there is not one moment in which she is anything less that utterly convincing and believable—I would go so far as to put her work here up against any of the current front-runners for the Best Actress Oscar. If you have never heard of her before, it probably means that you are one of the many who didn't see her in "Jessabelle," a dopey horror movie that came and went last fall. In that film, she was by far the best thing on display in a very bad movie. Here, she is the best thing on display in a very good one. It's about time. 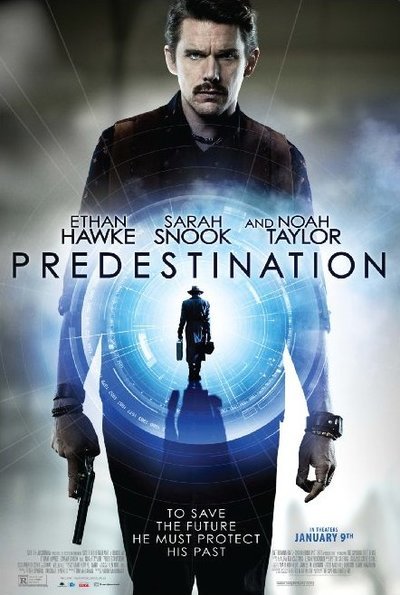 Ethan Hawke as The Bartender

Sarah Snook as The Unmarried Mother