I confess, I find the gory "Saw" movies' ridiculously severe approach to dramaturgy to be endearingly preposterous. Imagine a dimwitted Agatha Christie-style whodunit where a killer has trapped a room-full of victims in a single location. Stop laughing, Christie's "Ten Little Indians" is spot-checked in several scenes of "Jigsaw," the latest film in the undying horror-mystery series: a handful of victims claimed by serial killer John "Jigsaw" Kramer (franchise staple Tobin Bell) are discovered with index cards on their bodies that read "And then there were [Insert dwindling number of corpses here]." Jigsaw imagines that he has the moral high ground and is, with each heavily booby-trapped endurance "test," balancing the scales of divine justice by allowing criminals to either confess their sins, or suffer the consequences. Now throw in a lot of ineptly sensationalistic filmmaking, specifically too-dark camera filters, over-edited action sequences, and heavy-handed monologues about how people don't really appreciate life until they've almost died. Then include, on top of that, a bunch of rug-pulling twists, and seven sequels' worth of backstory, related primarily through abrupt flashbacks, and unwieldy expository dialogue. And voila, you have a screw-up-proof recipe for a bunch of abnormally dimwitted grand guignol-style thrillers, all of which are built on a narrative foundation of wobbly, retroactively planned mythmaking. These movies are so overdone that you can't help but marvel at their creators' aggressive, and clueless attempts at simultaneously alienating you and drawing you in.

Enter "Jigsaw," the seventh sequel, and a prime example of the "Saw" series' delightful over-seriousness. In "Jigsaw," you get two competing storylines: one is a locked room mystery set in an undisclosed barn, and the other is a police investigation of those farmyard slayings. Let's start with the story set in a barn. This plotline is superficially different from the kind you'll find in a typical "Saw" move in one superficial but notable way: it's not as sadistic. The earlier films had a more pronounced fixation on the breaking of bones, the helpless look on victims' faces, and the squishy, fireworks-style explosions that attend the human body's complete evisceration. But "Jigsaw" features "tests" that are relatively humane, though ultimately no less gruesome. "Jigsaw" still treats audiences to a grisly marathon wherein unwilling competitors are told that they must confess their crimes, or be punished by the pitfalls built into mean-spirited, sub-"Fear Factor"-style obstacle courses. All you, the reader, need to know: a group of strangers have been kidnapped, and now must admit to committing crimes that only Jigsaw knows about. Unfortunately, nobody wants to confess their sins...not even at the point of dying.

All of the above-mentioned death traps are either set into motion by haphazard physical movements, or hyped up to the point where their actual tame-ness is the real attraction. Think of what you expect versus what you enjoy about a carnival's haunted house attraction. You enter hoping to be sincerely frightened, and leave laughing gratefully at all of the inexplicable, pseudo-macabre details. The goofy actors! The cheap costumes! The distracting curtains!

Watching and enjoying "Jigsaw" isn't that different. Some traps are spectacularly lazy, like the one where victims are trapped in a grain silo, buried in (you guessed it) grain, and then slowly pelted with various yard tools and workbench implements, like a table-saw blade, some long nails, and even a pitchfork. Other traps can't be taken seriously because you can't figure out how they test contestants' morals or will to live, like when one meat puppet protagonist is fittingly lowered into a meat-grinder-style contraption, and has to fold his arms long enough to pull a handle. All of Jigsaw's traps feature confounding pressure points (Don't step there!), lazy solutions (Don't shoot that!), and glaringly obvious riddle-style word-play (Don't ignore that sentence's literal meaning!).

These death-trap kill scenes are enjoyable if you like going to a movie theater, and yelling at the screen. Yes, the forgettable characters' sheer stupidity and unpleasantness will test you. And yes, the pile-on nature of their secret sins will make you laugh. And yes, the sheer absurdity of the protagonists' shared plight will make you frequently want to tear your hair out. Any one of these elements might make watching "Jigsaw" a chore.

But all of these creative obstructions in one film make might also make watching "Jigsaw" a viewing experience that's so silly, and anxiety-inducing that you may also have a good time. Use the buddy system: go with somebody who also sincerely likes cheesy movies, and try to anticipate the next obvious twist together. Laugh with your friends in the audience as you all cringe, and lament the filmmakers' blessed lack of subtlety. Just don't watch this movie at home months after its theatrical release. See "Jigsaw" with a crowd of strangers, preferably on opening weekend, so that you can enjoy being confused, enraged, and baffled together.

Oh, and I bet you thought I forgot about the detective sub-plot. Rest assured, it's a doozy. After a number of red herring solutions are floated by viewers, the police stumble upon a twist that is not only dumb unto itself, but is also largely plagiarized from an earlier "Saw" sequel, and hilariously justified in a ten-minute info dump of expository dialogue at the film's end. You will hate "Jigsaw" if you approach it like a regular puzzle, and go in expecting its creators to give you enough pieces to complete their already corny puzzle without some amount of creative overcompensating. But, while I can't exactly recommend seeing "Jigsaw," I can tell you that it's fun to watch. I just don't think it's the kind of fun the filmmakers' planned. 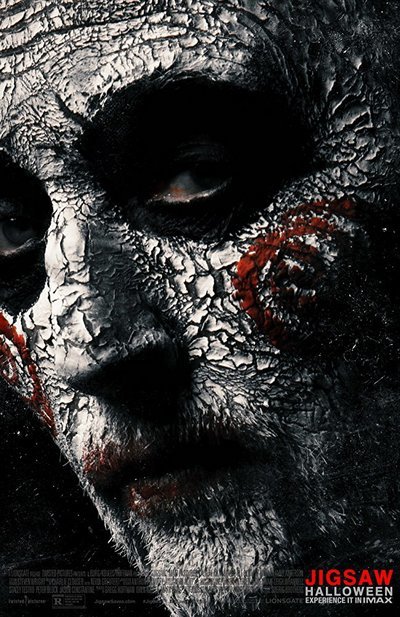 Rated R for sequences of grisly bloody violence and torture, and for language.