“Willy’s Wonderland” feels like a movie conceived during a drinking game. A few people had a few too many after a few rough days and dared each other to come up with the most ridiculous concept they could get produced. The winners of this game were G.O. Parsons and Kevin Lewis, the writer and director, respectively, of a movie that seems like it is too inherently fun to fail. Imagine the video game “Five Nights at Freddy’s” had an angry Nicolas Cage in it, causing mayhem and destruction. And then we’ll throw in some characters and tonal choices that recall ‘80s classics like “Friday the 13th” and “A Nightmare on Elm Street” (well, the sequels more than the originals). Sounds great, right?!?! What could go wrong? So much. So much could go wrong.

One thing that could go wrong is if you choose the Cage Rage Package that doesn’t come with dialogue included. Yes, one of the major twists of “Willy’s Wonderland” that feels necessary to impart to potential viewers is that the star of “Mandy” and “Color Out of Space,” you know the one known for completely committed line readings of even the most ridiculous material, has not a single line of dialogue in this action/horror flick. Going for a strong/silent thing like the Western heroes that people like Clint Eastwood defined is definitely a choice, but that’s not really what Cage is doing here. Sure, he’s got the snarl and the stare down, but he’s closer to half-asleep than scary-cool. Cage has been accused of sleepwalking through some of his recent choices, letting the kitschy goodwill of his viral clips from other films do half of his acting for him. That’s never been truer than here.

Cage plays a drifter who gets trapped by a group of locals in a small town, including a sheriff played by Beth Grant. When the drifter is told his car repair will cost cash that the drifter doesn’t have, a deal is struck. If he can spend the night cleaning up the rundown family entertainment complex known as Willy’s Wonderland than the car repair is on the house. Of course, viewers are clued in early on that the plan is for our hero never to make it out of Wonderland. You see, the animatronic puppets there come to life every now and then, and they need a sacrifice. Meanwhile, a girl with a connection to the playland named Liv (Emily Tosta) convinces her friends to go with her to burn down the Wonderland once and for all, but first they have to save the new janitor. He doesn’t need saving.

After an interminable set-up, “Willy’s Wonderland” does get to the good stuff for about 40 minutes or so. That consists of Liv’s friends getting sliced up by animatronic creatures that look like they were designed in 1978 and then getting torn apart themselves by Cage’s brutal drifter. Sadly, the horror elements are flat, and the action is poorly choreographed that it's hard to even tell what’s happening half the time. There's also absolutely zero tension or danger. As many issues as I have with some of Rob Zombie's work, I was reminded how he can imbue films with out-there concepts like this (think "House of 1,000 Corpses" or "31") with some of his personality. They expected Cage to bring all of the personality here. He did not.

Neither did the rest of his ensemble (although Tosta could work in better material), but it's more a writing thing than their fault. Mostly, the cast of people dumb enough to have sex in a cursed Chuck E. Cheese recalls similar idiots who ignored characters like Jason or Freddy in bad movies in the ‘80s—the origin story of the Wonderland recalls “Elm Street” a bit too—but it’s legitimately hard to tell if this is intentional or just the kind of bad horror writing/acting that we don’t see as often as we did in the days of “Jason Takes Manhattan.”

Trust me, after a long week, I wanted a dumb-but-fun movie with a major action star going mano a mano with killer animatronic puppets. It sounds like an easy formula for a good time. About the time that Cage was attacking a giant gorilla with a plunger and then kicking in his brain against a urinal, I realized that none of this was fun. Imagine a birthday party for the classmate you liked the least in elementary school. It’s a party. How bad it could it be? Really bad. It could be really bad. 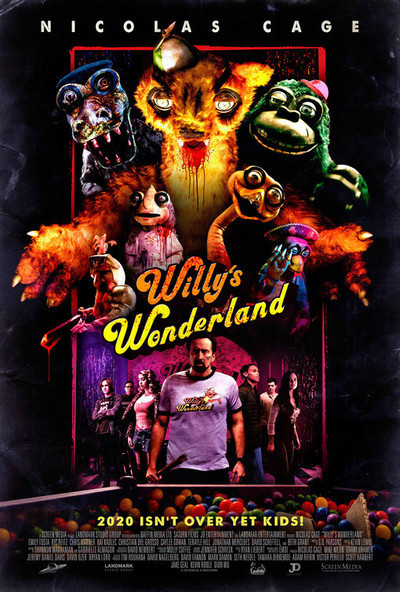 Nicolas Cage as The Janitor