More than most movies, it’s hard to know where to begin with an appreciation or critique of Panos Cosmatos’ “Mandy.” It’s a really difficult film to capture tonally and even narratively in a review, largely because it is such a stylish, visceral experience that it demands you give yourself over to it actively instead of passively analyzing it. On the one hand, it’s a thriller, of sorts, a vengeance piece about a man killing those who destroyed his life. But, man, does that not really capture the experience of this movie. Some have compared it to an ‘80s heavy metal album cover sprung to life, but that’s only part of “Mandy,” and doesn’t convey the emotional depth that saturates every frame. And then there’s the fact that “Mandy” is kind of two movies in one, a slow-burn journey into hell in the first hour and a blood-soaked climb out of it in the second. Did I mention the chainsaw fight yet?

Nicolas Cage stars in “Mandy” as Red Miller, a lumberjack who lives a quiet life in the woods with his girlfriend Mandy, played by Andrea Riseborough. One day, Mandy catches the eye of a cult leader named Jeremiah Sand (Linus Roache), who proceeds to conjure motorcycle-riding demons to steal the girl and make her one of their own. In the process, Red is tortured and nearly killed. The first half of “Mandy” is filled with long, color-saturated takes of impending doom. Even casual behavior like quiet scenes between Mandy and Red have a foreboding nature, and then the film peaks in the middle with a waking nightmare as Red sees something no one should ever see happen to the love of his life. Deeply traumatized, Red is destroyed, and there’s a sequence in which Cage drinks an entire bottle of booze (well he ingests the stuff that isn’t poured on his wounds) while in his underwear, howling like an injured animal. It’s going to be GIF-ed and mocked, but it’s actually a great bit of acting, conveying a man not just mourning or in grief but literally destroyed.

Like a character in a Queensrÿche concept album, Red emerges from this destruction with his plans for vengeance. With a title card that divides the film in half, “Mandy” then becomes the movie that most people will remember in that it’s about Red working his way through both the demons that Jeremiah conjured and, inevitably, the gang itself. The heavy metal comparison is apt not just because the genre often included figures like the nightmarish creations that Jeremiah brought to life but in the very structure of “Mandy,” which unfolds in a very untraditional manner in both halves. Scenes play out like songs on an album, episodically cast in extreme color palettes that amplify the trippy, surreal natures of the entire experience. “Mandy” is a fascinating genre exercise in that it is as untraditional a horror movie as you’ll see this year but also relies on so many classics of the form. It is, at its core, a downright biblical tale of evil and vengeance.

It’s also pretty bad-ass when it comes to stand-out moments, particularly an already-acclaimed fight with two men wielding chainsaws like they’re swords. It’s a perfect blend of the old and new in “Mandy” and a distillation of what the film does well in how it takes a familiar good vs. evil sequence and twists it to fit Cosmatos’ vision.

Having said that, there are times when I felt the length of said vision. “Mandy” runs over two hours, and a little of its style goes a long way. I think there’s a masterful version of this movie that runs notably shorter, but that doesn’t mean there’s not an unforgettable one the way it is right now.

One more thing before you go on this journey with Nicolas Cage: the incredible Johann Johannsson ("Sicario," "Arrival") does the best of his career in this, his final film composition. The score here is another character, a series of screeching, violent noises that add to the tone of the film in ways that can't be overstated. The film simply doesn't work without it. And, as much as I like other parts of the movie, Johannson's work alone justifies a viewing. It reminds us how much we lost by his early passing. 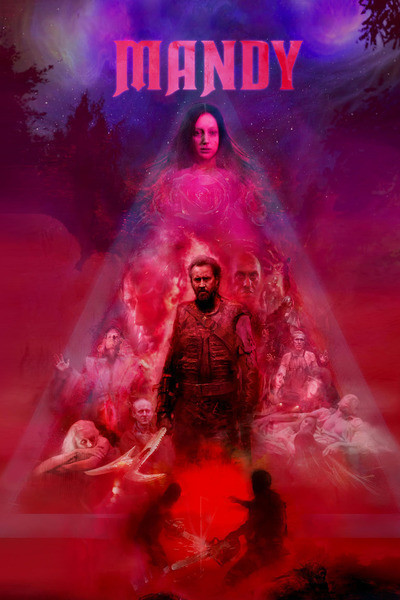 Richard Brake as The Chemist