"Welcome Home" is part of a long tradition of thrillers about devil figures who amplify tension in a couple's relationship, hoping to steal one half of the couple away, or simply torment (and maybe kill) both of them.

The couple here is Cassie and Bryan (Emily Ratajkowski and Aaron Paul), good-looking young Americans who rent a spacious villa in Italian farm country, hoping to repair a relationship damaged by Cassie's infidelity. The devil figure is Federico (Riccardo Scamarcio, last seen in "John Wick: Chapter Two"). He's an eloquent, charming, faintly sinister man who, as Bryan points out, seems to magically appear in their lives at moments of crisis.

The movie fills in the details of Cassie's betrayal in a series of flash cuts synced up with Bryan's moments of anguish. Federico simultaneously stokes Bryan's feelings of emasculation and resentment and starts hanging around Cassie, acting like a gentlemanly Prince Charming and giving her a rugged shoulder to cry on.

You know where this is all headed, although there are a few strong scenes along the way (particularly Federico and Bryan's drunken night out) that let the actors zero in on psychological details and make a meal of a moment. The otherwise appealing Ratajkowski is a bit vague in certain scenes, and she seems so sweet and loving that it's hard to square Cassie's demeanor with her indiscretion, even after the script has spelled it out for us. Paul gives Bryan an arrogant, self-loathing, resentful edge that makes him into something more than a tortured boyfriend (and hints at why Cassie cheated); he's particularly good in scenes where Bryan takes a hard look at his own weaknesses.

Scamarcio has the trickiest role, and he doesn't disappoint. He’s spot-on as a man who presents himself to others as a charismatic, confident, Big Bad Wolf-type, but is privately disturbed and pathetic. The character is the star as well as the writer-director of a melodrama he created, but there has to be something defective in a personality that needs to create melodrama in the first place. Scarmacio's performance is so intricate that he manages to suggest a backstory for Federico even though the film is mostly mum on where he came from and what drives him. His darkly handsome features and boyish sense of menace evoke Javier Bardem and Ray Liotta in villain roles. You feel sorry for his character even when you're rooting for his violent death.

As directed by George Ratliff and written by David Levinson, the movie unfolds along fairly predictable lines. The minute you see the couple settling into that beautiful house, you know that the story has to end there, probably with several prolonged acts of gruesome violence, because that's how these movies resolve. It's a built-in aspect of the genre, like the gunfights that end Westerns. What matters is what the filmmakers do with the standard elements, and how they get to the ending.

And on that score, unfortunately, "Welcome Home" has to be considered a missed opportunity. Directed with panache by Ratliff, with widescreen images by Shelly Johnson that use negative space to isolate and target the characters, the movie showcases a group of artists pouring their hearts into a work whose storytelling emphasis is misguided. "Welcome Home" is too interested in things we've seen before—namely, anything having to do with the standard troubled couple/devil figure configuration—but it's not interested enough in things we almost never see in thrillers, such as the microscopic details of Cassie and Bryan's unhappiness, which are woven into the expected plot points and sensitively acted; and the moral implications of the ending, which is unexpectedly a knockout.

The last 15 minutes of "Welcome Home," in fact, is vastly superior to everything preceding it. Twisting the plot in unexpected directions, it nails a tone of delighted black humor that can hold its own with the best thrillers by Alfred Hitchcock, Brian De Palma, and David Fincher. In contrast to the earnest anguish and terror of the rest of the picture, it's audacious and cheeky, verging on naughty. It goes too far, then way too far, in a good way, putting a bizarre new frame around the movie you've been watching. But once the buzz from the ending fades, you may find yourself resenting "Welcome Home" for not figuring out that it could've been a classic until it was too late. 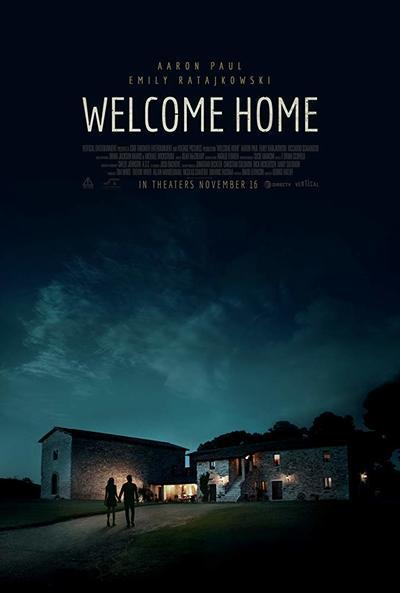 Rated R for sexual content including graphic images, nudity, language and some violence.