James Gandolfini will probably always be known as Tony Soprano from "The Sopranos," but he's such a versatile and surprising performer that within a few minutes of watching him play a different character, you forget about his most famous role. There's a gentleness and decency to this actor that comes through even when he's playing men with very dark shadings. At the same time, though, there's something mysterious about him, a suggestion of menace, or at least deep hurt and dysfunction, and this prevents his nicer characters from becoming too milquetoast. Even when he's performing a seemingly straightforward role, he makes it seem as if you're seeing the tip of the psychological iceberg. Amazing as he was as Tony, very likely the role of his life, he was just as distinctive in "True Romance," "The Last Castle," "In the Loop," "Romance and Cigarettes," "Killing Them Softly," "Cinema Verite" and "Zero Dark Thirty," and as the voice of the monster in "Where the Wild Things Are" who struggled to contain his violent impulses. The only thing predictable about Gandolfini is his excellence. He's an actor you're always happy to see.

As Michael, a thief awaiting execution by two assassins in "Violet & Daisy," Gandolfini adds another indelible portrait to his ever-growing collection. He's marked for death for daring to steal from a criminal kingpin, but he lives longer than he should simply by being so unpredictable, so odd and sweet. In one scene, the assassins burst into a room where they expect Michael to be seated in a chair and unload dozens of rounds at him, only to discover that he's moved; when he appears in another part of the room, he's holding a tray of freshly-baked cookies, and offers some to the would-be killers. Gandolfini's face is so warm and genuine, yet so mysteriously unsettling, that this seems like plausible behavior.

Gandolfini's quietly magnificent performance is the only reason to see "Violet & Daisy," a thriller that might as well have been released in 1996, when everybody and their brother and their sister and their cousin twice-removed was trying to be Quentin Tarantino, writing screenplays about loquacious hit men and gangsters and molls delivering cutesy monologues in wacky, not-quite-real universes. The aforementioned assassins,  Violet (Alexis Bledel) and Daisy (Saoirse Ronan), are young, beautiful women whose blank-faced sweetness is a cover for their incredible and seemingly soulless violence.

They live in one of those movie worlds that seems to contain underworld types and nothing else, one filled with signifiers and tropes and cliches borrowed from whatever films, TV shows and modern art movements the filmmaker enjoyed. They share a lovely little apartment that's art-directed, like every other set in the film, to look like the showroom of a vintage furniture and knicknacks emporium. They behave as if they're two little girls taking part in an endless slumber party, one that just happens to include violent hits carried out with silenced pistols, often with disguises employed. In an early sequence, Violet and Daisy pose as nuns delivering "Righteous Pizza" (the film apparently left out the scene where they create the convincingly monogrammed boxes) then engage in an elaborate, bloody gunbattle with thugs in an apartment building lobby, unloading round after pinpoint-accurate round. In their down time, they bounce on beds and look at fashion magazines and fantasize about saving enough money to buy pretty dresses they've had their eyes on. They ride to hits on tricycles. The previously-mentioned cookie scene only works because Violet and Daisy decided to close their eyes before leaping into the room and firing at their target -- another acknowledgement that they're overgrown girls, or emotionally arrested young woman, and that this is all a big game to them, no matter how hardboiled Violet acts. It's that kind of movie -- Tarantino by way of "Juno" or "Son of Rambow", childlike yet knowing, packed with bright, jumbled production design and mournful atmosphere, and sadly lacking soul.

Daisy, we're told, is all of eighteen, but has the sexual sophistication of a nine-year old, and Violet isn't much older. Violet is worried that Daisy can now be tried as an adult, should she ever be prosecuted for her crimes. The young women have an older sister-younger sister dynamic, with Daisy as the innocent/ignorant one -- a running gag involving a dirty joke that Daisy is too chaste-minded to get makes her seem as intellectually limited as Lenny from "Of Mice and Men" -- but both actresses give such monotonously flat performances that the characters never seem like much more than concepts, or perhaps walking allusions. But to what, exactly? The hit girl character from "Kick-Ass", perhaps? Or Sissy Spacek's morally arrested woman-child character in "Badlands," who enabled her boyfriend's murder spree? Or something or someone else that, for whatever reason, just isn't coming across onscreen?

The film's writer and director, Geoffrey Fletcher, won a screenwriting Oscar for adapting 2009's "Precious." He has an eye, a sense of rhythm, and an impressive control of tone. This work doesn't lack for conviction. Everything about "Violet & Daisy" bespeaks certainty of vision. The filmmaker obviously knows why he's showing us certain things, and in a certain way. And yet none of gels into an emotionally or philosophically coherent experience, and the tone is so muted that the whole picture seems to have recently recovered from a botched facelift that made it inexpressive, like a mask.

The lead actresses might have been capable of more than they show us here; likewise Danny Trejo, Marianne Jean-Baptiste and other reliably strong supporting players -- but they seem to be giving the director what he wants, and unfortunately it's hard to tell what, exactly, that might be. Only Gandolfini transcends the film's constricting, dot-the-I's-and-cross-the-Ts compulsiveness in sticking to its inscrutable agenda. In later scenes in which Michael and Daisy forge a weird yet affecting father and daughter-type relationship, one can glimpse a more direct and powerful film fighting to get out, and failing. 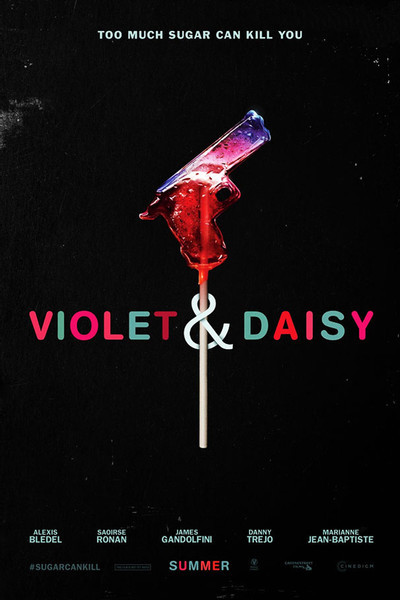