Pandemic conditions have impacted productions around the world in a negative manner, but they have also actually helped some horror films return to their roots. There’s a B-movie, guerilla filmmaking tenor to the relaunch of the “V/H/S” anthology series this week that fits the material perfectly, allowing the franchise to reboot after the dismal “V/H/S: Viral” and deliver the gory goods. Seven years after a film that I hoped “better represent the bottom of the barrel for this franchise because I don’t think I can take much more,” the producers have gone back to what really worked about this series in the first place, a goofy, blood-soaked homage to DIY filmmaking that gives creatives free rein to unleash their weirdest impulses. The resulting “V/H/S/94” falls victim to the traditional unevenness that is common to anthology horror but with more hits than misses, and a general air of unhinged joy for the genre that these films often lack.

The concept is similar to the previous three films with a wraparound segment (directed by Jennifer Reeder, “Knives and Skin”) about a SWAT team on a mission into a building that appears to have been taken over by a cult of VHS nasties. Bodies are slumped in front of screens, their eyes on the floor next to them. As the SWAT team finds increasingly disturbing scenes of carnage, the anthology unfolds on the TVs, and the production this time very accurately embraces the aesthetic of recording on tape, complete with picture jumps, static, and focus issues. (It's the first one that actually feels shot on VHS.)

Chloe Okuno helms the first segment, “Storm Drain,” which tracks a reporter (Anna Hopkins) as she hunts down reports of a mysterious “ratman” that lives in the sewers. Thinking she’s turning an urban legend into a human interest piece about the homeless that live in a storm drain, the reporter finds herself in over her head pretty quickly. Cleverly shot and with some remarkable practical effects, it’s a solid tone-setter in that it’s mildly humorous before diving into the dark end of the drain.

Simon Barrett, a series regular, helms my favorite of the new anthology, “The Empty Wake,” which has a classic ghost story structure in that it follows a new mortician (Kyal Legend) who has been tasked with managing a wake on a dark and stormy night. Of course, no one is coming out during a tornado warning, so it’s just her and the body ... which starts making noise. Barrett structures this one beautifully, ending it in a freaky sequence that this gamer thinks intentionally recalls both “Silent Hill” and “The Last of Us,” although I could be wrong. The film is wonderfully executed, maintaining the trapped POV of three stationary cameras, but cutting between them with perfect rhythm.

Absolute cinematic lunatic Timo Tjahjanto (who did “Safe Haven” in “V/H/S/2” and the Netflix hit “The Night Comes for Us”) proves there are no boundaries in another short that feels video game inspired, “The Subject.” A mad scientist has been kidnapping victims to create some of the most insane lab experiments on film in a long time. The tense, experimental first half gives way to what is basically a first-person shooter as a SWAT team is dispatched by one of the doc’s more notable “successes.” Seen through the POV camera of this killing machine, Tjahjanto’s short will make gorehounds squeal, but it’s also a clever mix of extreme violence and sympathy in that the creature unleashing absolute Hell is also a victim.

Finally, there’s Ryan Prows' “Terror,” which mixes a Michigan militia story with vamp culture in a way that’s incredibly promising but doesn’t really add up to much. This feels like a feature script trimmed down to fit the anthology more so than the other films, although I do admire the way Prows seems to enjoy highlighting the violent stupidity of groups who just want to see the world burn. There are places in “94” when it feels like the product doesn’t fit the space—either dragged out to meet it or crammed into a small container. “Terror” has the latter problem although it's just fun enough to not care.

Shudder is the perfect place for a “V/H/S” revival. They have embraced the nostalgia that often oozes through the blood of horror fans, and they are no stranger to the kind of low-budget, limited condition filmmaking that “V/H/S/94” both pays homage to and employed in its production. Getting a group of five horror voices together every year and allowing them to go nuts is a business plan I can back. Given the way I felt about “Viral,” I can’t believe I’m saying this, but bring on “95.” 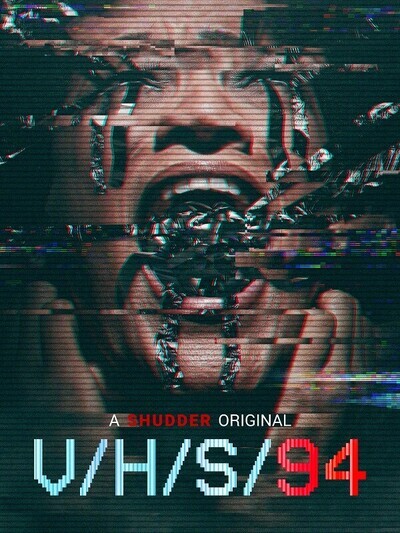