Nuttier and cornier than the snack-food aisle

If it can be said movies have personalities, I give you three words to sum up the basic core identity of "Safe Haven":

This film is nuts. Not in a "wacky comedy" or "outrageous adventure" or "insanely effective romance" kind of way.

Nuts as in, either the filmmakers were out of their minds, or they must think we're out of our minds to buy into this schmaltz. Nuts as in a key character we believe to be pretty much OK turns out to be OUT OF HER MIND.

Let us start at the end and work our way back to the beginning, and yes, I am issuing a blanket SPOILER ALERT from here on out, though I will do my best to let you experience firsthand the complete and utter WTF moment I experienced in the last few minutes of this movie, should you choose to see it. (But to paraphrase Mickey Rourke in "Body Heat," I don't think you should do it in the first place.)

In the final few minutes of "Safe Haven," one of the leads reads a letter filled with common sense advice and heart-tugging emotion. The letter also contains a stunning reveal about another key character in the story — and this reveal tells us, without a shadow of a doubt, that the person reading the letter is either deeply delusional or has experienced a phenomenon that should have the letter-reader screaming with terror. As we see flashbacks designed to support the big twist, we're only reminded of how insane the whole thing is.

Until that moment, "Safe Haven" was a relatively entertaining, 2.5-star movie that was equal parts sweet romance and tense crime thriller.

Directed by the versatile Lasse Hallstrom ("Salmon Fishing in the Yemen," "Chocolat" (2000), "What's Eating Gilbert Grape") and starring the attractive duo of Josh Duhamel and Julianne Hough, this is yet another entry in the Nicholas Sparks book-to-movie factory that has given us "The Notebook," "Message In A Bottle," "Dear John" and "The Last Song," among others.

You can usually tell it's a Nicholas Sparks-inspired production just by the poster. Impossibly attractive couple in deep embrace, against the backdrop of the sun setting over the Carolina coast or a driving rainstorm. That sort of thing.

Sparks is an unabashed champion of cornball romance, but he's also quite the merchant of death. A disturbingly high percentage of his main characters either dies, mourns the death of a loved one or faces great peril. And if you're a kid in Nicholas Sparks movie, don't think you're safe. Water and fire are NOT your friends.

Flashing a friendly smile and hopping around in short-shorts for much of the film, Julianne Hough is Katie, a Boston native who arrives in an idyllic town in North Carolina and is welcomed with open arms. She gets a job at the wildly popular local fish house, buys a fantastic fixer-upper cabin nestled deep in the woods and strikes up a friendship-and-maybe-more with the conveniently widowed Alex (Josh Duhamel). He has a beyond-precious daughter, a mildly grumpy son who's old enough to remember his dead mom and a delightfully crusty uncle whose only role in life is to lurk in the background, making sure Alex opens his heart to the possibility of romance. This Alex is some catch. He'd be the ultimate prize on "The Bachelor."

Duhamel and Hough have a lovely and natural chemistry, spending time at the beach, making out in the moonlight and starring in Musical Interludes. But Katie is haunted by a past in Boston that includes a violent encounter that left somebody in a pool of blood on a dining room floor. David Lyons is chillingly effective as a cop who at first seems dogged and then becomes consumed with tracking down Katie.

"Safe Haven" isn't much for subtlety and it's more than a little reminiscent of the Julia Roberts flick "Sleeping with the Enemy." But for 90 percent of the journey, I was on the verge of giving it a mild recommendation or at least saying this was a solid and perfectly acceptable Valentine's Day week movie for those in the mood for some good old-fashioned, great-looking-couple-gets-caught-in-the-rain romance.

And then that thing happens at the very end, and instead of giving "Safe Haven" an extra layer of heart and soul, it had me saying, "Wait, WHAT?" all the way through the closing credits and right up to this very moment. I almost want you to see this movie so we can compare notes and you can tell me if you were as flummoxed — that's right, flummoxed — as I was. 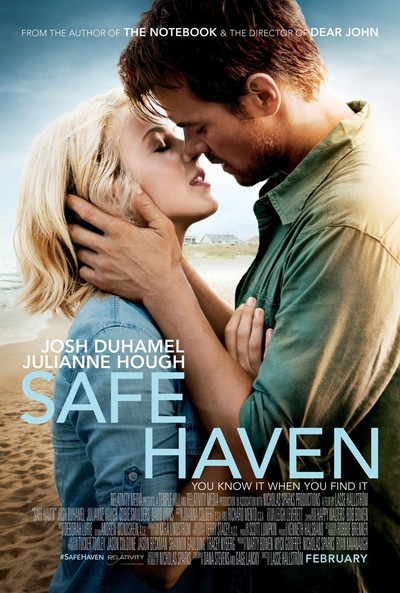 Rated PG-13 for thematic material involving threatening behavior, and for violence and sexuality