Jennifer Reeder’s “Knives and Skin” features several sequences of people born well after the ‘80s singing alternative rock hits from the era, sometimes in choir scenes but sometimes purely in character as a musical. They are sung a capella and often with little emotion, as if a statement on young people going through routines without understanding the subtext of the lyrics they’re belting out. Maybe? I don’t know. Most of “Knives and Skin” is purposefully opaque, straddling that line between open to interpretation and something that’s designed to purposefully frustrate and confuse. A lot of Reeder’s film was very clearly inspired by David Lynch’s work on “Blue Velvet” and “Twin Peaks,” but the surrealism in those projects emerges from deep emotional wells and commentary on the myth of the perfection of white picket fence suburbia. Like the songs sung by its young cast, “Knives and Skin” feels like cinematic karaoke, lacking in authorship or deeper meaning. The cast, two actresses in particular, give it their all, but it is an aggressively hollow experience.

Carolyn Harper (Raven Whitley), dressed in her band uniform, carves her initial in the forehead of a jock named Andy Kitzmiller (Ty Olwin). He doesn’t care because he thinks he’s about to have sex, but she pushes him away. An angry Andy storms off with Carolyn’s glasses, leaving the girl stranded. She never makes it home. Did she simply run away? Is she still injured somewhere in the woods? Or is she dead? The movie that follows pretends to care but is more about the impact of her disappearance than any sort of mystery waiting to be solved.

Much like in the town of Twin Peaks, the classmates of the missing girl and their parents have more than a few idiosyncrasies. Reeder cycles through the lives of these teenagers, most of them addled by obnoxious boys and men. The most interesting is Andy’s sister Joanna (a promising Grace Smith), who ends up hit on by her substitute teacher and selling her mother’s underwear to another school official. The point that awful boys will become awful men is an interesting one, but these subplots are underdeveloped. Every time something feels like it’s about to gain thematic traction or narrative weight, “Knives and Skin” just floats off in another direction altogether. Maybe that’s part of the point? The inconsistency of the teenage existence? I feel like that may be giving a half-baked screenplay a bit too much credit.

The adults are even crazier, and they fare better in terms of character and performance. Marika Engelhardt throws herself into the grieving mother role, crying as she conducts her choir to sing “Our Lips Our Sealed” and sniffing Andy’s shirt and neck because they smell like her missing daughter. There’s something dangerous in her performance that the rest of the film sorely lacks. Every other adult has their baggage from infidelity to outright living a lie. Again, it’s a theme of Lynch or Gregg Araki to spotlight how adults are no more mature than their teenage children, but “Knives and Skin” feels like it doesn’t understand how to do this past a superficial level.

Ultimately, “Knives and Skin” is about being trapped in suburbia—the kids standing on the roof of their school and looking at a distant freeway, hoping to escape. Many of the ‘80s hits they sing by artists like The Icicle Works and New Order were also about escape, but the people who wrote and sang them believed every word of their passionate declarations. I kept wanting “Knives and Skin” to actually go from a whisper to a scream instead of just fooling me into thinking it had the emotion behind it to do so. 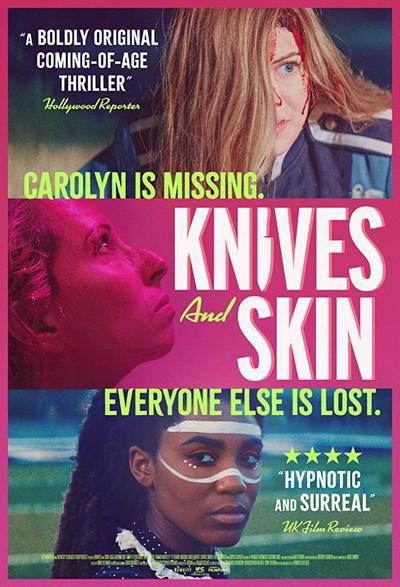