True History of the Kelly Gang

A star vehicle for young character actor George MacKay ("Pride") and a visual tour-de-force that gets high on its own look and sound, "True History of the Kelly Gang" seems at first as if it's going to be one of those super-bloody, super-nasty Westerns that's so macho that the images might as well sprout chest hair. But it quickly settles into a groove that's more of a hyper-intense lament for men and women who've been cursed to spend their lives chafing at the roles that their societies have saddled them with, as well as a sardonic look at the damage that colonialism does to the psyches of the colonized.

Kelly was an anti-authoritarian of Irish descent who became a bushranger (wandering robber) under the tutelage of Harry Power (played onscreen here by Russell Crowe), then waged war on Australian colonial police, partly as a result of ugly run-ins between Victorian police and the Kelly family. He and his gang were crushed in a shoot-out with law enforcement in 1880 after failing to derail a police train. The gang was wearing homemade metal armor at the time, in hopes that it would deflect bullets. Kelly was tried and hanged. He was 25.

Kelly's story has been retold numerous times, and the lead role cast with a dizzying array of actors (including Rolling Stones frontman Mick Jagger). "True History" is one of the more arresting attempts, in part because it treats the outline of the tale as raw material for flights of fancy, seemingly modeled on psychodramatic spectacles like "The Sacrifice," "A Clockwork Orange," "Apocalypse Now" and "The Assassination of Jesse James by the Coward Robert Ford," and anchored in intriguingly retro Freudian situations and images. The latter often play like something you'd encounter in a mid-century Hollywood classic like "Rebel Without a Cause," a melodrama in which two boys and a girl from dysfunctional families play "house" in an abandoned suburban home, and the hero, a sensitive young man buckling under nonstop pressure to act tough, suffers a breakdown in front of his dad, a man he condemned as emasculated and who happens to be wearing an apron at that moment. It's not subtle. But neither are dreams.

Adapted by screenwriter Shaun Grant from the novel by Peter Carey, and directed by Justin Kurzel, "True History" is a dream, or nightmare, about Ned, his family, Australia, manhood, womanhood, and how hard it is for poor people to escape the class they were born into. The movie is broken into three sections: childhood, adulthood, and the gang's violent end. It's scored with a mix of ambient scoring that often (deliberately) evokes a horror movie, and anachronistic country and punk songs. A couple of them are performed by singer-songwriter Marlon Williams in character as George King, a visiting American cowboy who falls in love with Ned's mother and seems destined to become his stepdad, even though they're practically the same age. Ned narrates the story in the form of a long letter he's writing to his daughter from prison to set the record straight—i.e., tell her his own version, to counteract media demonization.

The locations favor landscapes of brown grass and leafless trees that reach up toward overhanging clouds. The camera often tracks tiny figures on horseback laterally or from overhead as they race through these blasted or starved-out landscapes, which evoke panoramas from a World War I or post-apocalypse picture. As the story unfolds, it starts to sink in that both the landscape and characters are supposed to be figurative or emblematic rather than "realistic"—the stuff of dreams. The images become flamboyant, even theatrical. The winner of a bare-knuckle brawl preens like a cartoon gorilla, loping on all fours and rising up to pound his chest. Ned's mother stares at a grove of denuded trees at night and sees her husband and son writhing in existential torment, shirtless and lit by an immense strobe light.

There are almost no "normal" relationships to be seen. Whether the film is detailing connections between family members, friends, or different representatives of a society or government, there's always a twisted, broken, or disconnected aspect. Police sworn to protect citizens exploit them financially and/or sexually (starting with Charlie Hunnam's Sergeant O'Neill, a sexual predator who can't seem to stay away from the Kelly women). Mothers and fathers alternately protect and exploit their own children (Ned's own mother sells him off at one point) and men and women in romantic relationships verbally and physically abuse each other without subsequent comment, as if such behavior is to be expected when you get together with somebody.

Men, women, and children are constantly threatened, tormented, sometimes killed without warning. Men are beaten until their faces cave in. Men's genitals are brutalized as punishment for transgression. Women get punched in the face whenever the man they're arguing with feels like he's losing. Everyone accepts that their lineage might not be whatever they were told it was. You can't depend on anything: the law, the family, truth, justice. To paraphrase the title of a Werner Herzog classic, it's every person for themselves and God against all. This is a cruel, cold world—so unrelenting that it's a miracle that someone like Ned, who has endured a lifetime of suffering, could be nice to anybody, even for a moment.

The filmmakers conceive nearly every significant moment as a face-off between strong-willed people (usually two men, but sometimes a man and a woman) that escalates to verbal or physical violence, except when it escalates to physical intimacy: not just intercourse, oral sex, or post-coital conversations (the story begins with a child secretly watching a sex act, and there are many sequences set in brothels where women service men) but a long, chaste embrace with tons of eye contact (between men and women, but also between men and men).

That last thing is notable. You don't usually see it in the Western, still a very male, straight genre, unless the storytellers are attempting a homoerotic or queer take. That's the case here. The way the film walks the line between obvious and subtle is fascinating. It's knowingly building on the long tradition of films like "Cool Hand Luke," "The Wild Bunch" and "The Deer Hunter" in which repressed straight men express their bonds through heroic or nihilistic acts of violence, as well as displays of vulnerability that are coded as expressions of "brotherhood" rather than "love" because to love another man would be "gay."

This pressure exists in "True History," but strangely—and delightfully—the characters often seem immune to it unless other people remind them that it exists, and behave in ways that flout those norms. Not only do members of Ned's gang sometimes wear dresses during raids, individual male characters wear dresses just because they enjoy wearing dresses. The design, wearing, and care of dresses is a major preoccupation here, a statement you couldn't make about most period pieces where the major characters are men. In one of the brothel scenes, Ned's main antagonist as a grownup, Constable Fitzpatrick (Nicholas Hoult)—a corrupt Victorian policeman who exploits the citizenry—sits nude on a parlor loveseat while the full-clothed Ned sits beside him. He casually asks Ned if he's ever "fucked in a dress," then recommends it because it makes a man feel as if he's breaking the rules.

As staged by Kurzel, the self-sacrificing, all-encompassing love that certain characters express for each other becomes magnetically erotic, even when there's no narrative likelihood that they'll actually have sex. Whenever Ned gazes into the eyes of his mother Ellen (Essie Davis), who sold her body to support her kids and then sold Ned himself, and whether we're seeing Ned as a boy or a man, we always get a sense of modified Oedipal longing, with the son subconsciously wishing to possess the mother in order to protect her from degradation at the hands of another man (or men). Often their faces are positioned so close together that it creates an unsettling tension. This is how characters are blocked onscreen when they're about to start making out.

And even though Ned eventually falls in love with a young sex worker named Mary (Thomasin McKenzie) who has a young child, his purest and most satisfying emotional relationship is with his "best mate" Joe Byrne (Sean Keenan). Ned and Joe unselfconsciously embrace, often prone and sometimes spooning. Their posture simultaneously suggests lovers enjoying a rest after sex, and a pair of very young boys who don't think it's unnatural to hug that way because they haven't been taught homophobia yet.

"True History" is a bit of a mess, with alternately too-fragmented and too-compressed storytelling—for instance, when the time comes for Ned to have an outlaw gang, he just suddenly has one, and we're deprived of the surefire pleasure that gang-building sequences in these movies always deliver. (The credits list nearly twenty people as members of "The Kelly Army"; none have names.) And as much thought has been put into the film's psychological and mythical architecture, it's a bit anemic when it comes to historical particulars. (For all its fixation on the resentment of white immigrant settlers and former convicts against the British, aboriginals are barely seen or discussed.)

And it should go without saying that if you're looking for a historically rigorous account of Ned Kelly's life and times, you should look elsewhere. Aside from a few key moments, the filmmakers are no more faithful to the particulars of history than John Ford was to the story of Wyatt Earp in "My Darling Clementine," or Shakespeare to Julius Caesar. Still, this is a wild swing that connects. It's myth-making, splattered in blood, scored with an electric guitar, and enacted with such brazen bigness that you wouldn't be surprised if the cast assembled for a curtain call at the end.

"True History of the Kelly Gang" is available on Digital and VOD today, 4/24. 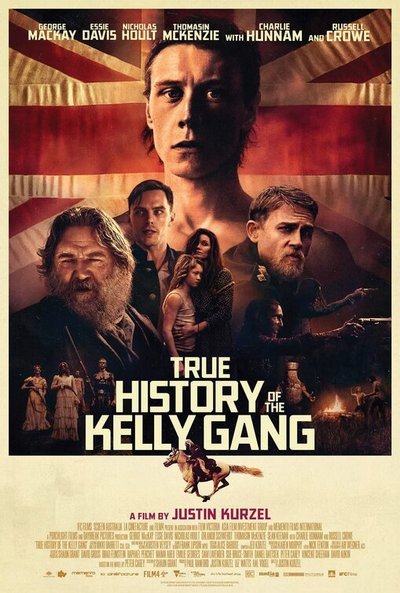