“Pride” wears on its sleeve the desire to make its audience stand up and cheer. It is willing to occasionally plumb the depths of familiar formula to achieve its goal. Here is a true story that could have been played as straight drama, yet the filmmakers opted for a lighter approach to capture hearts and minds. The Brits do this type of crowd-pleaser far better than Hollywood, if only because films like “The Full Monty” and “Billy Elliot” were unafraid to temper sweetness with darker elements of reality. The characters in “Pride” may exist in a frothy cinematic contraption, but all is not sunshine and roses.

During the UK Miners Strike of 1984-85, an unlikely ally showed its support for the miners. Led by Mark Ashton (Ben Schnetzer), the London chapter of Lesbians and Gays Support the Miners (LGSM) started to collect money to help the union workers. Standing outside the “Gay is the Word” bookstore, Mark and his friends hold buckets and chant out the name of their organization. Some people donate, but others spit at them. Mark convinces his friends to persevere because the only people the homophobic British newspapers treated worse than gay people were the miners. “If anybody knows what this treatment feels like,” Mark says, “it’s us.”

To its detriment, “Pride” doesn’t provide more details on how Mark got the idea to support the miners as opposed to some other cause. According to Wikipedia, supporters of the strike were advised to partner with mining communities because the government had seized all union funds, making donations to the national miners union impossible. This explains LGSM’s numerous attempts to partner with communities, all of which are happy to team up until they hear the name of the organization. Through a misunderstanding about the group’s acronym (“I thought the L stood for London,” says Paddy Considine’s miner, Dai), LGSM hooks up with the Dalais Valley miners in South Wales. After meeting with the group, Dai invites them to attend a union meeting in his Welsh town.

Those joining Mark on the trip include Joe (George MacKay), a college student who is not out to his parents, and May-September couple Jonathan (Dominic West) and Gethin (Andrew Scott). Joe is our audience stand-in, a shy, inexperienced young man who meets Mark at the 1984 London Gay Pride parade. In most movies, Joe’s story would be the primary arc; here he’s just one of several stories that unfold in “Pride”. Welshman Gethin’s return to his home country after 16 years, and his relationship with polar opposite Jonathan, are given almost equal time. The mining town is represented by Considine’s Dai, Imelda Staunton’s Hefina and Bill Nighy’s Cliff, all of whom have their own moments to drive the plot. Mark’s own successes and struggles as the leader of LGSM are threaded throughout everyone else’s tales.

Director Matthew Warchus reveals a Broadway musical theatricality in his juggling of these plot lines, tying everything together into a neat, effective package that will play well to a packed house. He sometimes let scenes ramble on longer than expected or even warranted, but this is a forgivable sin when the actors so compellingly inhabit their characters.

Now, about all that cliché: You know me. I’m Mr. “cliché isn’t a bad thing if it’s done right.” There are several predictable aspects of “Pride,” some of which, believe it or not, actually did happen. You can see the “Pits and Perverts” concert idea coming from a mile away (and not just because it’s an actual event that took place). You can easily predict that one of the mining town characters will out himself as gay. The outcome of Gethin’s visit to the mother who kicked him out is never in doubt. The biggest adversary to LGSM’s charitable efforts tows a hard line of standard-issue villainy. Someone will dance with reckless abandon and use his skills to help some straight guys woo a few ladies. And of course, some of the stodgy old mining town people wind up unashamedly partying at a gay bar and looking at dirty magazines. (Seeing Harry Potter’s Dolores Umbridge hold up a huge sex toy might be worth the price of admission.)

And yet, inside each of these elements, “Pride” finds a way to surprise and move us. Some of them unfold in a quieter way than one would expect. And we are never completely untethered from the movie’s harsher realities. They are woven in, sometimes at the fringes and sometimes in the center of the action. The 80’s era paranoia and misinformation about AIDS haunt the proceedings, as does the danger of being out and proud in a hostile environment. The fear of identifying and associating with people whom society rejects is always in the background, as is the fear of familial rejection because of one’s identity.

That last one is most notable in Joe’s story. At one point, Mark gives Joe a button that says “I am (discreetly) gay,” and the running joke about Joe using a fake college cooking class to cover for his LGSM activities gives way to a haunting and sad confrontation with his family. Warcus shoots it so that we cannot hear what is being said, eventually panning away as if it were too painful to see.

The title “Pride” comes to mean different things for the film’s characters. For some, it’s pride in their achievements; for others, it is pride in who they are or what they have become. Each actor gets to play a riff on this, with the standouts being West, Nighy, Schnetzer, Staunton and MacKay. They all contribute to a movie that is a lot of fun to watch and, for me, was profoundly moving at numerous intervals. The last scene, at the 1985 London Gay Pride parade, is as good an emotional moment as any I’ve seen this year.

The takeaway message of “Pride” is that meeting someone of a different race, gender, orientation or status is a lot more informative, honest and enriching than experiencing them from the error-prone safe haven of a TV set's depiction or favorite website’s description of them. In doing so, one can make a difference for oneself and the world at large. We are not that different from one another, and we could use all the help we can get. This too can be seen as a clichéd message, but it’s one I wouldn’t mind repeated on infinite loop until everybody believed it. 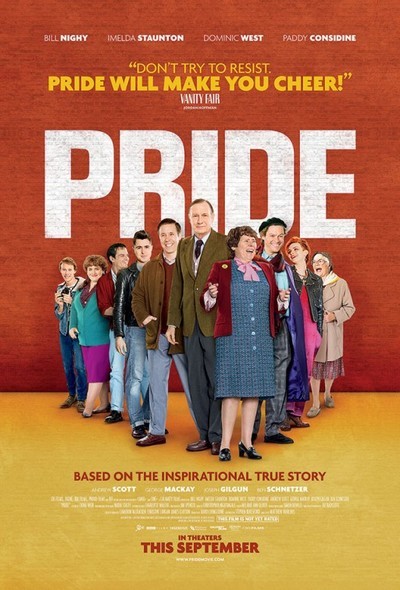