Cycling mockumentary “Tour De Pharmacy” doesn’t aim to be more than pure, uncut silliness—composited of famous faces in goofy wigs and irreverent humor—and that hardly proves a deficiency. With a running time of 39 minutes, it's double the length of Louis Malle’s famous and much more serious Tour De France short doc "Vive le Tour," but it can be just as captivating in its own way.

Written by Murray Miller, this treasure trove of goofy gems is about the Tour De France in 1982, in which an entire roster of racers was knocked down to five once it was discovered that everyone was doping. Director Jake Szymanski’s film focuses on the five that remained. Characters include Daveed Diggs’ Slim Robinson character, who is obsessed with being known as “the first black something,” like his famous uncle, Jackie. Then there’s Andy Samberg as Marty, the “first African” to join the Tour De France, even though it becomes clear that he’s a obnoxious American kid who only lives in Niger because his parents own a diamond mine. John Cena plays an aggressive Austrian rider who in the previous year was skin-and-bones before he did steroids; Freddie Highmore portrays a woman (portrayed by Julia Ormond in modern-day interviews) who pretended to be a man in order to race. With its main characters in particular, "Tour De Pharmacy" gets a lot of mileage with the way it pokes at the white male privilege at the center of such a sporting event.

As a sports narrative, Szymanski vaguely follows the bizarre events of this very fake race but lets the comedy be steered by character development and hilarious side observations from talking heads. Like his previous tennis mockumentary "Seven Days in Hell," the taste for straight-up silliness thrives well beyond its initial sport.

Explaining what is specifically funny about a film like this is like listing off musical notes to describe a melody, but I can say that what the film wants to do it does very well; the revolving door of celebrities playing oddball characters is always a great factor, my biggest laughs coming from the legendary Maya Rudolph and the immaculately droll Nathan Fielder. It’s a surprising ensemble of brief cameos here and there but has the neatness where performances are fleshed out for the time they are needed. There are plenty of other people of note, too, like Jeff Goldblum, Dolph Lundgren, Kevin Bacon, Danny Glover, Adewale Akinnuoye-Agbaje and even J.J. Abrams (the latter who can be seen singing the praises of "Juwanna Mann.") The only unamusing talking head? Lance Armstrong, whose appearance as a doping expert is like a teeth-gnashing epilogue for his sleaziness in real-life documentaries like "The Armstrong Lie."

The 39-minute running time is one feature that nags the project, despite the story's intention to be as fleeting as it is goofy. It has such adrenaline that you imagine it could be longer, and the movie doesn't give much to take away aside from memories of laughing. But for a small project that merely wants to be silly, it comes down to speed: a good feature comedy is roughly laugh-a-minute stuff, and this does well with its half-length—a laugh every 30 seconds, often a big one, sounds about accurate. As a piece of entertainment that primarily aims to distract and delight, it’s can’t-pass-up goofiness. 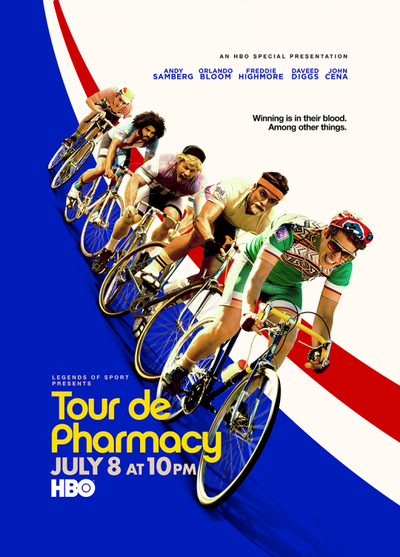