The post-“TomKat” tabloid baggage that Katie Holmes continues to be saddled with is, unfortunately and unfairly,  far weightier than her movie career of late (just try Googling her name and “Jamie Foxx” and see what happens). While her couch-jumping ex, Tom Cruise, has managed to maintain his most-wanted status as an action hero at age 50-plus in films like "Mission: Impossible - Rogue Nation," the one-time sweetheart of TV’s “Dawson’s Creek”  keeps struggling to find film roles that offer much substance.

Though Holmes showed early promise as she transitioned from TV to the big screen in 2000’s “Wonder Boys” and 2003’s “Pieces of April,” the now-37-year-old actress has had to settle for a run of thankless mother-girlfriend-wife parts including those in Adam Sandler’s wretched “Jack and Jill” and non-starter dystopian yarn “The Giver.” But perhaps her luck is changing. Last year, Holmes proved she still could stand out in an ensemble with a juicy recurring role on Showtime’s crime drama “Ray Donovan," and became a first-time director with the upcoming "All We Had," which she also stars in. Even better, in her latest film "Touched With Fire," she delivers a beautifully understated and moving performance as a poet suffering from bipolar disorder, who falls in love with a fellow psychiatric patient with similar creative passions.

To be sure, the story is a bit of a downer, and the thematic device of manic depression inches close to overkill, as with films like "I Smile Back" or "Silver Linings Playbook." But writer-director Paul Dalio—backed by his New York University film school mentor and executive producer Spike Lee—manages to avoid the trap of glamorizing the illness while still illuminating why authors, poets and painters such as Lord Byron, Emily Dickinson, Van Gogh, Edvard Munch, Tchaikovsky, Ernest Hemingway and Virginia Woolf have been inspired by their manic episodes. Although not exactly based on Kay Redfield Jamison’s well-regarded 1993 book of the same name, the plot is driven by her research into how being bipolar affects artistic personalities, for good and bad, as the lead characters wrongly regard it as their excuse to toss away their meds and indulge their over-amped imaginations and bouts of insomnia.

Nor are there any power-tripping Nurse Ratcheds to be seen, as Carla (Holmes), who has published a book of her works, lands in psychiatric hospital and meets her seeming soulmate, the far more frenetic and anti-social Marco (an impressive Luke Kirby of TV’s “Rectify” and “Show Me a Hero”). At first, they butt heads during a group therapy session but soon connect over his adoration of Van Gogh’s “Starry Night.” Turns out, she is obsessed with the sun while he connects with the moon—his rap name at poetry slams is Luna, derived from “lunatic”—and together they take a mental journey into their own version of outer space, nicely visualized by Dalio.

But the unhealthy side effects of their closeness as they feed each other’s far-out fantasies cause their doctors and worried parents (Griffin Dunne as Marco’s father and Christine Lahti and Bruce Altman as Carla’s mom and dad) to force them apart, leading to depression and thoughts of suicide. They decide to escape and live by their own rules, only to be eventually forced to face a situation that requires them to be level-headed adults, complete with responsibilities and adherence to a mood-flattening pill regimen. That turns out to be easier for Carla than Marco, who is convinced his illness is a gift and covets his mania.

It is impossible not to think of similar films featuring patients with psychological problems who are drawn into co-dependent relationships, such as the ‘60s chestnut “David and Lisa” or even “Girl, Interrupted.” But “Touched With Fire” is perhaps most like the cancer-themed romantic drama “The Fault in Our Stars,” including an appearance by an author (in this case, a cameo by Jamison) revered by the central couple who turns out to be a disappointment in person.

But while “The Fault in Our Stars” was a gloriously shameless high-end tearjerker, “Touched With Fire” acts more as a damper to such tissue-required emotions, given its rather honest portrait of such suffering. Some humor enters the picture early on, especially when we first meet a babbling Marco as he decides to quit his job and insists he can subsist on only ketchup and milk purloined from fast-food joints. But Dalio, who is bipolar himself, takes his portrayal of the illness very seriously and leaves very little room for light-heartedness.

What joy there is can be found in observing Holmes, haggard and subdued as she bares her soul, playing off Kirby’s more animated performance as they form a realistic bond. We want them to be together even if it is clearly foolish to hope for a happy ending. However, “Touched With Fire” suffers when it goes beyond interior spaces and enters the streets of New York as well as, at its weakest point, an unidentified expanse of wilderness. The intimacy that graces its best scenes becomes somewhat muted when the action awkwardly moves to the outside world.

It might be opening on Valentine’s Day weekend, but don’t mistake “Touched With Fire” for a date-night treat. Still, anyone who cares about Holmes will be happy to see her front, center and back in fine form. 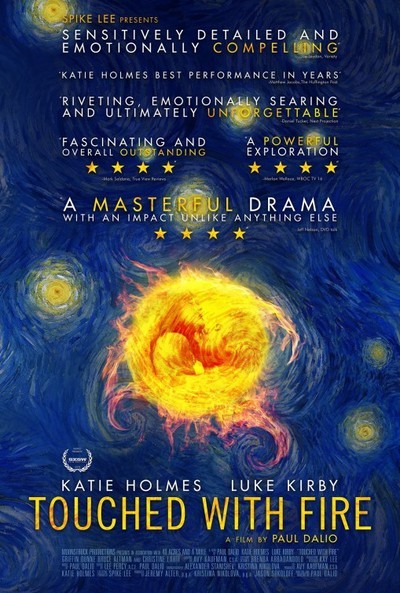 Rated R for language, a disturbing image, brief sexuality and drug use.