Sarah Silverman has made her name with a raw brand of stand-up comedy that’s couched in a girly sweetness. She delivers her pointed satire of racism and sexism with a wink and a smile. With a tomboy’s baseball T-shirt and ponytail belying her fierce femininity, Silverman can charm and shock you in the same breath, but there’s always truth to her words.

She seeks an even more disturbing truth and goes to even more daring extremes in “I Smile Back,” a drama that asks her to lay herself bare in every sense of the word. Silverman already has dipped her toe into these darker waters in Sarah Polley’s excellent 2011 drama “Take This Waltz,” in which she stood out in a supporting role as a recovering addict. Here, she plays a woman who’s gripped not only by an addiction to drugs, alcohol and sex but also by a larger sense of self-destruction. As dangerous as the downward spiral is, there’s a certain comfort in its familiarity.

Silverman is so committed and convincing that she makes you wish there were more to her character, more to her story. The barebones film from director Adam Salky, based on the novel by Amy Koppelman (who co-wrote the script with Paige Dylan), could have used more context, more cohesion. It feels rushed at 85 minutes and features an abrupt ending that goes beyond intriguingly ambiguous to enormously unsatisfying. Truly, the movie just … ends. But even before that, the narrative consists of an uneven mix of powerful moments and random happenings. Individual scenes can be tense but the arc as a whole lacks momentum. “I Smile Back” should have been devastating. Silverman is willing to take you there. What it ends up being is frustrating.

Part of the problem is that we know from the very first scene that Silverman’s character, Laney Brooks, is a mess. She’s snorting coke in her underwear in the bathroom while her husband plays basketball outside with the kids. There isn’t much farther to fall. On the surface, though, Laney would seem to have it all: She is the picture of upper-middle class suburban New York bliss. She has a loving, loyal husband in Bruce (Josh Charles), an insurance salesman, and two adorable kids: Eli (Skylar Gaertner) and Janey (Shayne Coleman).

But as it turns out, the drug habit isn’t just an occasional pick-me-up—it’s the tip of the iceberg. She routinely messes up the kids’ school drop-off in the morning, then dashes off as fast as she can for a lunchtime tryst at a trendy hotel with a fellow, married school dad/cocaine aficionado (Thomas Sadoski) who insists he’s in love with her. As for her own marriage, it’s depicted so vaguely that it’s hard to know what’s kept the couple together for so long, despite Bruce’s clunky and wedged-in retelling of their newsstand meet-cute; the kids, meanwhile, are mere concepts.

Following one of Laney’s booziest, sloppiest nights (which includes a truly unsettling use of her daughter’s teddy bear), Bruce drives her to rehab someplace snowy and secluded. In theory, she should be just fine in 30 days, right? Not quite—and this section of “I Smile Back” is a prime reflection of what plagues the movie as a whole. It zips by too quickly—we barely see her anguish, we don’t see her do the work to heal and we only skim the surface of the underlying depression that drives her reckless behavior. In short, it stems from her father’s abandonment of her at age 9—but we barely get a grasp of who this woman was before she was teetering on the edge of collapse at age 39. She is defined almost exclusively by her substance abuse and underdeveloped as an actual human being otherwise. 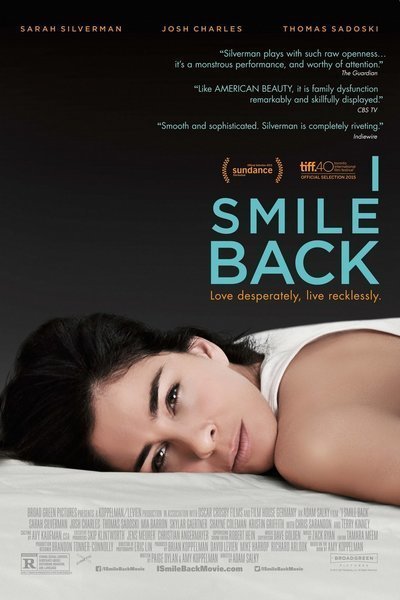