The Tom Cruise-ist moment in the history of Tom Cruise films was the one in "Mission: Impossible - Ghost Protocol" where Tom Cruise's super-agent escaped a 9/11 style bombing of the Kremlin and a false arrest as the main suspect and reunited with his commanding officer and said he was pretty sure he spotted the real bomber while sneaking around the Kremlin, then grabbed a pen and in five seconds drew a sketch on his palm that looked exactly like the guy. You believed it, of course, because it was Tom Cruise doing the drawing. If American films have proved anything, it's that Tom Cruise is The Best: at pool, at flying jets, at mixing cocktails, at racing cars, at building an airtight legal case against brutal Marine colonels and southern gangsters, at whipping sexist bros into a frenzy, at representing football players in contract negotiations, at defending Earth against invasion by extra-dimensional monsters and, in the "Mission: Impossible" series, at battling heavily armed bad guys while running and jumping and fighting and driving and hacking and playing “Flight of the Bumblebee” on the violin if need be.

I'm going to call him Tom Cruise during the rest of this review of "Mission: Impossible - Rogue Nation" because even though his character has a name, Ethan Hunt, it is really Tom Cruise who makes his entrance clambering over a hill and exhorting his lovable tech guy Benji (Simon Pegg) to use his hacking skill to open the door of a cargo transport plane that's about to take off with a belly full of nukes stolen by Chechen separatists or something, I don't know who they are, it doesn't matter, Tom Cruise is running, arms and legs pumping, hair flying, and holy mother of moley he's climbing onto the top of the plane and hanging to its underbelly as it takes off, with his bare hands!

I forgot to say that Tom Cruise works for the International Monetary Fund, sorry, the Impossible Mission Force (they keep saying "IMF," it's confusing). The plot? Fine, the plot: CIA director Alec Baldwin wants to disband the IMF. He believes Tom’s people are just a bunch of mavericks, meatheads too impulsive to send to Top Gun. “Your unorthodox methods are indistinguishable from chance,” a government official tells them, “and your results, perfect or not, look suspiciously like luck.” So the IMF is disbanded, over the objections of Tom Cruise’s buddy and fellow butt-kicking super-agent William Brandt (Jeremy Renner), who I guess is his superior, and—I have no idea what happened in this movie. Something about Spectre, or Hydra, or The Syndicate. Yes, that’s it, the Syndicate, a group comprised of rogue agents who are sneaking all around the world blowing things up and killing heads of state and destroying major companies and taking candy away from little kids on Halloween, too! Just swooping down out of the sky, on jet packs, and stealing their candy! OK, they didn’t do that last thing. But they did everything else on the list. These are really bad people! There could not be a worse time to tell Tom Cruise, “Hey, you stink, you can’t save the world anymore.”

Tom Cruise gets knocked around in this film even more brutally than in the last one. He gets captured by some of these Syndicate people and hung by his wrists in a dank makeshift cell and beaten by a goon known as Janik “Bone Doctor” Vinter (Jens Hultén). He dives into a centrifuge chamber full of water to re-key a security system so that Benji can sneak into the top-secret data storage base above, and reprogram the something or other so that they can do that thing and get the thumb drive and breach the firewall, or something. Only Tom Cruise can go into the water chamber because you have to be able to hold your breath for three minutes and seriously, who can do that besides Tom Cruise?

Tom Cruise goes on high speed chases involving phalanxes of motorcycles and cars making hairpin turns and galumphing down stone steps in Istanbul, or is it Paris, or London? The filmmakers always tell you the city plus the country—like they really needed to say “Vienna, Austria,” so that you didn’t look at the Vienna State Opera house and think you were in Vienna, Virginia—but as in the James Bond and Jason Bourne films, the location is not of much importance, except insofar as it can supply landmarks for Tom Cruise and his enemies to fight in, race through and occasionally level.

This movie is written by Brent Staples and Drew Pearce and rewritten and directed by Christopher McQuarrie, screenwriter of "The Usual Suspects", so it should come as no surprise that as the movie unreels, the main bad guy Solomon Lane (Sean Harris) and his goons and the members of the IMF all start to seem like variations on Keyser Soze, a man-wraith who changed faces and stories and could be anybody. Tonally, this is a different experience from the last "Mission: Impossible" movie, "Ghost Protocol," which felt like an immense machine, or contraption, with each line and shot building into a self-contained sequence: a touch of Buster Keaton. "Rogue Nation" feels like it could’ve been a movie by Keaton’s most fervent disciple, Jackie Chan, who gifted the human race with the likes of "Project A" and "Supercop." It has a loose, hurtling quality. Despite all the bone-breaking violence, its touch is light.

McQuarrie, who last worked with Cruise on the excellent "Edge of Tomorrow," underplays his directing flourishes just as cannily as Cruise underplays his feats of strength and guile. The idea of action movies as musicals gets a workout during the opera house sequence, and the script pushes the idea of spies as performers to its logical end, hinging scenes on whether agents can lie to other agents, or pretend to be other people, or even imitate someone’s gait in order to fool an identity scanner. But these thematic touches and others aren't italicized. They're just part of the experience.

McQuarrie understands that these films are essentially tall tales with a sense of humor, skating on the edge of parody at all times while maintaining a poker face. Tom Cruise is 53 now, and even though he looks great (he’s all sinew), the fact that he’s aging out of the action hero demographic lends a poignant aspect to the escalating absurdity of this series. If you watched all of the "Mission: Impossible" films in a row, starting with 1996’s original, would they feel like a James Bond version of "Boyhood"? Maybe. The unifying, meta-fictional subject of all five is whether there is anything Tom Cruise can’t do, and if he can continue being awesome even as his face sags and his hair turns gray and young moviegoers stop caring about him. (There is a precedent: Randolph Scott. Even in his sixties, he was starring in Western adventures where he kicked 172 different kinds of butt, often while wearing the same shirt throughout.)

There’s a lot of dry humor in the movie that could be described as Howard Hawksian: character moments and story beats that are all about camaraderie and professionalism under pressure. At one point Tom Cruise realizes that in order to save the world, he and his IMF team, which includes the porkpie-hatted hacker Luther Stickell (Ving Rhames), will have to kidnap a head of state, and they only have a few hours to figure out how to do it. Brandt grouses for maybe 10 seconds before remembering that it’s Tom Friggin’ Cruise doing the asking, then accepts his fate.

Aficionados of the super-agent's instant-mugshot sketches will be pleased to learn that they appear in this film as well. I have no idea if these drawings are really by Tom Cruise, but if it turned out that they were, would you be surprised? When CIA agents burst into one of his hideouts and find two new sketches plus a wall of photos and documents arranged like a mixed media collage, it's as if riot police had barged into an art gallery. I almost expected somebody to offer them white wine and brie.

The most surprising aspect is that, beneath it all, the movie is a love story of sorts. Tom Cruise meets his match in British agent Ilsa Faust (instant star Rebecca Ferguson), a long legged, dark haired beauty who is for all intents and purposes the female Tom Cruise. Not only can she shoot and drive and fight as well as Tom Cruise, she shares his action deadpan. We are never sure if Ilsa is on his side or the Brits’ or perhaps the Syndicate’s. She keeps catching him and freeing him, beating him down and saving his life. Cruise’s mix of bafflement and curiosity as he contemplates Ilsa (yes, there is a Casablanca sequence in the movie, how could there not be?) quickly stops having anything to do with espionage. In time the film becomes a droll, bizarrely asexual screwball comedy about good-looking spies who express their unconsummatable love for each other through feats of violence, bravery and self-sacrifice. If one of the characters wasn’t female, you could call this a bromance.

The soundtrack occasionally quotes the opera that unfolded during the Vienna sequence: Puccini’s "Turandot," about a stubborn prince and princess who spend the whole story testing each other. Late in the film, Tom Cruise and his leggy doppelganger are sitting together at a café table while surrounded by killers, and the sound drops out completely, and McQuarrie’s camera goes close to their faces, and they exchange a look. It’s the same kind of look that John Woo’s and Sergio Leone’s characters used to exchange before drawing their guns and shooting their way out of a tight spot. It is a look of shared understanding: one superior being acknowledging another. Alec Baldwin describes Cruise, hilariously and also accurately, as “the living manifestation of destiny,” but the phrase could apply to Ilsa as well, and to this glorious film, which knows exactly what it wants to be and makes damn sure that Tom Cruise never stops running. 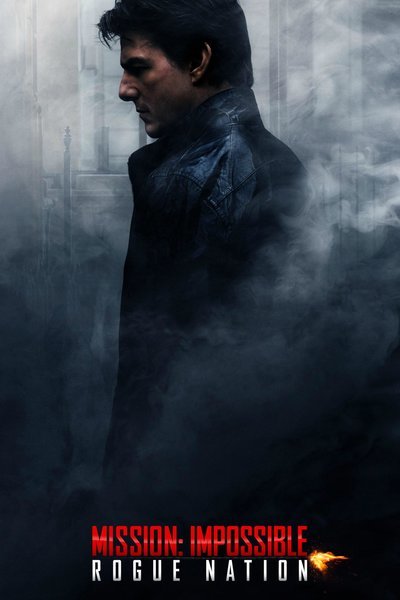 Rated PG-13 for sequences of action and violence, and brief partial nudity