The Fault in Our Stars

It should be agonizing, this tale of doomed love between cancer-stricken teens. It should be passionate, engrossing, suspenseful, something—even unabashed melodrama would have been appropriate, given the subject matter.

Instead, the film version of the best-selling novel "The Fault in Our Stars" feels emotionally inert, despite its many moments that are meant to put a lump in our throats. Perhaps it’s trying so hard to bludgeon us over the head and make us feel deeply that the result is numbing instead. There’s something just off about it for the vast majority of the time—an awkwardness to the staging, framing and pacing in director Josh Boone’s adaptation of author John Green’s tear-jerking, young adult phenomenon, and a need to spell everything out.

So much of what worked on the page—and made Green’s writing so lively and engaging—gets lost in translation and feels uncomfortably precocious when actual people actually say his words out loud. (Screenwriters Scott Neustadter and Michael H. Weber, who also wrote the romantic charmers "(500) Days of Summer" and "The Spectacular Now," remained very faithful to the book, which should make the core tween/teen fan base happy. Okay? Okay.)

There’s a specificity to Green’s language; his characters are hyper-verbal, self-aware and fiercely biting in the tradition of "Heathers" and "Clueless." They know all too well that pop culture depicts cancer—especially young people with cancer—in a mawkish manner that they refuse to accept as they regard their own conditions. But while the flip, jaunty verbosity they use as a shield produces some pleasingly acerbic humor, it often feels forced and false in this setting.

Still, Shailene Woodley’s abiding, disarming naturalism consistently keeps you engaged. She just doesn’t hit a false note. Following winning turns in the indie dramas "The Descendants" and "The Spectacular Now," and the blockbuster "Divergent," Woodley continues to cement her accessible and likable on-screen persona. Her work is so strong, it makes you wish she had a better performance to play off of to create the sparky chemistry at the heart of this story.

Woodley stars as Hazel Grace Lancaster, a 16-year-old Indianapolis girl who’s diagnosed with cancer at 13. It weakens her lungs, forcing her to drag an oxygen tank behind her wherever she goes and to stop to rest after climbing a flight of stairs. While her situation looked bleak a few years ago, participation in a new drug trial has prolonged her life for an indefinite amount of time. Her parents (Laura Dern and Sam Trammell, with whom she shares some lovely, honest moments) try not to hover over their daughter as she attempts to maintain some vague semblance of teenage life, and they even share her fondness for using dark humor to defuse difficult moments.

Mom insists that Hazel attends weekly cancer support group meetings (where comedian Mike Birbiglia is the amusingly earnest leader). There, she meets the handsome and equally loquacious Augustus Waters (Ansel Elgort, who coincidentally played Woodley’s brother earlier this year in "Divergent"). A former high school basketball star, Augustus lost his right leg below the knee to the disease and now walks with a prosthetic. In Hazel, he immediately recognizes a kindred spirit: a quick-witted smart-ass who can’t take any of the feel-good platitudes seriously.

While Woodley navigates the complexity of Green’s dialogue with ease, Elgort seems stiff and uncomfortable by comparison. His character is meant to be a bit pompous and formal in the beginning but instead comes off as nervous, and even seems to be rushing or slurring his lines at times. Elgort is boyishly handsome (in a way that’s distractingly reminiscent of "Love Story"-era Ryan O’Neal, actually) but never quite radiates the charisma required to keep up with Woodley. Their pairing feels like a missed opportunity.

Hazel and Augustus’ shared love of reading inspires a trip to Amsterdam to seek out the reclusive writer of Hazel’s favorite novel, the fictitious "An Imperial Affliction," which also happens to be about a young woman living with cancer. Willem Dafoe brings a jolt of creepiness to the role of the alcohol-addled author, a rare sensation in a film that too often feels tidy. Their visit also sets the stage for the oddest scene of all (in both the book and the film) when Hazel and Augustus share their first kiss before an applauding crowd of tourists in the attic of Anne Frank’s house. Yeesh.

Yet we know this bliss can’t last. And so "The Fault in Our Stars" descends into major hanky territory with an overpowering assist from a nearly omnipresent soundtrack of wistful alt-rock tunes that tell us what to feel, and when, and how much. (I will happily admit to having tears stream down my face during the third act of Green’s book but, alas, did not get choked up here.)

Theoretically, these iconoclasts wouldn’t want their story to be told in such obvious and heavy-handed fashion. To borrow their favorite line from Hazel’s favorite book: "Pain demands to be felt." 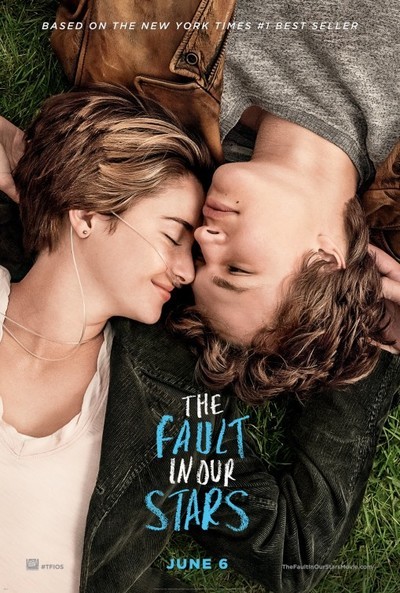