Ragged around the edges and haphazardly hilarious though it may be, “Top Five” ultimately satisfies as an often raunchy ramble about celebrity, sobriety, selling out and sex, courtesy of the immensely talented but too-often subpar movie star Chris Rock.

As befits this comedian who rarely feels the need to censor himself while riffing onstage or sounding off in an interview, there is both a frankness and a personal investment in this, his third directorial feature-film effort, that was sorely missing in 2003’s “Head of State” and 2007’s “I Think Love My Wife.” The need for “rigorous honesty”—a tenet insisted upon by Alcoholics Anonymous—is mentioned at some point and it often applies to what shows up on screen, too.

Being on the brink of 50 can push an artist to take a good hard look at their career. And Rock probably doesn’t want to have his film legacy be ultimately summed up by a handful of lowbrow Adam Sandler comedies and three stints as a chatty cartoon zebra in the “Madagascar” franchise, as profitable as those outings might have been.

So he reaches for “Stardust Memories” self-reflection along with some “Before Sunrise”-style walkabouts around Manhattan as a day-in the-life version of himself: a brilliant stand-up comic turned hack Hollywood movie clown named Andre Allen (like Rock, once declared “The Funniest Man in America” by “Time” magazine), who is exhibiting all the signs of a midlife crisis.

“I don’t feel funny,” Andre tells an assistant. And who would after satisfying a hungry bottom-feeding public in a trio of monster-hit cop-buddy romps in an animal getup as Hammy the Bear? His catchphrase during arrests? 1“It’s Hammy time!” It’s akin to Tom Hanks playing Hooch instead of Turner while donning a mangy dog costume.

However, his choice to go legit with “Uprize!,” a wrongheaded historic epic about a slave revolt that results in a sea of dead white people, doesn’t look as if it’s going to turn his frown upside-down despite his hopes that it will become the Haitian answer to “Django Unchained.” Making matters worse is his having to engage in satellite radio interviews and a full-on press junket while answering the same inane questions repeatedly, especially about whether there will be a “Hammy the Bear 4.”

As someone who has experienced this medieval media ritual numerous times, what Rock presents cuts pretty close to the truth—especially when some of the more notorious journo junketeers show up unbilled (hey, it’s Stephen Schaefer!). Adding to Andre’s misery is a pending tabloid wedding to a demanding and desperate Bravo reality star (Gabrielle Union, stunning in her shallowness) that clearly is more of a publicity stunt than a fairy-tale relationship.

What is likely to get the biggest rise out of audiences—including some who may bolt for the exit—are the outlandish bouts of randy antics. They include a flashback depiction of Andre’s self-declared rock-bottom moment fueled by a booze binge. It involves Cedric the Entertainer as a sleazy Houston concert promoter cavorting with two hookers amid a storm of pillow feathers in the comic’s hotel room, and, afterwards, the sight of Rock uncomfortably curled up in a fetal position as to avoid the massive stains left on his bed sheets. The only sequence that can top that is an act of revenge that involves the insertion of a hot-sauce-soaked tampon where the sun doesn’t shine.

But for all that down-and-dirty business, what I most appreciated about “Top Five” was the very human and adult connection between Rock and Rosario Dawson as a “New York Times” reporter named Chelsea Brown, who is doing a profile on Andre by trailing him for the day.

Most filmmakers barely know how to capitalize on Dawson’s talents other than to fill up the screen with her goddess-like beauty. But Rock treats her single mom who boasts a checkered romantic past along with strong opinions as an equal sparring partner, and even starts the film with a cold opening of the pair strolling the city streets while debating the state of the world.

Yes, some of the ethical questions involved in this relationship that go beyond the attraction they eventually share end up being quite troubling if not ridiculous. But the palpable natural rapport between the two actors goes a long way to mask such flaws, including Chelsea’s reaction to Andre’s conspiracy theory that the original 1968 “Planet of the Apes” was linked to the assassination of Martin Luther King Jr.

“Top Five” also benefits from a parade of cameos, with Rock capitalizing on his considerable showbiz connections to recruit an amazing lineup of name talent in small roles. That includes Kevin Hart as an agent (who provides a short yet pungent phone rant), JB Smoove as a bodyguard/chauffeur, Ben Vereen as Andre’s dad, Sherri Shepherd as his ex-girlfriend and a pre-accident Tracy Morgan as an old acquaintance.

There is a tender undercurrent to the raucous goings-on, which includes the jokester trifecta of Whoopi Goldberg, Jerry Seinfeld and Adam Sandler as themselves while attending Andre’s bachelor party at a seedy neon-lit strip club. Eavesdropping on these comics as they discuss the virtues of pre-nups and offer marital tips to the man of honor is pure gold.

As for the film’s title, it is derived from a party pastime where players rank their all-time favorite rappers along with a sixth alternate. If you were to list "Top Five"’s best surprises, No. 1 might be an appearance by a notorious gangsta rapper with a long history of arrests who croaks Charlie Chaplin’s heartbreaking anthem “Smile” while behind bars.

Earlier, Andre describes Chaplin as one of his influences: “He started this shit—he’s the KRS-One of comedy.” Slapstick and sweetness. Raunch and romance. As a filmmaker, Rock has finally found the yin to go with his yang. 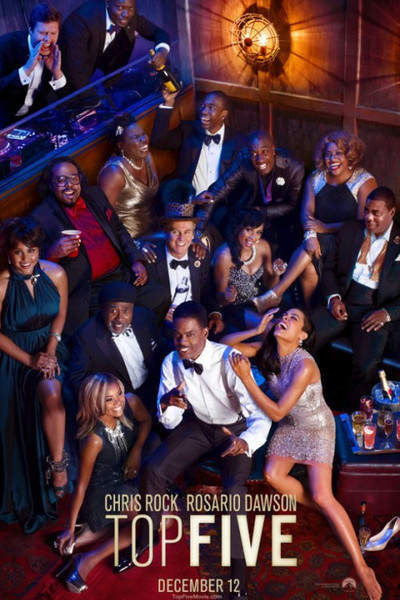 Rated R for strong sexual content, nudity, crude humor, language throughout and some drug use