The movie begins by acknowledging its sources of visual inspiration. We see a claustrophobic Allen trapped in a railroad car (that's from the opening of “8 1/2,” with Marcello Mastroianni trapped in an auto), and the harsh black-and-white lighting and the ticking of a clock on the sound track give us a cross-reference to the nightmare that opens Ingmar Bergman's “Wild Strawberries.” Are these the exact scenes Allen had in mind? Probably, but no matter; he clearly intends “Stardust Memories” to be his “8 1/2,” and it develops as a portrait of the artist's complaints.

Most of the action of the film centers around two subjects. The first is a weekend film seminar (obviously patterned after Judith Crist's weekends at Tarrytown, N.Y.), to which the Allen character has been invited. The second subject is a very familiar one, Allen's stormy relationships with women. The subjects blend into the basic complaint of the Woody Allen persona we have come to know and love, and can be summarized briefly: If I'm so famous and brilliant and everybody loves me, then why doesn't anybody in particular love me?

At the film seminar, the Allen character is constantly besieged by groupies. They come in all styles: pathetic young girls who want to sleep with him, fans who want his autograph, weekend culture vultures, and people who spend all their time at one event promoting the next one they're attending. Allen makes his point early, by shooting these unfortunate creatures in close-up with a wide-angle lens that makes them all look like Martians with big noses. They add up to a nightmare, a nonstop invasion of privacy, a shrill chorus of people whose praise for the artist is really a call for attention.

Fine, except what else does Allen have to say about them? Nothing. In the Fellini film, the director-hero was surrounded by sycophants, business associates, would-be collaborators, wives, mistresses, old friends, all of whom made calls on his humanity. In the Allen picture, there's no depth, no personal context: They're only making calls on his time. What's more, the Fellini character was at least trying to create something, to harass his badgered brain into some feeble act of thought. But the Allen character expresses only impotence, despair, uncertainty, discouragement. All through the film, Allen keeps talking about diseases, catastrophes, bad luck that befalls even the most successful. Yes, but that's what artists are for: to hurl their imagination, joy, and conviction into the silent maw. Sorry if I got a little carried away. “Stardust Memories” inspires that kind of frustration, though, because it's the first Woody Allen film in which impotence has become the situation rather than the problem. This is a movie about a guy who has given up. His relationships with women illustrate that; after the marvelous and complex women in “Annie Hall” and Manhattan, in “Stardust Memories” we get a series of enigmas and we never really feel that Allen is connecting with them. These women don't represent failed relationships, they represent walk-throughs.

Woody Allen has always loved jazz and the great mainstream American popular music. There's a lot of it in “Stardust Memories,” but it doesn't amplify or illustrate the scene this time it steals them. There's a scene where Allen remembers a wonderful spring morning spent with a former love (Charlotte Rampling), and how he looked up in his apartment to see her there, and for a moment felt that life was perfect. As Allen shows that moment, Louis Armstrong sings "Stardust" on the sound track, and something happens that should not be allowed to happen. We find our attention almost entirely on Armstrong's wonderfully loose jazz phrasing.

“Stardust Memories” is a disappointment. It needs some larger idea, some sort of organizing force, to pull together all these scenes of bitching and moaning, and make them lead somewhere. 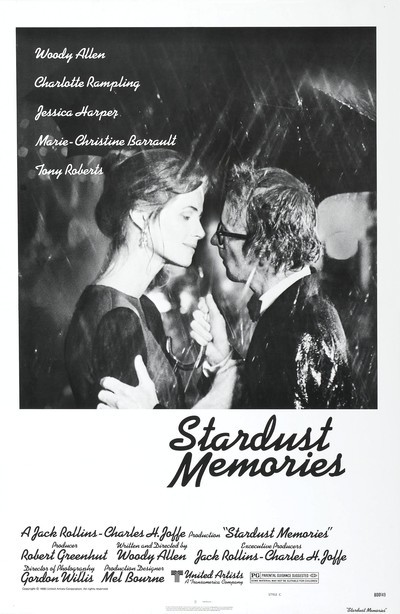