Leslie isn't circling the bottom of the drain yet, but she's sunk pretty low.

We first meet the title character of "To Leslie" (Andrea Riseborough) in an opening credits montage of photos showing what life was like before. Leslie got married, had a son, won $190,000 in a lottery and then burned through it all. The main story picks up seven years after the lottery win. Leslie's life is dire. She's an alcoholic loner skating on the edge of oblivion. When she gets evicted from the seedy motel she's been living in, she stuffs her few belongings in a pink suitcase and drops in on her now-19-year-old son James (Owen Teague) at his apartment in the city.

James isn't happy to see her. Nobody's happy to see Leslie. Leslie is an alcoholic who'll do any other substance within reach. She can't borrow from anyone anymore because she owes everyone money. She's ruled by her urges and appetites, so she doesn't even pause to consider the rules and norms she's breaking in order to satisfy them. Sometimes she'll muster whatever confidence she has left and go into a bar or roadhouse looking to catch a man's eye and get him to take her home. It's not the sex she's after, it's the money, attention, and substances the men might provide.

James warns his mother upfront that she's welcome to stay with him until she gets her life together. But that she can't live with him, and the only rule in in his house is that she can't drink. You know how that turns out.

Leslie eventually finds her way back to her rural hometown, the place where she won the lottery, and where she is thought of as, in her words, "a piece of shit." What did she do to feel that way about herself? It's not a mystery, and screenwriter Ryan Binaco and director Michael Morris don't treat it as one, because this is a story about people who could actually exist, and don't discuss the past in detail unless there's a reason to.

Things do get better for Leslie, but the first section of film is hard to watch as it establishes the heroine's network of damaged (or shattered) relationships (including her ex-friends Nancy and Dutch, played by Allison Janney and Stephen Root) and show the darkness she swims in every day. When she finds her way to a little old motel run by a benevolent man named Sweeney (Marc Maron) and his goofy partner Royal (Andre Royo), we see a glimmer of hope on the horizon. The question is whether Leslie can see it, too.

Sweeney and Leslie are a great screen team. He's as pleasant, uncomplicated, and straightforward as Leslie is mercurial, tortured, and internalized. Sweeney is as generous as Leslie is grasping and manipulative. After initially chasing her from the property, Sweeney offers her a job as a maid and throws in a room for her to live in. He even pretends to have mistaken Leslie for somebody who'd been applying for the maid job, which gives Leslie a little gift of dignity before she's even gotten to know him.

Often characters who are this nice turn out to be hypocrites, exploiters, or worse. But Sweeney's a good person who seems to want to make everyone's life better, even if it means losing money and getting personally hurt. Sweeney knows what he's getting into; we eventually get a backstory that explains why he's so kind and nonjudgmental around people with Leslie's problems, even when she's at her most frazzled and pathetic. And yeah, you guessed it, he's sweet on her, and Riseborough and Maron have such immediate, easygoing chemistry that you know there's no way the film will be able resist the temptation to pair them up for a happy ending, even though in real life a relationship like this is equally likely to end with the police or fire department pulling up at the hotel in the wee hours.

In the love story aspect, as in others—such as Nancy's cartoonish single-minded determination to publicly humiliate the heroine whenever she can—"To Leslie" makes choices that are more conventional than one might wish for, especially considering how efficiently the film rivets our attention simply by creating a psychologically plausible adult woman and letting us watch her exist.

The character of Leslie and Riseborough's performance in the role are greater than the film that surrounds them. Some of "To Leslie" has a kind of heartwarming 1990s Sundance-indie feel, though the unpretentious acting and filmmaking, especially during the raw first act, disguise that. The longer the movie goes on, the more predictable its story becomes—and all told, there's too much early degradation and not enough scenes showing Leslie doing the hard work of righting her own ship. The balance seems off, and there's probably a whole other, more surprising movie hiding inside that "Ten Months Later" ellipse near the end.

Still, this is an impressive character portrait. Leslie often acts as if any hand extended to her is an opening to get more. (She doesn't just ask Sweeney for an advance on pay for a job she hasn't started yet, she gets him to hand her cash on the spot.) And she has trouble delivering on promises she makes and duties she accepts. Sooner or later, she brings chaos and sourness to every interaction. The result is syllogism, or a self-fulfilling prophecy: something like, I am a disaster, therefore I make disasters. Of course Leslie is not as bad as her worst enemies say (or as that voice in her head keeps insisting), but she's guilty of grave offenses, and the film (mainly through Sweeney and Nancy) refuses to let her off the hook for them. (Maron's own, much-discussed experience as a recovering alcoholic lends some of Sweeney's dialogue more gravitas than it would've had if another performer had delivered it.)

Morris' simple shots and careful staging often focus our attention on what's happening inside Leslie rather than whatever external events are triggering her reaction. The result is more than a mere showcase for Riseborough, who anchors every scene. Her performance is so determined not to pander to the audience or celebrate her own virtuosity that it often makes you feel as if you're seeing not an established international actress, but a newcomer playing a version of herself.

Morris' direction offers other filmmakers a template for how to make a small movie that feels big, just by making definitive choices and sticking to them. In an early scene, Leslie is present for a brawl in a hallway: we see her in-focus in the foreground, reacting in profile as the fight happens out-of-focus in the background. In a later scene, Leslie spends the night in an abandoned ice cream shack across from the motel and watches through a slat in the blinds as Royal, an acid-head and conspiracy theorist, bays at the moon in his undershorts and then races across the parking lot to give Sweeney a hug. There are only two shots in the sequence: Leslie watching, and her point-of-view of people doing things far away (the extreme distance makes their actions funnier).

The film's tour-de-force, for the lead actress as well as the filmmakers, is an unbroken tracking shot of Leslie sitting at a bar at closing time, listening to a song whose lyrics seem to be a withering comment on her life ("Is this a joke?" she says to the ceiling) then listening to the entire song as the camera inches closer to her. This isn't the moment when things turn around for Leslie, but it's the start of the start of something better. Riseborough's face lets us imagine all of the decisions and reversals, recriminations and justifications, that might be cycling through the character's mind. As a bravura piece of close-up silent acting, it's up there with Robert De Niro in "GoodFellas" imagining the bloodbath that his character is about to unleash, Diane Lane on a commuter train in "Unfaithful" delightedly recalling a tryst, Nicole Kidman at the symphony in "Birth," and other great moments in acting. Long, uninterrupted closeups of people thinking are a big part of what makes cinema a unique art form, and "To Leslie," to its credit, is built around them. 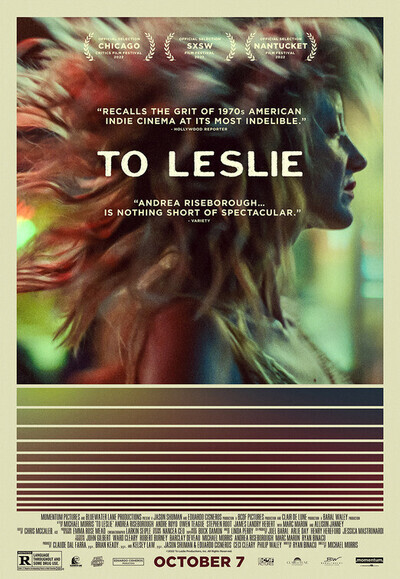 Rated R for language throughout and drug use.