This is Where I Leave You

There is but one member of the dysfunctional clan at the center of the ultimately disappointing “This Is Where I Leave You” who comes anywhere close to being content in life. That would be the potty-training tyke who likes to tote his portable throne outdoors and tend to business while enjoying the Westchester County views. His Zen approach to pooping trumps anyone else’s neurotic whining.

It might also be the reason that “sh—”  is “Night at the Museum” franchise director Shawn Levy’s preferred curse word in his first R-rated comedy.

Also possible: The kid is the most mature person on screen

Otherwise, it is gripe, gripe, gripe and snipe, snipe, snipe, all served family style with a bare minimum of relatability. True, the pleasing presence of comic pros Jason Bateman and Tina Fey, along with It dude of the moment Adam Driver and “House of Card’s” Corey Stoll as a quartet of disgruntled siblings, goes a long way to mask the failings of a script that doesn’t quite do justice to the novel on which it’s based.

Also providing some welcome distraction is the presence of Jane Fonda, more radiant than ever at 76, who is much more at ease with humor now than in her early ‘60s “Barefoot in the Park” starlet days. She is quite amusing as a Mom-zilla, who demands that her children reunite and sit Shiva for seven days following their not-very-religious Jewish father’s death. “You’re all grounded,” she tells her scowling offspring about the ritual that their patriarch supposedly wanted to be observed.

Her Hillary, a child therapist and rampant over-sharer (she extolls her late husband’s sexual prowess to any and all within earshot), is known for her infamous parenting guide, “Cradle and All,” that still has her brood seething over the intimate family secrets she tattled to the world. Meanwhile, Fey’s Wendy, an unhappy homemaker and mom of two (including the aforementioned pooper) with a work-obsessed husband, counters her mother’s insistence on keeping tradition with this observation: “Mom, you're sitting in the exact same spot we put our Christmas tree.”

Somehow, Fonda maintains her dignity even if her character’s recent boob job becomes the object of mockery one (or two or three) too many times. Other actors aren’t so lucky.

Everyone gets one big issue to obsess over, although Bateman–whose Judd was the novel’s narrator–gets a few bonus ones along with being physically knocked to the ground at least three times. His perfectionist Manhattan radio producer has been in a funk ever since discovering that his wife would rather celebrate her birthday by having sex with his boss, a sexist-pig shock jock (Dax Shepard), than blow out the candles on her custom-made cake. No job, no spouse, no home–in one fell swoop. And, as bad timing would have it, no dad, either.

If anyone comes close to making “This Is Where I Leave You” tolerable, it is Bateman. But he has been the best thing about a so-so movie far too often at this point in his career. And the sudden shift into more serious matters latter in the movie are beyond even his talents to pull off.

As for the rest of the cast, Stoll is resentful eldest brother, Paul, who stayed close to home and ran a sporting-goods business with their father. He and wife Annie (Kathryn Hahn) are desperate to have a baby, despite possible infertility problems, and attempt to make one every chance they get. That Annie used to be Judd’s squeeze adds an extra layer to Paul’s anger.

There is always a black sheep in these types of films and Driver fills that role as well as he can as youngest child Phillip, a feckless playboy with a hot car and a hotter older woman on his arm (Connie Britton of TV’s "Nashville," who is a successful therapist just like Hillary, which suggests some Oedipal themes are afoot).

Yes, there are laugh-out-loud one-liners delivered with relish by this crew but they sound as if a writer and not a real person would actually say them. Conflicts grow all the more complicated–and increasingly less interesting–once Judd’s estranged wife and his ex-boss join in the so-called fun. As old grudges are aired and former flames materialize, you can practically predict where it is all heading. That is, save for one doozy of a reveal at the end.

Considering that author Jonathan Tropper did the film adaptation of his best-seller, he has no one to blame but himself. For some reason, the surname of this fractious tribe has been changed from Foxman to Altman–perhaps as an allusion to the cinematic master of such extended ensemble pieces. If so, “This Is Where I Leave You” is what probably would have resulted if Robert Altman ever had the urge to make a TV sitcom after losing his sense of nuance. One that would have been canceled after one season.

There is such a long tradition in these sorts of family-gathering vehicles, ranging from 1938’s “You Can’t Take It With You,” which won the best picture Oscar, to last year’s “August: Osage County,” that it is one of the more difficult genres to pull off. Good for Levy for trying something different. But next time he does an adult-aimed movie, he should also try a little harder. 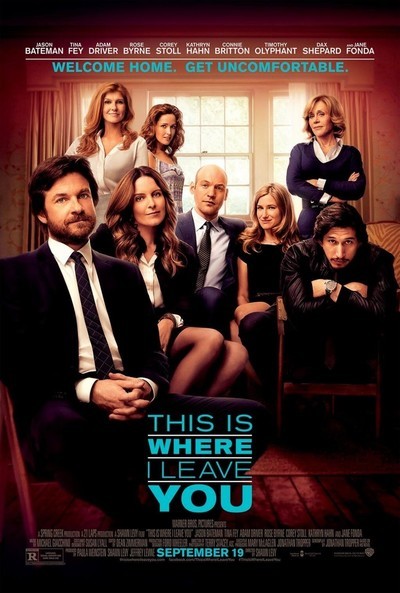 Rated R for language, sexual content and some drug use