O-o-o-o-oh-klahoma! Where the wind comes sweeping out of the mouths of the speechifying members of the quarrelsome Weston clan who have gathered to pay their last respects to one of their own—and disrespects to each other—in "August: Osage County."

Based on the darkly humorous Pulitzer and Tony-winning play by Tracy Letts (who did the adapted screenplay) and directed by John Wells ("The Company Men"), this pared-down film version mostly captures the stormy symphonic interplay of nasty recriminations, mocking taunts and hurtful revelations hurled with corrosive aplomb by a top-notch ensemble of actors.

If the boozy epic confrontations of "Who's Afraid of Virginia Woolf?" or "Cat on a Hot Tin Roof" are your definition of a good time, then this is the place to be. Accusations are shouted, plates are smashed, doors are slammed and casseroles abused. At the very least, you will likely hold your own family in a higher regard this holiday season.

But despite moving a portion of the action outdoors to the flat sun-parched farmland that surrounds the stuffy homestead haunted by the ghosts of grudges past, Wells doesn't completely disguise the stage roots of this cinematic incarnation. He seems too beholden to Letts' dialogue—operatically raw and blistering though it may be—to add his own imprint or allow the camera to take on more of the burden of telling the story.

What compensates for any claustrophobia is a cast that's as bedecked and bedazzled with Oscar trophies and nominations as they come. Those who are especially itching to see Meryl Streep, in her Streep-iest performance ever as spiteful matriarch Violet, go woman-o a woman-o with Julia Roberts, at her least glamorous and most affecting as resentful though reluctantly devoted eldest daughter Barbara, will not be disappointed.

The actresses have co-starred only once before, providing voices for the animated "The Ant Bully." Now, they're in "The Mama Bully." And the sparks-flying interaction between the two is truly the main event. Besides a knockdown, dragged-out dinner-table wrestling match, there's a battle royale during a harrowing catfish luncheon. "Bottom feeders, my favorite," declares Barbara in between snarling enough F-words to scorch even Samuel L. Jackson's ears.

It all begins with calm abruptness: "Life is very long," says Sam Shepard, just right as folksy poet patriarch Beverly as he quotes T.S. Eliot in the opening segment with a voice coarsened by years of alcohol abuse, dusty books and bitter disappointment. He is hiring a caretaker, a silent yet strong young Native American woman (Misty Upham of "Frozen River") name Johnna, for Violet, his ailing spouse. "I drink. And my wife takes pills," he warns. "That's the bargain we struck."

That Violet has cancer of the mouth is an apt metaphor as we soon learn as a doped-up Streep, ghostly pale with whitened chemo-damaged hair, suddenly materializes in a vapor of cigarette smoke and mutters sarcastic insults and crudely curses before promising, "I'll be sickly sweet." Fat chance.

Soon after, Bev goes missing. After his body turns up in a lake, an apparent suicide, the rest of the family descends upon the mausoleum-like homestead for his funeral. Like one of those "We Are the World" all-star charity songs, each performer is a granted a for-your-consideration moment to shine—although with varying degrees of success, especially among the men folk.

There is Violet's bountifully boisterous sister Mattie Faye (Margo Martindale, who smartly carves an earth-mother niche for herself somewhere between Streep's volcanic eruptions and Roberts' slow simmer). Husband Charlie (Chris Cooper, whose meandering attempt to say grace in Bev's stead isn't the awkward triumph it should be) is understandably cowed by the crush of volatile female energy.

One of the best scenes finds Barbara letting off steam with some wine-imbibing girl chat with her siblings: Julianne Nicholson as Ivy, the dark-horse middle sister who stayed behind in Oklahoma, and Juliette Lewis as Karen, a flighty free spirit still trying to find herself as she buzzes from one beau to another. Their sibling rapport—relaxed, slightly raunchy and revitalizing—offers a brief respite between spats.

Faring less well are Ewan McGregor as Barbara's unfaithful husband, Bill, a pretentious college prof who can't help but be dull in this company; Dermot Mulronery playing almost too close to type as Karen's sleaze of a squeeze; and Benedict Cumberbatch, whose semi-shaky take on cousin Little Charlie proves he is better suited to smug know-it-alls than he is at insecure sadsacks.

As the horrifying revelations pile up—including incest, child molestation and mistaken paternity—and the battered participants slink off in despair one by one, "August: Osage County" rightfully boils down to the fates of Violet and Barbara, both left husbandless and damaged by the events. One will be set free by their encounter, the other doomed to repeat the past. Streep might have less to lose and more to gain by going over the top. But it is Roberts, humbly stripped of all movie-star artifice, who comes away the clear winner. 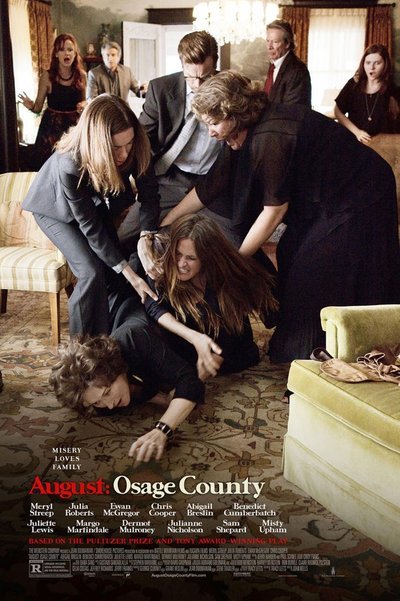