Anton Chekhov warned other playwrights that if a rifle on the wall of a set isn't going to be fired at some point, it shouldn't be hanging there. Substitute a rifle for a poisonous serpent in a box, and you have "Them That Follow."

This debut feature from the writer-director team of Britt Poulton and Dan Madison Savage is set within an isolated Appalachian mountain community of evangelical snake-handlers headed by a preacher named Lemuel Childs (Walton Goggins, who specializes in this kind of role, and played an adjacent version on the Kentucky-set TV drama "Justified"). Lemuel's sect builds sermons and rituals around poisonous reptiles that symbolize Satan, temptation, sin, and other negative forces that can be overcome through prayer, humility, and the love of God and Jesus. The instant you get a look at a mass of those scaly buggers writhing on the forest floor in the opening sequence, you know one of them is going to bite a character—it's just a matter of which one, and when.

So dread of the inevitable hangs over each scene in "Them That Follow." Despite thoughtful characterizations and scrupulous attention to the details of the group's theology and cultural practices, this ends up being another movie in the vein of "Deliverance" or "Winter's Bone," the practical gist of which is, "Don't stray too far from the nearest interstate highway when you're driving through the American South." The script implicitly talks a good game when it comes to cultural relativity, but there's really only one trajectory for this story, which is bad to worse to even worse. The expectation of a potentially lethal snake bite becomes a corollary for impending disaster, brought on by the religious practices of the sect itself.

The film's heroine, Lemuel's daughter Mara (Alice Engert), is engaged to marry a fellow member of the church (Lewis Pullman's Garrett) but was secretly impregnated by an ex-church member named Augie (Thomas Mann), and the big question is whether she's ultimately going to escape from the clutches of her father and his people or succumb to the clearly repressive and superstitious life that she's known since birth.

Still, Poulton, Savage and their key collaborators (in particular, cinematographer Brett Jutkiewicz and editor Joshua Raymond Lee) guide this material with a steady hand, making sure every scene and moment counts and that the supporting characters (including Kaitlyn Dever as Mara's best friend Dilly, whose mother abandoned her, and Olivia Colman as the convert Hope, who's married to Jim Gaffigan's devout Zeke) have important moments and little grace notes. As in other recent American films set in remote white rural communities (including "Mine 9"), and earlier efforts in the same vein like "Sling Blade," you can feel the internal tension that must have beset the project. Returning periodically to those slithering reptiles, and bringing in bits of backstory involving the death of a young boy from snakebite and an ongoing police investigation of Lemuel's church, "Them That Follow" is constantly teetering on the edge of redneck-sploitation, but instead settles into a low-key lament for poor people trapped in impossible circumstances.

Shot in wide format, with a darting handheld camera, mostly with lenses that make the layers of landscape seem to stack on top of each other like the flat planes of a stage set, "Them That Follow" is subtly suffocating, reflecting its characters' distress through filmmaking rather than by having the them repeat endless variations of "I feel trapped." The acting and filmmaking are so much more imaginative than the script (which also falls into the rookie trap of mistaking a lack of humor for seriousness) that in the end, this feels like a dry run for something deeper and more daring. But the funereal gloom of the forest and the earnest anxiety of the performances (particularly by Goggins and fellow "Justified' alumnus Dever) are worth a look. 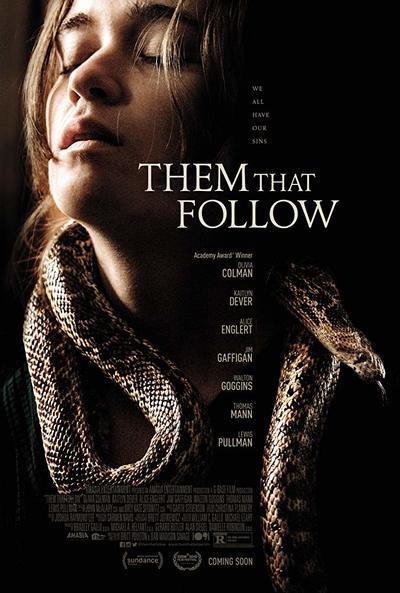 Rated R for some disturbing violence.