When a film opens with a downward swooping shot of Jesus on the cross that ends with a funeral attendee solemnly kissing his feet, chances are it won’t be a laugh-a-minute good time. Somber and sorrowful, “The Wait” proceeds from there like a gorgeous processional that is full of meaningful silences but stubbornly avoids supplying many answers. Occasionally, a ray or two of sunshine seeps in but quickly withdraws when the hard-to-forget truth cannot be ignored.

Perhaps that is as it should be when the topic at hand is grief. Facebook pages and Twitter feeds since the beginning of 2016 have been rife with shared public farewells and eulogies to great artists ranging from David Bowie and Prince to Garry Shandling and Merle Haggard. Not that those expressions aren’t sincere or heartfelt. But it takes a special kind of courage to fully process such a loss on a deeply private scale, especially concerning the untimely death of one’s child. “The Wait” challenges you to stand in judgment while also acknowledging that there is no right or wrong way to cope with such a painful personal tragedy, even if others might get hurt.

The deceased in question is Giuseppe, the son of Juliette Binoche’s Anna, a divorcee whose roomy and remote Sicilian villa supplies the setting for what will soon become a two-woman show. Initially, the windows and mirrors are shrouded in black cloth and the barely lit rooms are filled with silent, mournful visitors. But the downcast mood is broken by the entrance of a stranger: Giuseppe’s pretty girlfriend Jeanne (Lou de Laâge as the very definition of a French ingénue, one whose self-absorbed naiveté is as obvious as her voluptuousness of her red-velvet lips).

Invited to visit over the upcoming Easter holiday by Giuseppe, Jeanne arrives from Paris with no clue that her lover is deceased and therefore speaks of him as if he were still very much alive. Instead of filling her in, Anna lies and says it is her brother who has passed away. She realizes the young girl’s presence is a way to resurrect her son’s spirit, however briefly. That includes listening to the messages that the confused Jeanne continues to leave on the missing Giuseppe’s cell phone, which happens to now be in Anna’s possession. These two very different women have but one thing in common: His absence. But together they can at least summon him in some form.

The up-and-coming Italian director Piero Messina worked as an assistant director on his fellow countryman Paolo Sorrentino’s “The Great Beauty,” winner of the foreign-language Oscar in 2013. While he adopts a less in-your-face approach, Messina similarly relies on a visual language rather than words to stir emotions. Winding roads snaking through mountainous vistas, fog-filled nighttime passageways, darkened hallways, an immense stained-glass window mosaic done in mostly hues of blue, a calm empty expanse of water in the midday heat, the canopies of leaves in a lushly green forest nearby—all relay the sense of stillness that envelops the household.

He could have chosen no better actress to further fulfill this mission than Binoche, who proved herself to be masterful at expressing the nuances of grief early in her career in 1993’s “Three Colors: Blue,” and more recently in “Clouds of Sils Maria.” A mere glance or facial twitch conveys more than any outburst of dialogue could, especially when Anna re-enters Giuseppe’s bedroom for the first time since his demise. De Laâge doesn’t come close to the emoting skills that Binoche possesses, but she has that special look, one that summons a more lissome version of Bridgette Bardot, along with youthful fearlessness on her side.

Clearly restless while awaiting Giuseppe’s never-to-be arrival, Jeanne is taken by Anna to a placid lake where the younger woman quickly strips down to her undies and jumps in. Anna, however, declines, saying, “I’m used to seeing some parts of my body only in the dark.” Soon after, she is shown desperately cradling a pink pool float that was previously abandoned in the courtyard. Anna blows air into it, as if attempting to resuscitate her son. What might have seemed faintly ridiculous in another film is profoundly moving here.

The two ladies fall into a kind of languid routine. They sweat side by side in a Turkish bath, Anna cooks Jeanne food, they visit a museum and, most importantly, they share remembrances of Giuseppe. Jeanne suggests there was some friction between them the previous summer, which might be why she fails piece together the increasingly obvious truth in front of her.

Once Jeanne invites two young men she happens upon to dinner, she and Anna start to form a more benign though similarly vicarious connection as the one between Charlotte Rampling and Ludivine Sangier in gloriously twisty “Swimming Pool.” Wine is consumed, the sounds of female laughter fill the air, delicious homemade pasta is consumed and seductive slow-dancing is performed to Leonard Cohen’s “Waiting for a Miracle.” Life, for a moment, goes on. But instead of a miracle, Anna is confronted by her loyal yet disapproving elderly servant Pietro, who suggests she should drop the ruse.

To fully appreciate “The Wait,” one should not expect grand revelations or even full knowledge of how exactly Giuseppe succumbed. Instead, one must simply immerse themselves as fully as Jeanne does in the lake’s waters and embrace the experience. What Messina lacks in substance in his storytelling, he mostly makes up with raw feelings. We come to care through our own powers of observation, and that might be enough. 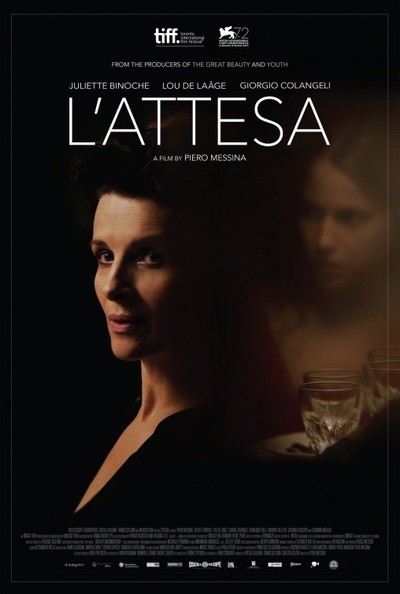